PIPPIN is undeniably spectacular with high-octane choreography and staging, but this 70s revival production has thin moments.
Gina Fairley 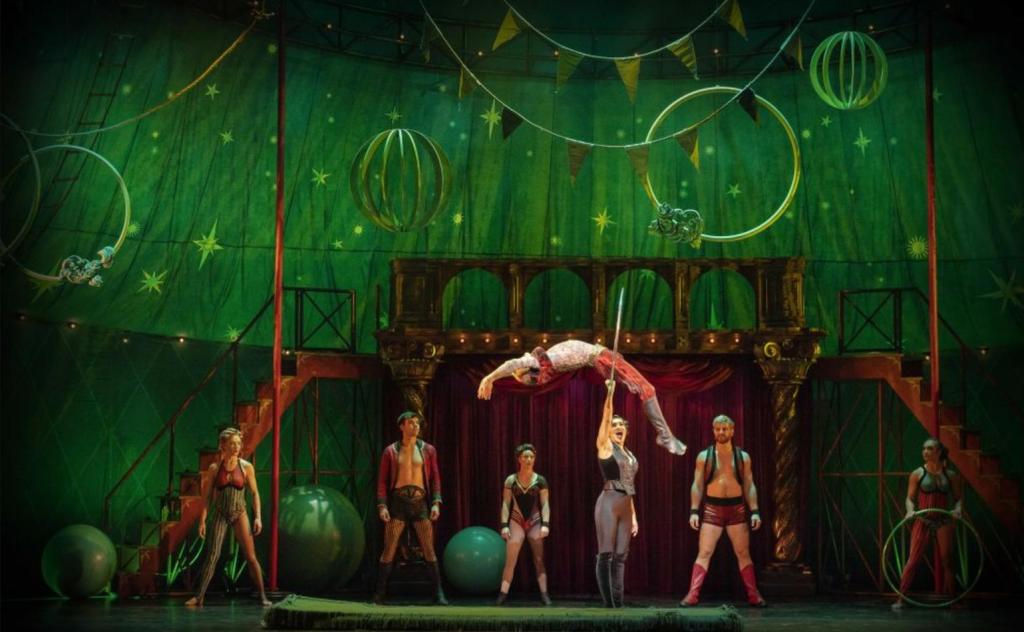 It was an Australian premiere long anticipated, and a return to theatres the arts had been hankering for over eight months. However, this re-entry – while exuberant – also left many feeling uncomfortable.

It first premiered in 1972, drawn from the book written by Roger O. Hirson and with music and lyrics by Stephen Schwartz (Wicked, Godspell). Paulus’ gave the production new life in 2013. And for Sydney it has been co-produced by John Frost and Suzanne Jones.

It is the first big commercial musical out of the post-COVID blocks, and protocols were in place arriving at Lyric Theatre, with guests not permitted to enter the theatre unless registered and wearing a mask.

But it would appear to have been pantomime in itself, because on entering the theatre on opening night, it was jam-packed. This was not some socially distanced experience. It was a totally full theatre, and as soon as the lights went out, the masks came off.

It was a very uncomfortable experience. It was also one that made me angry, given this is the first moment our theatres are open again to live audiences – and that the audience could not even pay respect to those performers (jeopardising their livelihood) by sitting for a couple of hours with a mask on.

Sadly, it has made me rethink returning to further theatre performances just now. It is a shame, because PIPPIN is just the kind of magical celebration and in-theatre experience we need right now.

COVID aside, PIPPIN is a curious choice, not known for its toe-tapping, sing along hits and a storyline that, at best, could be described as lightweight. Maybe we just demand more of our theatre fifty years on?

PIPPIN is caught somewhere between circus act, cabaret, musical, fantasy and philosophic message. It has a surreal twang, and in that, perhaps has a currency with the day.

It is the tale of a naive Pippin, son of a medieval ruler Charlemagne, who returns home on finishing his education, only to face life’s greater education. He seeks fulfilment and meaning, and the audience is passaged through his encounters with Glory (aka war), The Flesh (aka seduction), Revolution, Politics and an Ordinary Life – saccharine chapters that map our moral journey.

It is presented as a show within a show with Schwartz and O Hirson’s original troupe of theatre players reworked as a circus troupe. This is where this production starts to get entertaining.

It has a high-octane tone, where acrobatic and trapeze feats are topped off with bold choreography and many a hoop-jumping spectacular, illusions and balancing acts. The circus elements have been created by Gypsy Snider of the Montreal-based circus company, Les 7 doigts de la main (also known as 7 Fingers).

Choreographer Chet Walker pays an honoured nod to Bob Fosse – all shoulders, angles and splade hands. It has incredible show-biz pizazz, and is delivered with impeccable timing by the ensemble.

Completing the spectacular are technicolour set design by Scott Pask echoing the big top, and costumes by Dominique Lemieux that fused medieval undertones with high circus influences. The production was delicious eye-candy – sensual and seductive.

A highlight was a series of costume changes by Leslie Bell, who plays Pippin’s conniving stepmother Fastrada, that were mind-blowingly seamless and lightening speed – and illusion in itself.

Holding this production together from start to finish was American performer, Gabrielle McClinton in the role of The Leading Player – part Emcee part Ring Master.

Traditionally performed by a man, Paulus cast a woman in the role. McClinton brings a charismatic strength to the role, which is sassy, shiny and impressive – her familiarity with it stretching back to Broadway’s stages.

Ainsley Melham holds the role as Pippin, although his voice took time to warm and strengthen on opening night. He did however build velocity in the role, managing to pit emotions between naivety and frustration, and to indeed empathy in the final scenes.

This was drawn out of him, in particular, by Lucy Maunder in the role of the widow Catherine, who delivers a genuine warmth on stage.

As Berthe, Pippin’s grandmother, TV-presenter Kerri-Anne Kennerley arguably has a presence on stage, with her brash humour and sensual joie de vivre making up for her inability to sing – largely falling into the rhythm of speech in many of her numbers.

Her antics on a trapeze with a burly bloke, however, bought a smile to many.

Simon Burke was seamless and bought much to the role of the ruthless Charlemagne, while Bell as his second wife Fastrada, was jaw-drawing for her dancing.

One annoying aspect was Paulus’ choice to use American accents, which floated in and out without great consistency or conviction. PIPPIN plays on universal, metaphysical themes, and yet such choices only serve to weaken a dramatic performance.

But those are the only glimpses we get of it here; after all these months, as we finally return to musicals, it would have been wonderful to see more of our own hearts in it.

Overall, PIPPIN can only be described as spectacular but strange. The choreography and staging are what make this enjoyable theatre.

It is far from thinking theatre, and feels somewhat outdated, but hey people love it! As the curtain fell on opening night, the audience jumped into standing ovation.