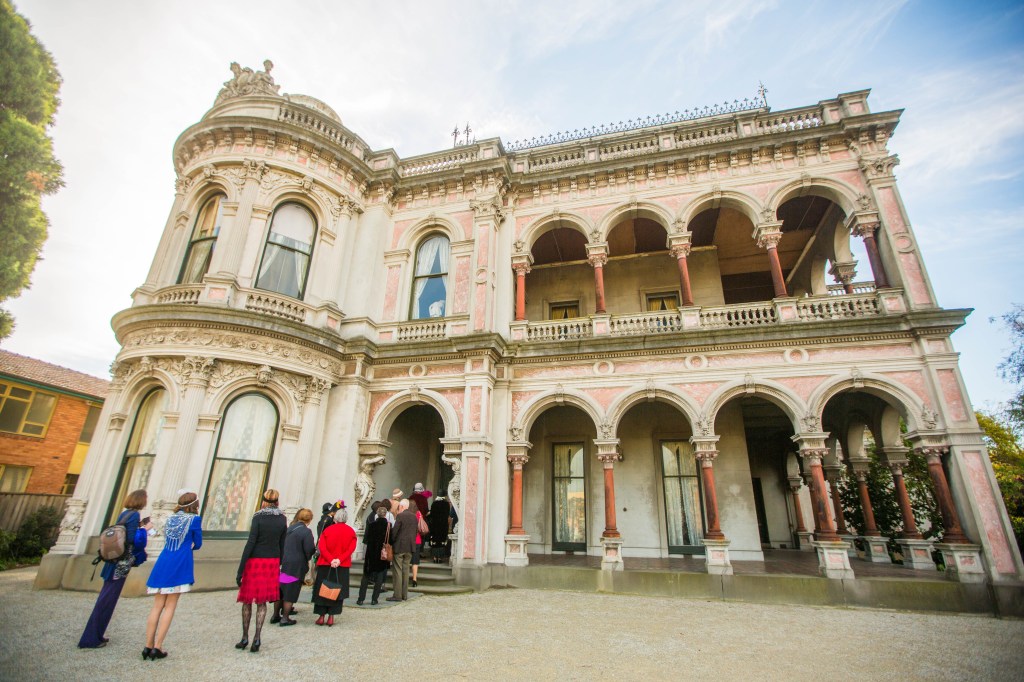 ‘Although it’s not a particularly cerebral event, all in all it’s not a bad way to kill an evening.’ Photo supplied.

Labassa Mansion is secreted away at the end of Manor Grove in beautiful tree-lined Caulfield. Boasting more than 700 residents during its 60-year history, where it morphed from a mansion into flats, Labassa has survived with its Victorian-era decoration intact and is now a National Trust heritage-listed building.

Its opulence alone makes Murder Mystery: Labassa Mansion worth a visit, but the murder mystery shenanigans definitely add a dash of entertainment to the experience.

The evening begins with around 100 participants gathering in the expansive driveway while actors dressed as characters from the late 1800s mingle among the crowd. The striking two-storey mansion – complete with tower – dominates the landscape as the actors chat to guests and assign them pin-on tags with specific roles (‘Mind Reader’, ‘Horse Masseur’, ‘Mayor’ etc.) in one of six different ‘guilds’ – Artists, Entrepreneurs, Equestrians, Politicians, Psychics, and Scientists.

A French detective gathers the throng to deliver an animated and pun-filled account of the situation at hand. The year is 1895 and a prominent citizen, Mr Mel Bourne, is the victim of a murder in his own home. Mr Bourne was poisoned, shot, stabbed and asphyxiated, with some forgery and sabotage thrown in for good measure. The perpetrator is presumed to be his butler, but the participants must spend an hour inside the mansion playing the role of detective in order to find the true killer/s.

Divided into guilds – with their assigned actor/character leading the way – guests are immediately whisked into another era as they cross the colourful tessellated tile entry. The enormous rooms, grand staircase, stained glass windows and soaring ceilings are simply spectacular, even though the property is still undergoing desperately needed restoration works.

There was a sense that some of the actors were not yet familiar enough with the event to make it a seamless experience. The introduction by the leader of the Psychics Guild felt more awkward than helpful, as he struggled to remember the various names of the guilds, which prevented a complete immersion into the storyline. He was lively and personable though, and eventually the mission was clear enough – explore the rooms at your own pace, find clues, and interrogate suspects (the other guild leaders) to uncover the true culprit.

There’s not a whole lot of skill required to solve this mystery, and in fact just inadvertently overhearing other people’s conversations provides nearly all of the evidence you need. There’s some fun to be had along the way – ‘gamble’ with the Entrepreneur, have your Polaroid photo taken by the Artist, debate topics with the Politician, play psychic games, and answer scientific questions.

Reassembling back in the designated guilds for the last 10 minutes, clues are shared with the group before everyone gathers out the front of the mansion where the French detective unveils the truth. There are laughs (if you like cheesy puns), the actors were amusing, the mood was upbeat, and the location was impressive.

Although it’s not a particularly cerebral event, all in all it’s not a bad way to kill an evening.

Murder Mystery: Labassa Mansion has performances on selected Thursday, Friday and Saturday evenings until late May. Sessions run for 1 hour 30 mins, starting from either 6pm-7:30pm or 8:30pm-10pm.
Tickets: $60