A dystopian future reimagined through Shakespeare’s immortal work offers a grim and disturbing world that is all too real.
Suzannah Conway 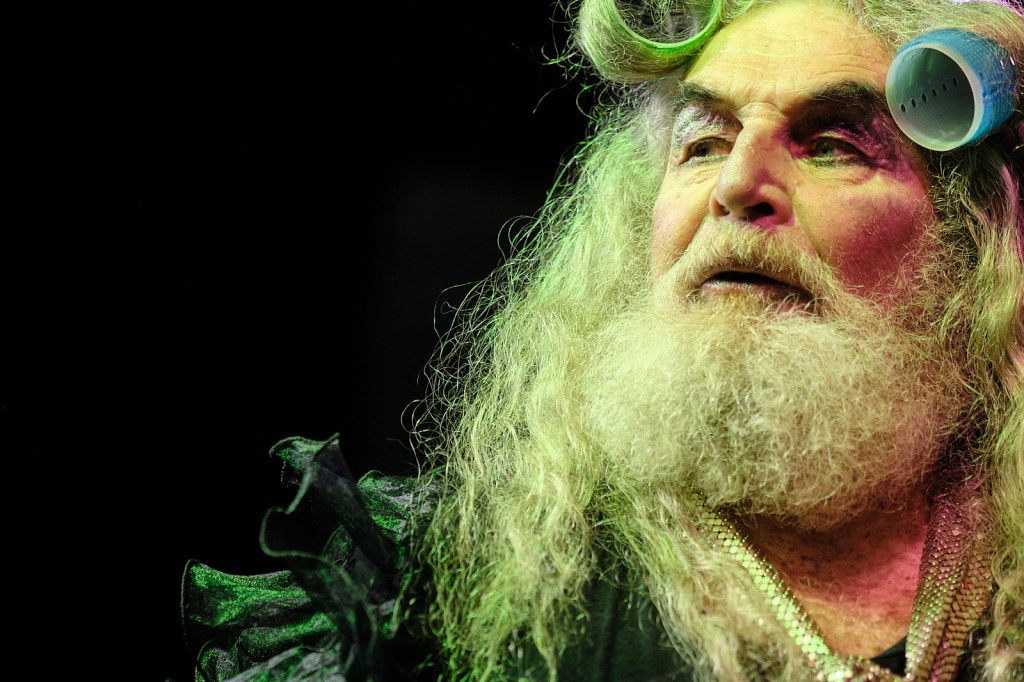 The Curators’ Theatre (TCT) is an independent theatre ensemble that aims to create new and re-imagined work for contemporary audiences, combining text-based theatre with visually dynamic live performance. The company was co-founded by director, producer and writer, Michael Beh and creative designer, composer and musician, Peter Crees in 2017. Most recently they’ve produced Vincent River and The Revolutionists in their new home at the beautiful and heritage-listed Christ Church in inner-city Brisbane.

The company’s first offering for 2022 is described by director and adaptor, Michael Beh, as ‘a radical re-imagining’ of Shakespeare’s King Lear in ‘a dynamic and edgy adaptation … with its gripping descent from hilarity to hell.’ With a far smaller cast than the original, and some artists doubling roles, the plot develops along the play’s familiar lines, mostly faithful to a truncated Shakespeare but with some clever changes and a different ending, the latter resonating well.

The script is cleverly interwoven with appropriate text from other sources, including Dante, Keats, Dickinson, Yeats and Eliot, which in context worked smoothly. Additionally, the actors speak some of their lines in languages specifically utilised to comment on their actions. The Germanic stolidness of Goneril’s character suited her German lines, while the hot-headed Regan spoke Spanish. Cordelia, Lear and Kent use the more flowery language of French, with Gloucester (here portrayed as a Duchess rather than a Duke) speaking in the antiquated tongue of Latin. This created another layer of interest in the characters, ably assisted by having the translated text projected onto a screen.

Michael Beh’s interpretation of the work uses the medieval story of Lear to comment on our current world. The ageing King foolishly divides up his kingdom between the two daughters who flatter him most, Goneril and Regan, while banishing his youngest, Cordelia, who is not as effusive with her praise. This leads to a downward spiral of chaos and destruction. Within his re-defined story, Beh demonstrates the vagaries of two family dynasties, while exploring themes of anarchy and hatred, misogyny and abuse, grief and love, manipulation, lies and even fake news. King Lear Monster Show! gives us a future dystopian world that is as disturbing as it is real, with odd moments of tenderness and even humour. But it is an underlying dark, brutish world that the characters inhabit.

Beh’s direction was briskly paced and the narrative clear, his characters well-developed by actors who were not afraid to take risks and explore the sexual depravity and brutality of human nature. As Lear, Warwick Comber gave a commanding performance. His was not just a foolish old man, but a manipulative, abusive and dominant figure, whose ultimate tragic downfall was unsurprising. As his daughters, Amanda McErlean was a strong and dominant Goneril, her cruelty knowing no bounds, until her downfall in desiring Edmund. Sherri Smith’s Regan was deliciously evil, her witch-like appearance making her a powerful force against her sister. Lauren Roche’s Cordelia started life as a sulky adolescent, far from the usual naive princess, but developed into an empathetic figure.

Edgar’s party boy image was taken to extremes in his drug-induced gay opening scenes, though Cameron Hurry made a believable transition to a caring and responsible adult. His Poor Tom character gave every impression of a world out of control. Fleshed out as an evil and brutish pansexual, his half-brother Edmund had a more difficult task and, while Willem Whitfield spoke the lines well, his lack of experience showed. Greg Scurr’s Kent and, later, his disguised Kanga, were both excellent; the only really decent person in the play. As the Duchess of Gloucester, rather than the Duke, Julia Johnson was splendid, bringing a sense of humour and levity to her character, followed by poignancy after she is blinded.

The Fellini-esque characterisation of The Fool, as played by Eleonora Ginardi, was far removed from the court jester of the Middle Ages. For the most part, her Fool stood back as commentator and observer, controlling the action like a puppet-master. In a range of evening outfits and black leather, hers was a strange otherworldly, androgynous role, speaking as she did at times in all four western European languages. It was an interesting concept which she managed with mixed success.

The staging by Beth Scott was simple but atmospheric – a backdrop of a round moon-like projection screen, with hung clouds and a front of stage rostrum designed as a magic island and used to good effect. Additionally, Ronnie Wakefield’s huge cubist portraits of each of the characters adorned the side walls, like tapestries in a ducal castle. Michael Beh’s Vivienne Westwood-inspired outfits with their op shop grunge alongside recycled evening wear well suited the decadence of this crumbling world. In equal measure, the colourful and foreboding lighting of David Willis matched the evocative soundscape created by Brian Cavanagh, while the strains of a broken-down version of Beethoven’s Fifth Symphony seemed to offer a final degeneration.

TCT is a very welcome addition to the Brisbane theatre scene, at a time when we not only need more provocative, thought-inspiring theatre but also when opportunities for professional creative artists and performers to practise their art are woefully limited. All credit to the team behind this ensemble for bringing to life much-needed text-based work in a visually interesting venue such as Christ Church. It was inspiring to be able to enjoy such intelligent and thought-provoking work and I am looking forward to seeing more of their work in future.

King Lear Monster Show! will be performed until 5 June 2022.