Get your flares and platform boots out because 'Mamma Mia' is back...again...
Reuben Liversidge
[This is archived content and may not display in the originally intended format.] 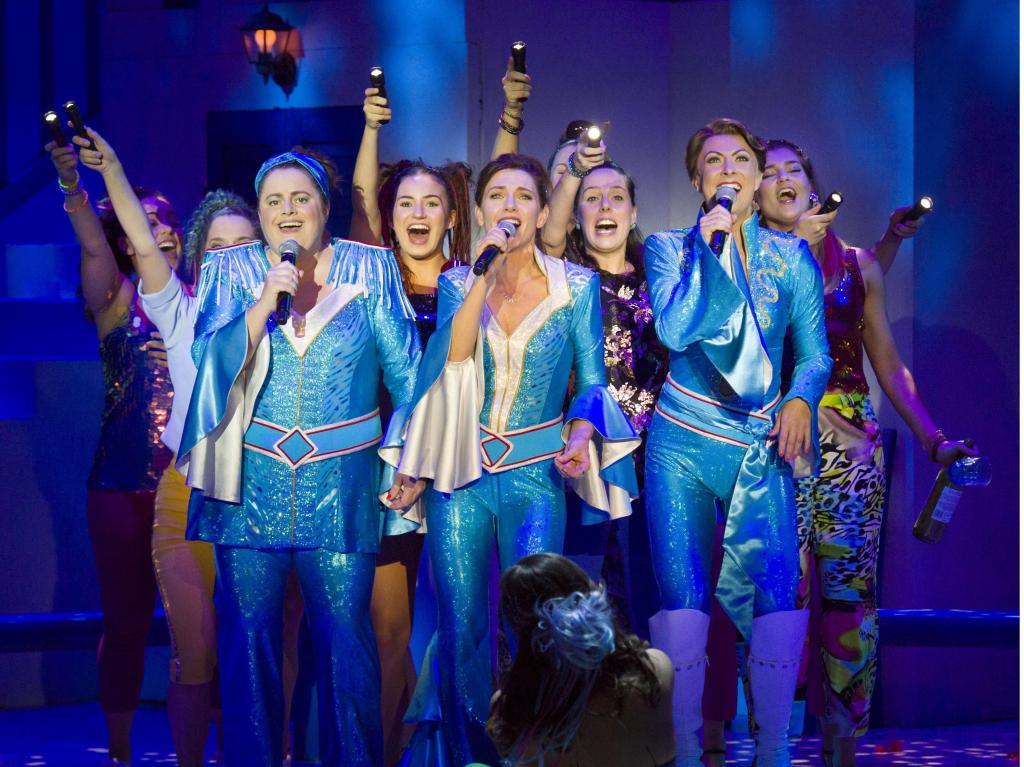 Jukebox musicals can be polarising. Some people love hearing their favourite songs presented in a theatrical setting whilst others can find these types of shows a bit naff. The creative team behind these productions have two choices; tell the true story behind the artist and their songs (Jersey Boys, Beautiful: The Carol King Musical) or create a fictional narrative and fit the existing catalogue of music into the story (We Will Rock You, American Idiot). When they work jukebox musicals can celebrate the life of a popular artist in an interesting and entertaining way or create whole new ways of interpreting and appreciating well known songs. When they don’t work they can be superficial, unimaginative and very hard to sit through.

Mamma Mia was one of the first massively successful jukebox musicals and ushered in a new era of the genre, for better or worse. Premiering in the West End in 1999 the show has gone on to be seen by over 60 million people in more than 450 cities throughout the world. It is the eighth longest running show in West End history and the Broadway production ran for a staggering 14 years. A movie adaptation was released in 2008 starring Meryl Streep as Donna and a sequel hits movie theatres this week. Australian audiences have already seen two touring productions of the show in 2001 and 2010 and now Mamma Mia is back…again.

The paper-thin story conceived by Judy Craymer and written by Catherine Johnson revolves around bride-to-be Sophie (Sarah Morrison) and her quest to find the identity of her biological father before she gets married. Her mother Donna (Natalie O’Donnell) runs a small taverna on a Greek island and after reading her mother’s diary Sophie invites three potential fathers to the wedding; architect Sam (Ian Stenlake), dorky banker Harry (Phillip Lowe) and free-spirited writer Bill (Josef Ber). Donna’s best mates Tanya (Jayde Westaby) and Rosie (Alicia Gardiner) also come along for the ride, providing moral support for the surprised Donna and giving the audience some comic relief. And that’s pretty much it story wise.

Mamma Mia is really an excuse to present ABBA’s greatest hits catalogue live on stage and it certainly does that, but this means that the story becomes basically inconsequential. I really did not care if Sophie found out who her father was (there are no dramatic stakes) and struggled several times to make sense of why these characters were singing these songs. The transitions from book scenes to musical numbers are very clunky; something along the lines of ‘I wish I had more money’ – cue the opening bars of ‘Money, Money, Money.’ Worse still the lyrics haven’t been changed to suit the story and characters, so after presenting Donna as a strong single mother to hear her sing the line ‘If I got me a wealthy man/I wouldn’t have to work at all, I’d fool around and have a ball’ is rather baffling.

Having said that, there’s no denying Mamma Mia does what it sets out to do. Which is to give the audience a laugh and have them dancing in the aisles. This show also has a lot of heart and takes a surprisingly refreshing stance on mother/daughter relationships and the institution of marriage. It’s also great to hear Australian accents and references to local places incorporated into the story; a rarity for an established international musical. It’s pretty hard to be a stick-in-the-mud when there is so much joy and energy spilling off the stage.

All of the leads have settled into their roles throughout the duration of this national tour and their chemistry is authentic and effortless. Sarah Morrison is delightful as Sophie. She radiates such warmth and honesty and her singing is clear and powerful. Since making her stage debut in Ladies in Black a few years ago this young actor is well on her way to becoming an accomplished leading performer on the music theatre scene. Ian Stenlake brings a wealth of charisma and professionalism to the role of Sam and Jayde Westaby is deliciously dry and droll as Tanya. In a clever casting move Natalie O’Donnell now plays Donna after appearing as Sophie in the original Australian tour 17 years ago; talk about coming full circle. O’Donnell captures Donna’s strength and fragility well, however her voice sounded rather tired on opening night. The ensemble seem to be having a ball on stage and several numbers, including ‘Does Your Mother Know’ and ‘Voulez-Vous,’ explode with the energy that only a well-drilled group of performers can provide.

Mamma Mia is an example of the dangers in shoehorning pre-existing songs into a new storyline. An accomplished piece of dramatic narrative theatre it is not. But then again people know what they’re in for when they buy a ticket to this show. So if you’re an ABBA fan and would like nothing more than having a boogie to ‘Dancing Queen’ for the millionth time you’ll love this show. For the theatregoer after a bit more substance to go along with the songs you might want to look elsewhere.