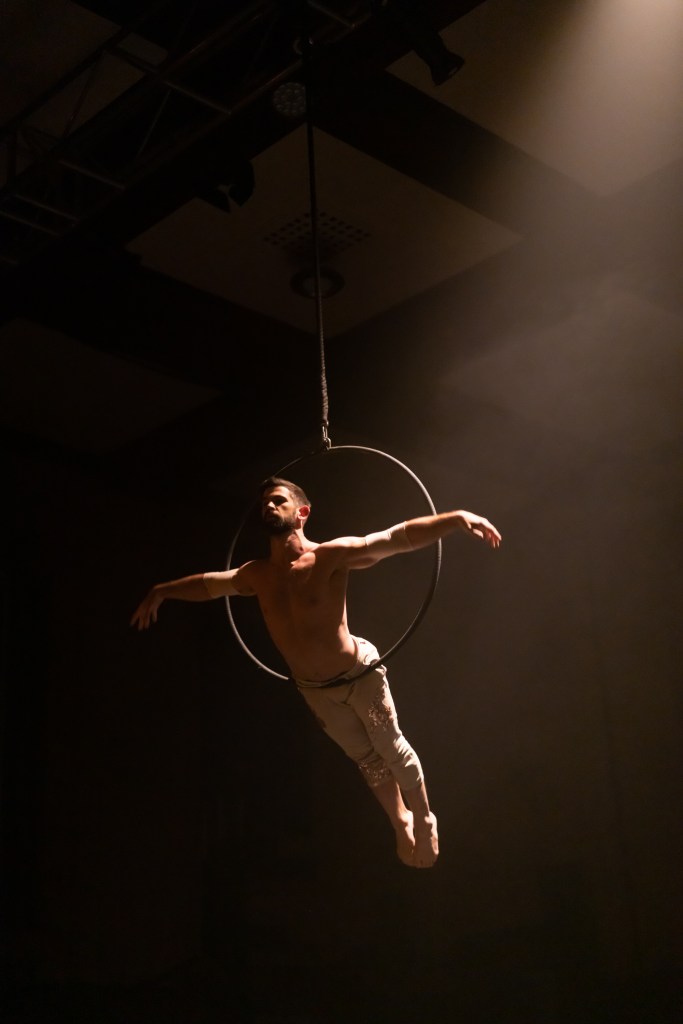 Impressive aerial work from one of the Brief Boys. Picture by Naomi Reed.

The Briefs Boys aired some more dirty laundry in a new and inclusive show. This time, they came on stage as a team of ten, including the new additions of Queen Konga and Dale Woodbridge-Brown. They showcased a wider range of skills and a gamut of masculinity that bends gender stereotypes.

Dirty Laundry was produced and led by the most amazing Fez Faanana who showed off some luxurious dresses and high heels. In the typical style of Briefs Factory, Dirty Laundry was sexy, funny, and political.

Faanana started off with a heartfelt ‘Welcome to Country’ and an acknowledgement of privilege. This was followed by a wet dream featuring an Adonis covered in soap bubbles that were gently wiped off to reveal his naked body. The Briefs Boys know how to combine the serious, the ironic, and the naked.

Throughout the night, there were comments on the hardship that artists are facing and the challenges to secure funding and shows in a world affected by a global pandemic. But the boys’ reflections were made in a light and fun way, with their jokes inviting and receiving laughter. They were clearly grateful for being on stage.

Earlier, they’d offered pen and paper to the patrons with an invitation to air their dirty laundry. Some of these were later read and commented on by Faanana and Queen Konga.

The Briefs Boys presented physical feats among the comedic patter: acrobatics, choreographed dances and burlesque. They mocked gender stereotypes particularly relevant to mainstream culture in Australia, including the suburban couple, the tiger mum, and the schoolies.

The aerial acts were particularly impressive and dramatic. All up, Dirty Laundry was entertaining and raunchy and made for a great night out.