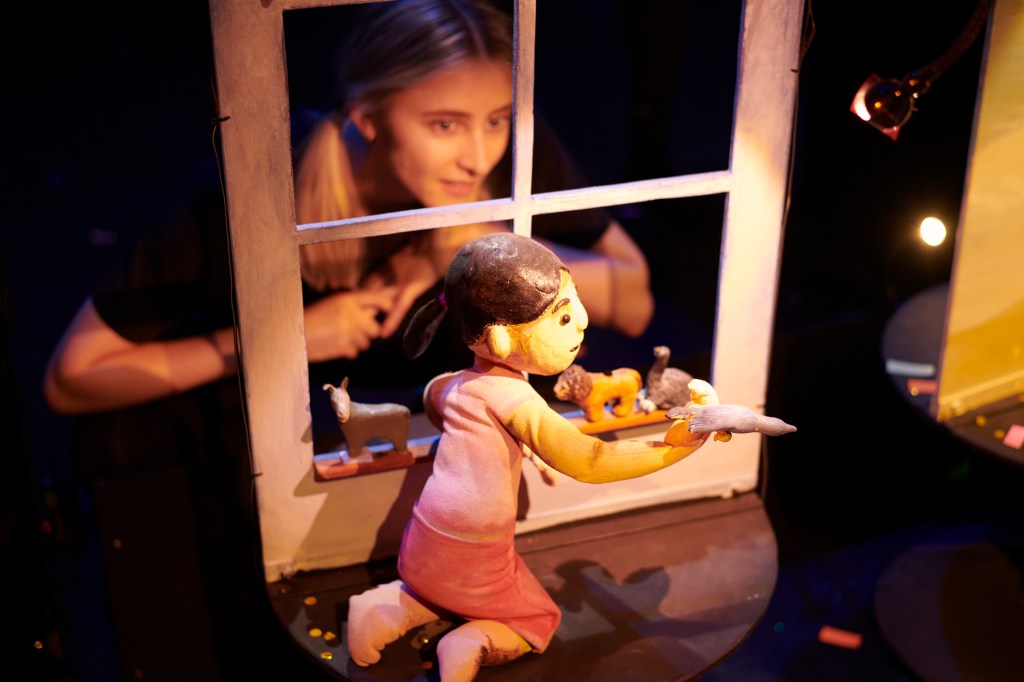 ‘Each video was accompanied by a whimsical and at times sad, voice-over. As the lights went out on each portrait, the subjects of the characters’ imaginations—rendered as animals—entered the stage’. Photo by Kaifu Deng.

A ‘serious’ composer by his own reckoning, Camille Saint-Saëns (1835-1921) did not want audiences to experience his Carnival of the Animals during his lifetime. He feared that its frivolous and comical nature would cast a shadow over his serious oeuvre. For Saint-Saëns, laughter was the beginning of the end of how he imagined himself to be – extremely serious. The work was set free after he died.

The disposition of theatre-goers is not unlike Saint-Saëns’ image of himself. Donning smart and smart casual attire, their seriousness was etched away by the rhythm of Nick Enright’s words at the premiere of this Perth-centric rendition. The joyful physicality of the puppeteers, the sounds of the two pianos, and glimpses into the lives of the people of the city of Perth loosened tight shoulders.

Together with a talented team, director Michael Barlow successfully transported adults and children alike into the imaginations of the city’s residents, brought to life through puppetry. In this adaptation of Carnival of the Animals, the 14 movements of Saint-Saëns’ classic are rendered through 14 still puppets, akin to portraits, each capturing a moment in someone’s life. As each portrait was turned to face the audience by the puppeteers, a video of each character’s day-to-day preoccupations was projected for all to see.

Each video was accompanied by a whimsical and at times sad, voice-over. As the lights went out on each portrait, the subjects of the characters’ imaginations – rendered as animals – entered the stage. They played, caused mischief, and incited laughter from the audience. The atmosphere in the theatre shifted. It became anything but serious as the audience surrendered to the spectacle. Here, the capacity of Enright’s writing to charm the young and old alike is commendable.

Read: Dance review: Death and the Discotheque, The Butterfly Club

This version of Carnival of the Animals is a carnival of human desire. The animals in the show exist merely as the embodiment of human longing. The Lion, for instance, arises out of the imagination of a tired man exiting a train after a long day at work. He wishes he were the king of the jungle so that he may realise his dreams. A child laments piano practice and would rather cause mischief with a friend, like a pair of chimpanzees.

In their own way, each character in the show wishes to escape the seriousness of the everyday of life in Perth. Consequently, one cannot help but feel like a voyeur. Each vignette and glimpse into a character’s life and imagination feels like a sordid imposition. After all, we not only enter people’s yards and homes but their minds. In doing so, we realise the importance of letting others into our worlds and of play and fun – of being un-serious.

Indeed, as the show suggests, this may be the only way to realise our desires. Nonetheless, Carnival of the Animals is not a show for the ‘serious’ theatre-goer. So, to those who see themselves as Saint-Saëns saw himself, best to stay away from this one. And for the un-serious, have a great time.

Carnival of the Animals will be performed until 29 January 2022. 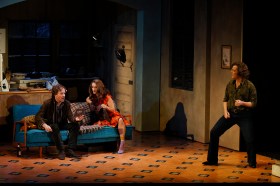 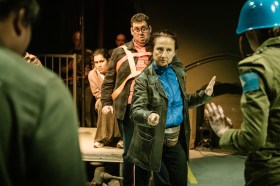