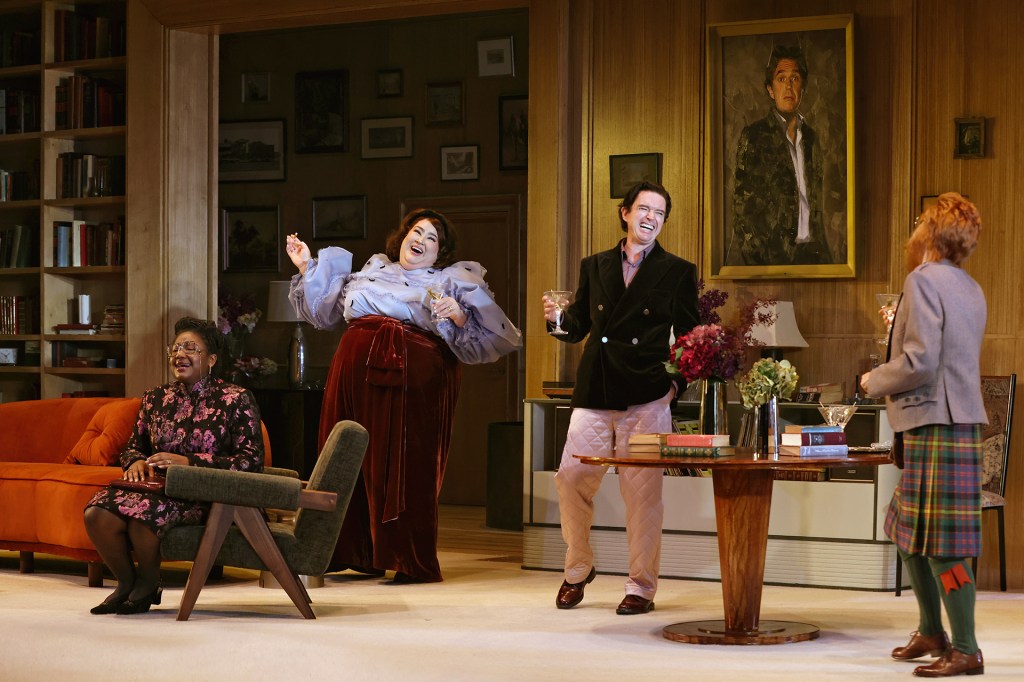 ‘Coward’s snappy dialogue remains as crisp as it was 80-plus years ago.’ Photo: Prudence Upton.

Blithe Spirit, in the competent hands of director Paige Rattray, is an utter camp delight, summoning not just the titular spirit of Elvira, but that of Noël Coward himself. First hitting London’s West End during the summer of 1941, war-rattled Britain was in the mood for a witty, comedic romp. Judging by the Sydney audience’s exuberant reception, the play is just as welcome and necessary in 2022.

Matt Day is Charles Condomine, a widower novelist writing about spiritualism, living in a country home with his second wife Ruth (played by the stellar, show-carrying Bessie Holland). He decides to invite some friends over (Tracy Mann, Nancy Denis), and a clairvoyant for a séance – in the interest of research. Inadvertently, Madame Arcati (Brigid Zengedi), summons the ghost of Charles’ first wife, Elvira (Courtney Act), who is determined to wreak mischief on poor Charles for business unfinished. Madame Arcati, primarily a purveyor of parlour tricks, is ecstatic to find out that during her trance she effectively pierced the veil into the beyond.

There’s a riotous slapstick quality amped to great effect by Courtney Act in the contrivance that she is only visible to Charles and cannot seem to cross back into the afterlife. All the actors are adept at physical comedy, (special shout-out to Megan Wilding as the Maid), but there is also Coward’s snappy dialogue, which remains as crisp as it was 80-plus years ago. One can witness the resonance the play has had over decades of popular culture with identifiable echoes in films such as Beetlejuice and Death Becomes Her. Ruth’s interactions with the (to her) invisible and inaudible Elvira are particularly well-executed.

Rattray accentuates the queerness of Blithe Spirit in casting, and it is a flashy, slick production from designer David Fleischer, wherein themes of mortality are explored with silver-tongued gallows’ humour, creating an extremely enjoyable theatrical experience if you like sharp, clever, dark comedy.

Blithe Spirit will be performed until 14 May 2022