A modern multimedia adaptation of a classic novella.
Heather Blakey 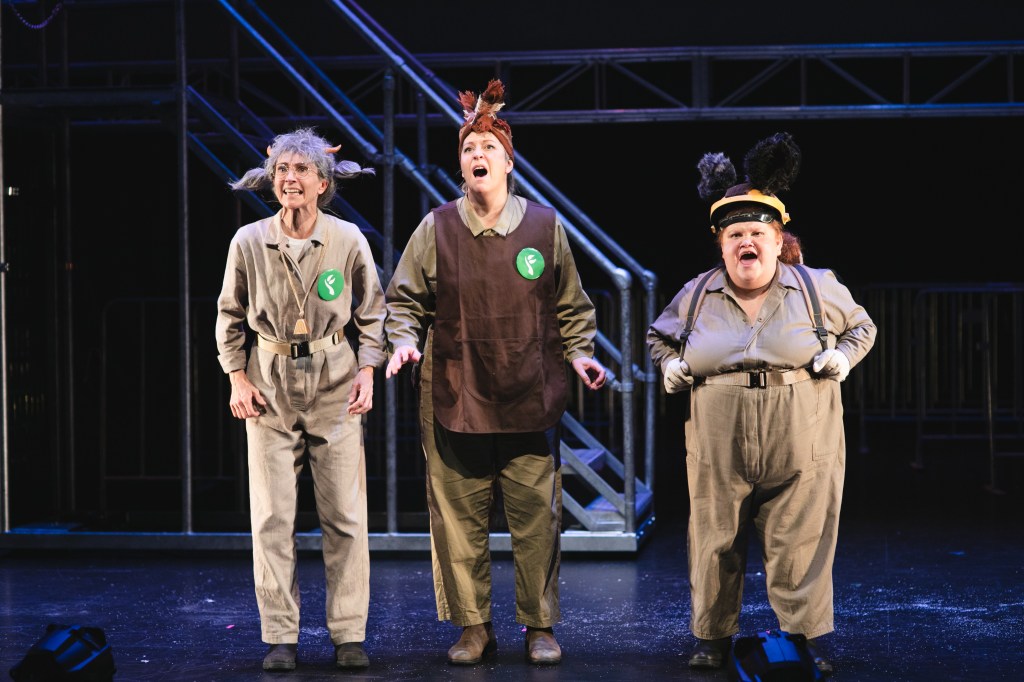 George Orwell’s classic allegory of Stalinist Russia is an examination of propaganda. It asks what – given the right parameters and context of information – we are willing to believe about our communities and our neighbours. It feels hackneyed to say it’s ‘more relevant than ever’ but Orwell’s story continues to be topical. Its original title (Animal Farm: A Fairy Story) also alludes to the fact that despite grounding his commentary deeply in the experiences of his lifetime, Orwell also had a clear sense that what the book had to say would transcend the boundaries of his particular time and space.

So arrives Van Badham’s modern theatrical adaption of Animal Farm – and it arrives with a bang. If one were to enter the play concerned that any form of literary exclusivity might have found its way into this retelling, Badham and director Emily McLean quickly shake any doubts away. The audience is immediately flooded with an energetically crafted news cycle on the ‘animal revolution’ and the rise of Animalism.

It’s a kaleidoscope of media on-screen: a mix of film clips, short internet video, reportage and interview, all performed by the cast of Andrea Gibbs, Megan Wilding and Alison van Reeken. It toys with contemporary news tropes that are familiar and thus teasing. Animal Farm is about darker natures, but this clever opening act had the crowd heaving with laughter and leaning forward with anticipation, aware that the next 100 minutes were going to be different. The kaleidoscope ends and Old Major (played by Gibbs) appears stoically on stage, and from that point, the onstage and onscreen worlds of Animal Farm collide.

Badham’s adaption makes use of some of the more ludicrous visuals that arise from Animal Farm – things that are undoubtedly funny in the oddball and cartoonish visuals they conjure when removed from the seriousness of the novella and placed into the realm of live performance. The humour, however, is never completely unchecked and never undermines the play’s more thoughtful considerations. The audience laughs (and you will laugh too – the brilliant performances of Gibbs, Wilding and van Reeken will make sure of it) but it’s always in balance.

When Wilding appears as a ‘Duck Engineer’ in tears for an interview about a local disaster, the costume is undoubtedly hilarious (and Wilding lands perfectly the complex mix of humour and tragedy throughout the play). But the regular shifting between witnessing animal characters in real-time on stage and witnessing them as displaced figures on a screen highlights just how much easier it is to laugh at and feel disconnected from the intangible experiences of television (or YouTube, or TikTok) disasters. Originally intended to be performed before the 2020 US election, the allusions to Trump and his rhetoric are here, but they are not overbearing or oversimplified – and in this way are made insidious, staying true to the pacing of Orwell’s original text.

All the performers are superb. At times it’s almost easy to forget that there are only three – Gibbs, Wilding and van Reeken all shift so seamlessly between their roles, with brilliant changes in movement, voice, and delivery. Part of the pleasure of this adaption is being immersed in the skill and craft possessed by this exceptional group and marvelling at their quick flexibility in drawing the audience to new characters in an instant. A word here must also be given to the sound design. It is just as sharp as the rest of the play, sounding throughout the theatre and placing the audience within the ‘crowd’ of animals – particularly during the more hyperbolic speeches of Napoleon and Old Major.

There are moments when the energy of the play slows down, particularly during monologues from Clover, Muriel and Benjamin concerning the creeping and sometimes violent political shifts on the farm. These observational monologues condense some of the more shocking aspects of the original story. They also draw a more direct line to the contemporary surveillance culture that’s so prevalent in our screen-driven society. Clover watches the farm rewoven into a place she doesn’t recognise. The audience watches Clover’s pain, and the screens always return to shape everything into a clever and digestible soundbite.

This is a performance that expands, plays with, and explores many of the more universal observations of Orwell’s classic work, and it does so with an incredibly inventive mix of techniques. Contemporary humour and language, new communications technology, and three highly skilled performers playing a cast of many. It examines the way public and private communication in societies have and have not changed. Like Orwell’s original work it is rich with detail that will benefit from a second viewing.

Animal Farm will be performed until 24 October 2021

Heather Blakey is a PhD candidate at the University of Western Australia, researching affect and aesthetics in video games and digital communication. She is a strategic communications professional specialising in the publishing and writing industry, and has worked for academic and commercial brands in Australia and the UK. Twitter: @hmblakey