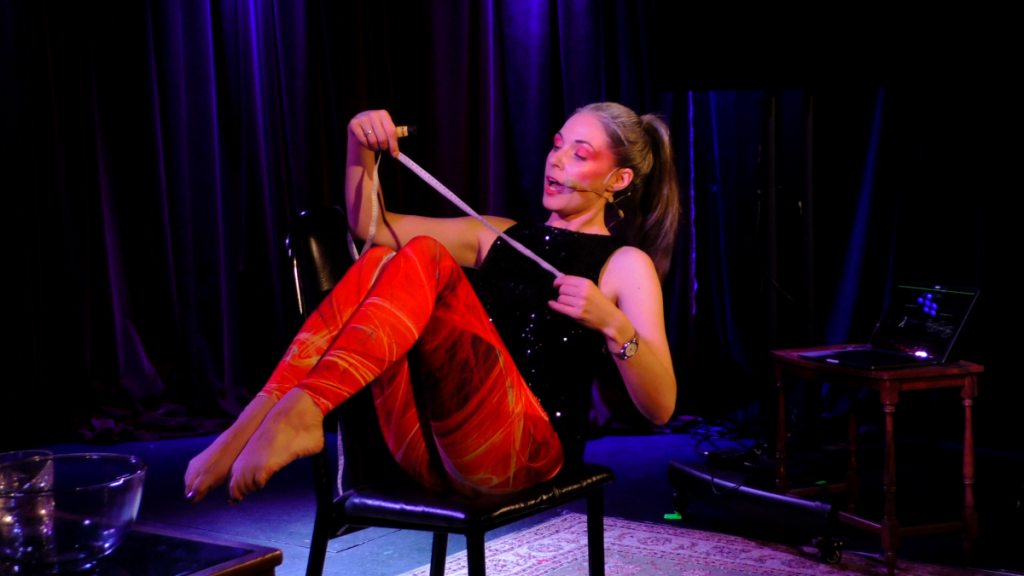 It was the concept that drew me in. A science show by an acclaimed science communicator, the woman who just won the Science prize at Adelaide Fringe Festival, and who balances her work as a performer with a CSIRO day job. The reviews were promising – solid four stars from a range of publications – with a delightful quote from an audience member describing Rachel Rayner as ‘the Nigella of science’. Who wouldn’t want to see a science show that makes people laugh at the same time as teaching them about particle physics?

And then there was the poster :A sequin-clad Rayner smiling disarmingly at the camera with an image of the solar system blazing behind her. She’s a true Renaissance woman – a physicist, comedian, poet, teacher – who’s on a mission to demystify the fastest thing in the universe: light. (Or, as I now know as a result of going to see this show, the fastest thing in a vacuum in the universe). The show was all about light waves, ‘shining a light on light’, and the place of the wonderful photon in the electromagnetic spectrum.

There were moments of engaging verve. Rayner used her body to demonstrate the relative length of light waves, stretching out across the floor for a radio wave and contracting into a tiny ball for gamma rays. She was a vibrant stage presence who cracked Dad jokes, chatted to the audience, and occasionally recited beautiful poetry.

A screen was used to show dazzling images of the galaxy, photographed using cameras operating with different parts of the light spectrum, and a nifty explainer – using images of small and large dogs – to illustrate the differences between high and low energy waves. As someone who slept through high school physics, and has only fitfully engaged with science writing since then, much of this content was interesting for me.

A Flying Photon was staged in a theatre space behind Studio Amsterdam, a multi-media arts space and gallery established by an entrepreneurial pair of artists from the Netherlands, who recently moved to regional NSW. The production was brought to Maitland by Uncapital Productions, the brainchild of emerging producer Chloe Warren, whose vision is to bring national acts to regional Australia, and to share promising regional artists with larger audiences. The show was performed on a Sunday night, traditionally a hard time of the week to get an audience whipped up – particularly in a country town – and at times it felt as if Rayner was struggling to get the plane off the tarmac.

The Renaissance woman concept underpinning A Flying Photon is compelling. Rayner is clearly a very bright person with a gift for language, communication and creative thinking. Given the often stultifying culture of academic institutions, it’s a miracle that she’s had the chutzpah to develop this show. If you consider the way the arts and sciences are often presented as oppositional pursuits, it’s remarkable that any artist will engage with science, and vice versa, let alone attempt to combine the two. But as Claire Corbett recently wrote in her recent Friday essay for The Conversation, ‘Empathy or Division: the science and politics of storytelling’, it was not so long ago that science poetry was a thing.

A Flying Photon featured engaging material and presented a thoughtful approach to complex topics. At times it felt as if the show needed a stronger narrative arc – the pieces of interesting information were sometimes disconnected from each other – and at times it needed to go deeper in terms of its analysis. For example, the images of the galaxy were spectacular but tended to float as beautiful exemplars of the mysteries of the universe.

What was truly impressive about Rachel Rayner was the breadth of her vision. This is a show that sought to integrate science, storytelling, comedy, poetry and physical theatre. It was not always successful, but its creative vision was breath-taking.