The final effect of Henderson’s play as presented by CfAT and the associated companies is cathartic.
Glyn Davies
[This is archived content and may not display in the originally intended format.] 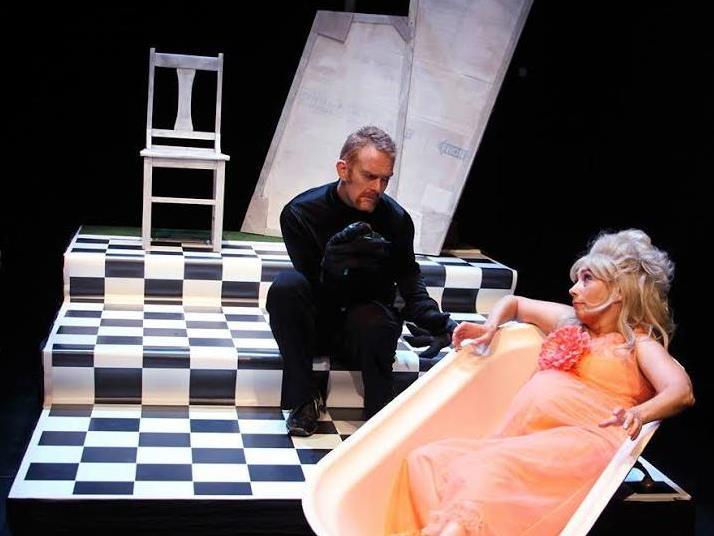 Piers Freeman as Slade and Zelda Grimshaw as Lily.

What is an audience meant to make of a play like this? It is so varied in its modes of presentation, so rich in allusion, so perplexing in its plot, and the playwright’s intentions are so intriguing that there is nothing to do in the end but give in to its idiosyncrasies and just enjoy the spectacle as it unfolds. Graham Henderson is not an easy playwright to deal with from either an audience or a production viewpoint. The Centre for Australasian Theatre is to be congratulated for having made such a handsome job of bringing this play to life without shirking its indubitable sticking points with respect to psychology and sexuality. Lesser companies might have been tempted to tone them down for a provincial audience. That would have been a grave mistake.

The Second Scream is a dream play, a fact which is announced to the audience immediately the set is revealed; it has three acting areas ─ two bedrooms and a bathroom, none of which is at all realistic. The first bedroom (Slade’s) at stage left is quite bare with nothing more than a desk, bed and bed-box, table and chair – and a picture frame through which Slade can look into Dora’s bedroom (at centre stage). The most striking feature of the room is its skewed appearance – walls, door and bed all have a distorted rhomboid shape. The distortion is reinforced when the two major antagonists (Slade and Rainer) appear, the one addressed as Guillaume, the other in drag and addressed as Murillo; to cap it off, both are wearing Pinocchio noses. So, how much of their dialogue can be taken as the truth?  Not much, especially once the ‘pinning’ begins – a kind of temporary murder. Slade, played by Piers Freeman, is a strong, well-controlled figure. His self-confidence does appear to quiver late in the piece, when he looks to be on the verge of hanging himself in the bathroom, but that is merely a ruse, as we learn later. Rainer (played by mOzach – a stage name if ever there was one) is a fantastic villain, and I use the adjective advisedly. It is clear he is a rival for the attentions of the adorable Dora, and will stoop to any trick to gain them, even donning the head of a donkey (an arse?) to make love to her. Played forcefully by Trish Molloy, Dora is at first a doll-like figure, perhaps a blow-up doll, slumped on her bed, legs spread-eagled, but quickly she is seen to have power over others – a femme fatale in the best film noir tradition. Trish Molloy has a deep resonant voice to go with the character and has a good line in sarcasm to boot. Her preference for Slade over Rainer puts her in immediate conflict with Lily, her blonde counterpart, but more of that later.

At the heart of this play is its use of allusion and, in particular, its channeling of the classic film noir, The Maltese Falcon. Readers well-versed in film will recall Humphrey Bogart in the role of Sam Spade and the inimitable Peter Lorre as the snide and slimy gangster, Joel Cairo, engaged in a search for the eponymous statuette. In The Second Scream, the object of desire is once again a distortion of the original – a potato rather than a statuette containing fabulous jewels. Joel, too, has his counterpart in this play ─ in the form of Scabmouth, not a human character so much as a ventriloquial doll, though still given to some unsavoury sexual behaviours more frequently found among real persons. Much is made of the fact that Scabmouth has been emasculated, and indeed, his cojones are frequently tossed about the stage with gay abandon. (Yes, the play is not without its moments of humour.)

The role of Scabmouth is superbly played by Catherine Hassall with precisely the right fear-inducing intonations and the staccato movements typical of a robotic dummy. She is comic and menacing all at once, a fascinating performer. Equally comic at times, and pitiable at others, is the remaining female cast member, Zelda Grimshaw in the role of Lily. She and Dora are rivals for Slade’s attentions, but Lily is the weaker of the two and so she loses most of the battles – though not the war. Intriguingly, she triumphs at play’s end with the assistance of the much sought-after potato and its precious cargo. To say more would be to give the plot away. Zelda’s performance in the role is compelling; she looks fragile, and she speaks with an impediment that makes her, Ita Buttrose-like, all the more interesting. But she is clever and conniving, a fitting companion for Slade.

The one remaining character, Fleischman (Willem Brugman) is a grotesque, a toothless, legless octogenarian with the sexual appetite of a satyr. He seems ubiquitous, first appearing stark naked inside Dora’s wardrobe where he has been spying on her and finally, in an agonising priapic position in Slade’s bed. Brugman has the old rogue’s leers, winks and whines off to perfection. His interpretation of this nasty dream figure is arguably the most memorable feature of the production.

I say ‘arguably’ because there is so much else to admire – for instance, the costumes, which range from the elaborate to the non-existent; they are totally in keeping with the bizarre nature of the play. (Actually the word ‘surreal’ comes to mind here, and it could equally well apply to the set and the lighting plot.) Similarly, one remembers well the musical accompaniment to the action, either electronically menacing or reprising the jazz sounds of the 30s.

Finally, we come to the tasteful manner in which the company managed to present the many fears, rivalries, sexual aberrations, and psychoses of the characters. The company advertises an MA 15+ rating, so the opening night audience had been warned, but when it came to the point, nothing that was shown was at all offensive. It may have been momentarily shocking, but mostly it was comic. The resulting laughter may have been the laughter of embarrassment sometimes, but for the most part it was genuine slapstick-induced belly laughter. In keeping with the ancient Greek tradition, the final effect of Henderson’s play as presented by CfAT and the associated companies is cathartic. The unmentionables and the taboos have been exposed and shown to be merely human characteristics, after all. And isn’t that what theatre is supposed to do?