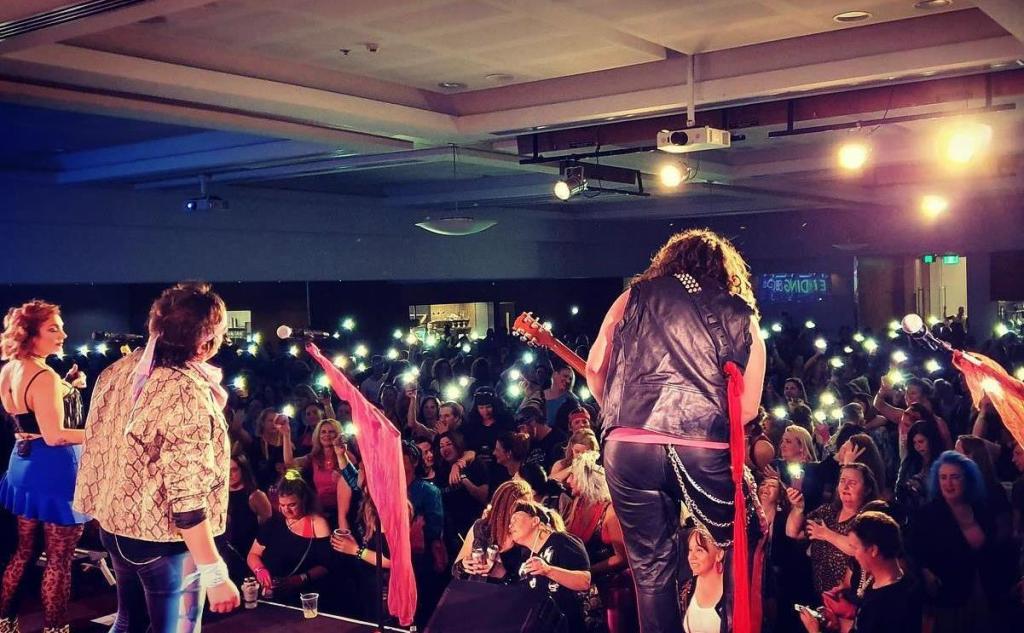 The enduring power of nostalgia experienced as a sound and music phenomenon can never be underestimated. Indeed, it is resoundingly embraced by an extremely talented Sydney-based cover band called Never Ending 80s.

The band’s motto ‘We’ll have you partying like it’s 1989!’ might seem like an empty slogan but this statement is fulfilled to the very letter and spirit by the sheer joyousness of this band’s performing style that involves virtuosic music and a great deal of theatrical prowess. Channelling all things 80s — big hair, exaggerated make-up, extravagant colours, inordinate ripped jeans and tights, and iconic pink Ray-Ban sunglasses — the band really knows how to wow a crowd.

Performers Dani Wilde (vocals), JC Hollywood (vocals), Pete Voltage (Bass), Adz Arcadium (guitars) and Davey Rocket (drums) are all exceptional musicians in their own right. Their technical expertise combined with a generous gusto provided the Bathurst community with a much-needed life-affirming experience in light of the region’s heart-breaking drought conditions.

The venue, Bathurst’s Panthers Club, is a regional offshoot of a professional Australian Rugby League Club that was founded in the Western Sydney suburb of Penrith in 1967. The club’s sporting identity and poker machines might prompt one to underestimate the value of musical performances enacted in this setting.

But on a late October Saturday night, the club hosted an important musical experience that brought together farmers, shop owners, Charles Sturt University students and many more locals – who had raided every supermarket and discount store party section in anticipation. The punters were decked out in items that typified the age of excess: fingerless gloves, fishnet stockings, leg warmers, hair gel, Madonna-style pearls, and all things fluorescent. The occasion also inspired many to tizz up their hair and adorn themselves in colourful outfits and costumes, paying homage to stars of the era.

The music and theatrics exceeded audience expectations and even sometimes the boundaries of the stage itself when enthusiastic ‘ragers’ spilled over it. The music and dancing created an electrifying and ecstatic experience. At one moment during the Madonna song Material Girl it felt as though the band and the crowd became one mass exultant entity.

One standout band member was bass guitarist Pete Voltage who made some hilariously unforgettable Spinal Tap moves. His fantastic sense of humour resonated with the crowd as his phallic bass guitar gestures really spoke to the audience and to a scene that was all about having fun, letting go, embracing the past, as well as fully inhabiting the present.

Cleverly, too, the band set up a decade competition between 1980s versus 1990s in which they repeatedly asked the crowd throughout the course of the night which era produced the best music. Every time, the vote was resoundingly the 80s (although the 90s did get a lot of cheers).

The huge popularity of such songs as A-ha’s Take On Me, INXS’s New Sensation and Prince’s 1999 certainly exemplified a charming optimism often associated with 80s comedies, especially Madonna’s breakout movie, Desperately Seeking Susan (1985). Despite the overwhelming 80s vote, the 90s cannot be dismissed. In fact, many 90s pop songs evoke a haunting, even existential mood. This was brilliantly captured when the Never Ending 80s played Nirvana’s Smells Like Teen Spirit (1991) for their encore. At this moment one was reminded of how the world seemed a little darker in the 90s, especially in light of Kurt Cobain’s tragic suicide in 1994.

Now in a socially mediated online age in which one has unlimited access to music, bands like the Never Ending 80s take us back to the future reminding us that part of the joy of music is about appreciating it as a live and collective experience.

The extremely festive nature of the occasion enabled Bathurst’s regional community to bask in the glow of joyful music and movement. The event especially meant something to local farmers and townspeople who are all suffering from the dire effects of a global warming induced drought. This talented, energetic and life-affirming band is not to be missed.