The Dummies Guide to Opera 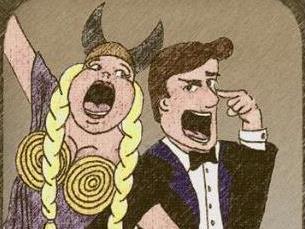 A sell-out crowd in Casa Mondo has the audience seated along thin wooden benches, squashed together knee-to-knee. The fans distributed at the door keep a small amount of air movement in the heavy tent, but the intimate space does not deter the performers.

A whiteboard on stage provides visible structure, a list of composers’ names down the left of the grid, cryptic notations across the top. The show aims not only to take the audience through the various periods of operatic music, to present an introduction to the Fach main and sub-divisions, to perform snippets of music to illustrate the points being made, to provide synopses for the works that provide the musical samples, to translate technical jargon into accessible terms, to present the etiquette for attending performances, to discuss the lives and times of the various key composers in the genre. It also strives to rank each composer against the rest using a cunning formula: number of operas composed minus age at death – with plus points for interesting death and / or illness anecdotes – minus the number of patrons and minus any oratorios, operettas and other ‘inferior works’ composed. Oh, and while packing all this into 55 minutes, the group aim to keep the crammed audience engaged and entertained.

While it is unlikely that many of the ‘Dummies’ in the audience will pass any spot-quizzes after the show, the performance certainly de-mystifies the art form. The four opera singers – the classic soprano, alto, tenor and baritone line up – bring the egos and volatile emotive personalities of the stereotypes to life. Perry Joyce prances, pouts and preens his tenor to perfection, and Charlie D. Barkle maintains the resentment levels at a low, constant simmer. Grace Edwards performs with a delightful twinkle in her eye, and Erin Hutchinson takes the stage as her own. Appealing as the acting is, it is the quality of the voices that ensures the whole performance comes together, and each solo act – demonstrating the nature of the Fächer – is gorgeously done. While the group performs the ‘Hallelujah Chorus’ in a rousing fashion, it is not until the closing stages of the show, and ‘Nessun Dorma’, that the full beauty of the interplay of all four voices is revealed.

Timothy How on the keyboard struggles to keep technical hiccups from disrupting the show, but rejoices in some of the best quips and in the liberty of being able to respond to some of the adlibbing by other cast members, as well as showing off his impressive musical ability and knowledge.

Fringe World brings many different types of shows to Perth, and The Dummies Guide to Opera deserves its packed audience of enquiring minds, love of music and sense of humour.

The Dummies Guide to Opera