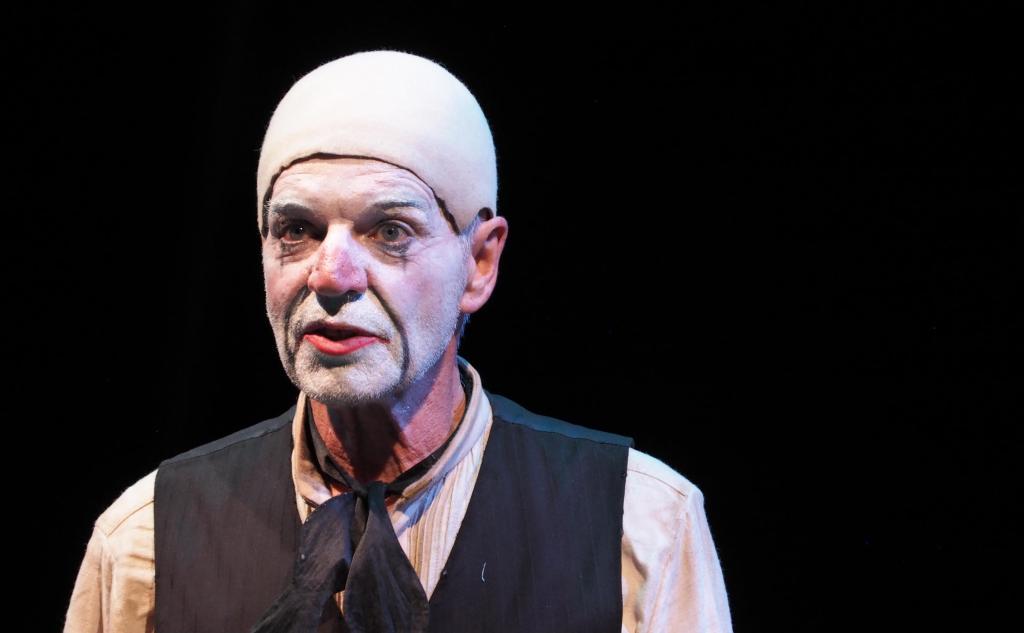 Suitably tucked away in a backstage bolthole of HOTA’s amphitheatre, one enters a tiny makeshift black box theatre, complete with tent poles and rigging. We may well have stumbled backstage of a touring circus.

With no fanfare, a tired old clown, played magnificently by Colin Friels, has joined us, clearly exhausted by both tonight’s ‘show’ and, as it turns out, life in general. Scaramouche Jones has just finished his final show.

Addressing the audience directly as his ‘ghosts’, he proceeds to divulge his life story in intimate detail, and for the next 90 or so minutes we are witness to this final confession, an oral journal entry that is completely mesmerising.

Set late evening, December 31, 1999 – ‘the last gasp of the 20th century’, he tells us straight up he plans to die at midnight, exactly a century on from his ignominious fish shop birth in Trinidad.

An early orphan, his only inheritance was an unknown English father, and his milky white skin – an asset that propels him from adventure to adventure – and this is the story he shares.

Friels doesn’t so much play Scaramouche, as inhabit him, in this multi award-winning one-man play – originally starring the late Pete Postlethwaite in 2001.

Note to budding actors: do not try this at home. As they say when the surf gets big, ‘for experienced surfers only’: Scaramouche Jones is a complex vehicle for experienced actors only, and would be genuinely appalling in the wrong hands – and it’s genuinely marvellous in the right ones.

The tales, the language, the intensely recreated scenes, come thick and fast, and trying to remember them as the roll over you is pointless. The language is as rich as a Christmas plum pud – and just as fruity.

Friels adapts to the many accents of his slave owners, seducers, and rescuers, quoting them with delicious adaptability. One hears each character speaking through him, and each scene is depicted as vividly as if it was playing on a screen in front of you.

Jones is, after all, alone preparing for his death – and I guess that may be the point. Does a life rich in adventure and incident all comes to naught if, in the end, you die alone?

Why, we ask ourselves, did he not marry someone else besides the prepubescent child bride he was once offered. Did no one love this man all these years? This sadness, this sense of loss tinges each of his life chapters, his ‘faces’ as Jones call them.

Most moving was Friels/Jones’ beautiful re-enactment of a mime he performed for doomed children in a Nazi concentration camp. He simply wanted to make them laugh.

Post-script: As an afterthought, this reviewer would also love to see Friels’ wife, Judy Davis, also play Scaramouche Jones – and to be a fly on the wall in the Friels/Davis household when these lines were being learnt.