The acclaimed, much-awaited, sold-out production of Handel’s Saul was the opening night highlight of the 2017 Adelaide Festival.
David Finch 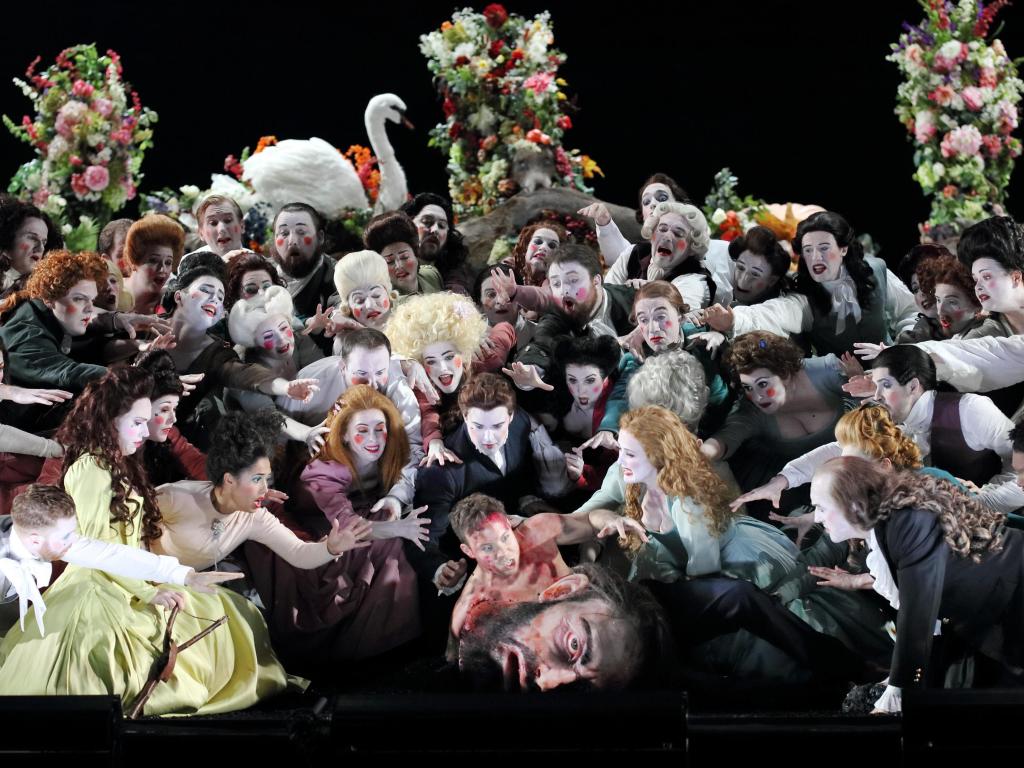 The story of Saul focuses on the biblical story of Saul, the first king of Israel and his relationship with his successor, David, the young warrior who has slain the giant Philistine Goliath, much to the delight of the Israelites. Saul’s initial admiration for David turns to envy and hatred when Saul becomes jealous of David’s popularity. Saul orders his son Jonathan to kill David, but Jonathan’s strong love for David prevents this from occurring. Saul’s jealousy – and ensuing madness  ultimately leads to his downfall.

Because Kosky set the 1739, three-act Old Testament dramatic oratorio in Handel’s time Costume and Set Designer Katrin Lea Tag has dressed the cast in the pomp and finery of the early Georgian age, with wigs and elaborate frocks, yet David (American counter tenor Christopher Lowrey) is, unaccountably, mostly dressed in a shabby suit, and spends much of time looking like an insecure and confused accountant who took a wrong turn coming back from lunch and can’t find his way back to the accounts department.  Lowrey has a fine voice but his acting was wooden and his characterisation (presuming there was one) gave no indication as to why Jonathan or Michal could possibly love him. Christopher Purves, the only performer to reprise their role from Glyndebourne, is magnificent as Saul. He has a fine baritone voice and is a captivating vocal actor. Mary Bevan and Taryn Fiebig were also excellent as Saul’s contrasting daughters Merab and Michal.  Adrian Strooper performed well as Jonathan, but on occasion could not compete with the orchestra when in the lower register.

Tenor Stuart Jackson displaying his fine voice, excellent diction and theatricality played four roles. If you were unfamiliar with the libretto you would think he was only playing two roles because, apart from when playing the Amalekite little effort was made to differentiate these different roles. Similarly, when Saul seeks advice from the Witch of Endor at the beginning of Act 3 he is meant to be in disguise but this was not made obvious through the direction or costume.

Katrin Lea Tag’s set was striking; the deep, dark layer of black rubber crumb that covers the raked stage, accentuated the bright costumes, flowers and feast on the one large white table that stretches across the expanse of the stage during a high-energy opening to Act 1. The chorus and accompanying dancers regularly whooped loudly throughout this feast celebrated the slaying of Goliath. This enthusiastic departure from the libretto suited the plot, but later the camp, fun dancing was at odds with the sombre plot developments – seemed unnecessary and base. Another base note was struck when, in the Witch scene in Act 3, Saul suckles from the pendulous teats of the witch and then spews her breast milk onto the stage. This invention by Kosky is unnecessary and vulgar, as is the childish one-fingered salute from the corpse chorus during the ‘Dead March’.

Surtitles were displayed for this performance, despite the text being sung in English. Unfortunately, on several occasions during the first Act the phrase displayed did not match the phrase being sung.  Also, twice in the Witch scene, Christopher Purves and the surtitles did not match; in Act 3 Scene 1 ‘seek’ was replaced by ‘ask’ and in Scene 3 ‘hour’ for ‘day’.  Attention to detail matters, if not, why bother having the surtitles?

The superb Adelaide Symphony Orchestra was expertly led by the talented and expressive Erin Helyard, an impressive harpsichordist soloist and impresario in his own right; he is the co-founder of both the celebrated Pinchgut Opera and the Orchestra of the Antipodes.

Bigger, bolder, brasher, bawdier, Barrie-er isn’t always better; make no mistake – this production is very good, but that is mainly due to the quality of the singers, musicians, composer, conductor and costumes.