NEWTOWN THEATRE: It’s a rainy day in the suburb of Flaming Tree Grove. Ray arrives home to his anxious wife, Sylvie, and plays the answering machine. The messages are identical to yesterday’s, and every other day’s since their daughter, Ruby Moon, never returned from visiting her grandmother at the end of the cul-de-sac. The final message is cut short as the speaker, Ruby’s grandmother, collapses
Lawrence Bull
[This is archived content and may not display in the originally intended format.] 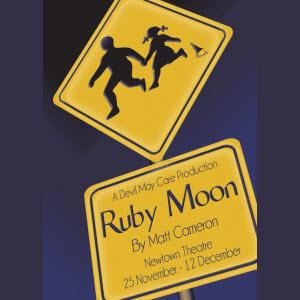 It’s a rainy day in the suburb of Flaming Tree Grove. Ray arrives home to his anxious wife, Sylvie, and plays the answering machine. The messages are identical to yesterday’s, and every other day’s since their daughter, Ruby Moon, never returned from visiting her grandmother at the end of the cul-de-sac. The final message is cut short as the speaker, Ruby’s grandmother, collapses and dies.

The ‘grief tourists’ are no longer outside; the police and media don’t call anymore; the neighbours’ consolation visits have stopped. All that remains are the recorded messages and the mannequin dressed as Ruby on the front lawn. Until somebody delivers Ruby’s doll to the house, piece by piece.

Determined to leave no stone unturned, Sylvie and Ray canvass the neighbourhood once more. Old Dulcie is angry at Ruby for teaching her parrot swearwords and blames Ray for not teaching his child about Jesus. Ex-clown Sid likes making children laugh, and watching the seductive Veronica perform striptease with the curtains open. Veronica is only interested in seducing Ray. Sonny Jim is an ex-soldier who greets his visitors with the barrel of a shotgun. Dawn used to babysit Ruby, now she only babysits dolls. Professor Ogle is grief-stricken that his portable black hole swallowed Ruby alive, and has written his confession.

The character of Ruby Moon is a modern Red Riding Hood reinvented inside a psychodrama and allowed to vanish within a culture of inane navel-staring. Australian Playwright Matt Cameron is compared to Samuel Beckett because of his use of absurdism and existentialism, although he says he is more influenced by Tennessee Williams, David Mamet and Arthur Miller. His works include Mr Melancholy, Footprints on Water, Tear from a Glass Eye and Hinterlands. He has also written scripts for serial TV dramas Seachange and Stingers. Published in 2003, Ruby Moon, his most renowned play, was short-listed for the Queensland Premier’s Literary Awards.

This is the second production by Sydney’s Devil May Care theatre company, founded by emerging young artists Clare Nesbitt-Hawes and Sasha Misrachi. In mid 2009 they staged The Return by Reg Cribb, a thrilling late night train ride from Perth to Fremantle.

A living room set framed with three pairs of doors served as an effective setting for Ray and Sylvie’s living room, and those of the neighbours’ houses. The female characters were performed with conviction and humour by Sarah Aubrey, who transformed remarkably from the eccentric and elderly churchgoing, parrot-loving hunchbacked Dulcie, to the alluring Veronica, femme fatale. Brynn Loosemore was enjoyable in the male parts, but lacked the extent of dramatic flair and conviction during what could have been more powerful moments.

Devil May Care is a talented unit of emerging artists, performing well-chosen pieces. They set the bar high with The Return, and while Ruby Moon didn’t achieve quite the same level of dramatic tension; the plays have earned the company a reputation for quality theatre.

Lawrence is an arts writer for various websites. He graduated from the University of Canberra in 2005 with a Bachelor of Arts majoring in Journalism, and has written for several media companies on a variety of topics. He spends much of his spare time reading, appreciating the arts and traveling the world.