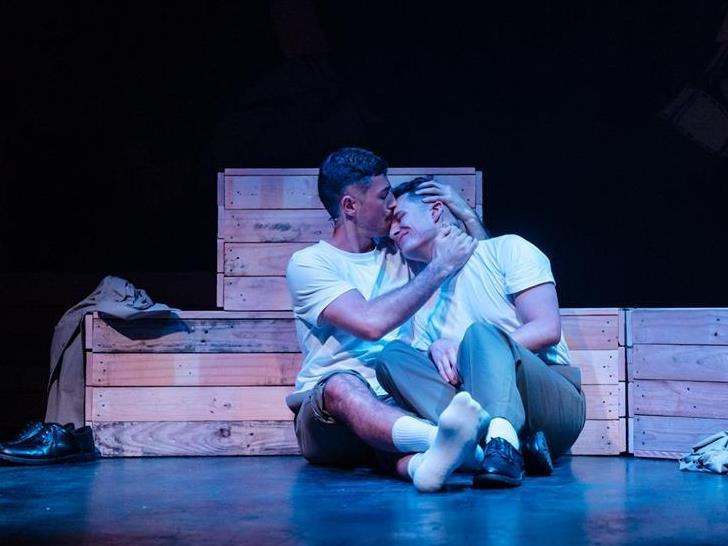 Mitch (Alex Gibson-Giorgio) and Stu steal a quiet moment together in Yank! Image via Facebook.

Despite the discipline, deprivation, and ever-present threat of death on the front line, life in the US army during World War II was a time of surprising joy for some young American men and women. Freed from constant parental supervision and living in a sex-segregated, intensely homosocial environment, it was possible for gays and lesbians in the military to discover love for the first time – even if such love was forbidden and fiercely punished whenever it came to light.

Against the odds, some gay men at this time managed to develop social networks that were surprisingly sophisticated and brazen.

Stories of self-discovery and falling in love during wartime – as detailed in the 1994 film Coming Out Under Fire and more recently explored by Australian historians – inform the Zellnik Brothers’ charming and compelling off-Broadway musical Yank! A WWII Love Story.

The production opens in the present day with a young man (Andy Johnston) recounting his discovery of a battered old journal in a junkshop – a soldier’s diary from WWII. On the journal’s opening page, ‘in very neat handwriting,’ are written the words ‘No matter what I do, I keep remembering you.’ Discovering the words are lyrics from a song, our nameless narrator buys the track on iTunes, and inserting a pair of ear pods, plays the song and slips into reverie.

Johnston’s narrator transforms into the diary’s author, Stu, a nervous young man who enters basic training only to fall in love with fellow private, Mitch ‘Hollywood’ Adams (Alex Gibson-Giorgio). Mitch is clearly attracted to Stu but struggles with his nascent desire, pushing Stu away after their first passionate kiss on a late-night train.

Rebuffed, Stu is conscripted as a contributor to Yank Magazine (‘the serviceman’s journal … not stiff and boring like Stars & Stripes’) by the flamboyant Artie (Elli Cooper), a photographer, who introduces him to the diversity of gay life in the army and encourages him to sow his wild oats (‘Now’s our chance/Nation’s distracted/ It’s ‘bout time we acted’).

But when Stu and Mitch are reunited in the Pacific Theatre and their loving embrace is observed by a fellow soldier, the stage is set for tragedy – especially when Stu’s detailed and revealing journal is discovered by the authorities…

Featuring songs composed by Joseph Zellnik, and a book and lyrics by his brother David, Yank! is a compelling and carefully researched retelling of gay life in WWII, as well as a fascinating insight into then-contemporary views on masculinity and sexuality.

Dramatically, Yank! deliberately recalls Broadway’s classic musicals; it’s heartfelt without being earnest, old-fashioned without being staid, and refreshingly un-cynical. An engaging pastiche of musical and theatrical styles, the production features everything from a doo-wop homage (‘The Saddest Girl What Am’) and an Oklahoma-style dream ballet, to an exuberant tap-dancing routine (‘Click’). Its story moves quickly – sometimes too quickly, with occasional transitions feeling oddly abrupt. And while the central romance is poignant, it sometimes strains credibility, such as a scene where Mitch dreams of an impossible post-war domestic life for Stu and himself (‘A Couple of Regular Guys’). While charming, the sentiments expressed seem more than a little out of character for the down-to-earth Mitch, even as a flight of fancy.

Supporting characters, who reference the ‘it takes one of every kind’ platoon films of the period, are largely two dimensional, though Naomi Price – the only woman in the cast – impresses across a range of roles, from butch army lesbian to ballad-singing radio star. Collectively, the cast harmonise beautifully, with Jarrod Moore as the thuggish Tennessee and Henry Kafoa as Czechowski especially notable.

Of the leads, Johnston demonstrates emotional heft and sings attractively; Cooper has a lovely blend of sass and sincerity and also proves an extremely capable dancer; and Gibson-Giorgio is appropriately charismatic as the soldier nicknamed ‘Hollywood’, though his singing occasionally lacked restraint on opening night and his emotional outbursts sometimes verged on the histrionic.

While often moving and always engaging, thanks in no small part to Dan Venz’s dynamic choreography and a seven-piece band led by Trevor Jones, this independent production of Yank! is unfortunately let down by Ian Good’s direction and blocking. He emphasises emotional nuance and dramatic momentum, but has prioritised the experience of one third of the audience at the cost of the majority.

The Visy Theatre at the Powerhouse is a challenging space in which to work, with the audience seated on three sides of the thrust stage, but Good has directed as if in a proscenium arch theatre, focusing the action forward almost constantly. As a result, the emotional impact and intimacy of many scenes (including the all-important first kiss between Stu and Mitch, where two thirds of the audience can only see the backs of the actors’ heads; and a faux-film screening which can barely be seen from many seats) is significantly reduced for anyone seated to the sides.

With key emotional moments weakened as a result, Good’s directorial choices mar what might otherwise be a compelling production. Yank! is a delightful musical, but this frustrating production doesn’t fully deliver on the show’s potential.

Richard Watts visited MELT as a guest of Brisbane Powerhouse.