A sense of the open, of fear, and of the possibility of danger pervades this mysterious and emotional production.
Judith Greenaway 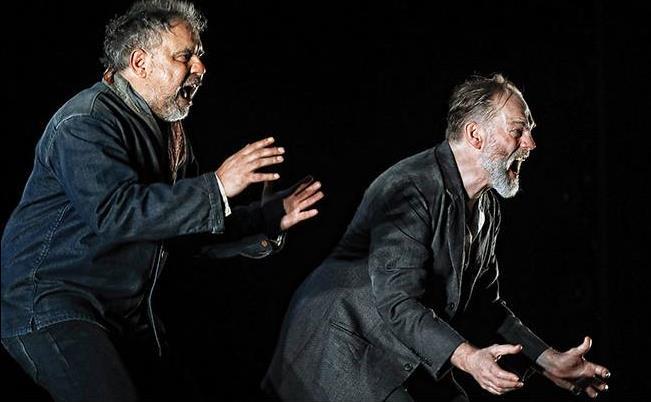 Surely that must be a curlew, and perhaps a boobook, joining the bass grumble of a twilight frog echoing through the almost empty auditorium. Together with the blue steel night on the rough hewn set, the audio presages an immersion into the Australian bush setting of Wonnangatta from Sydney Theatre Company. When the socially distanced audience is suddenly cast into pitch black, it is unsettling and evocative. This sense of the open, of fear and of the possibility of danger pervades this mysterious and emotional production which begins as night returns and two tight-lit faces appear and lean towards us.

Riggall (Wayne Blair) and Harry (Hugo Weaving) are at the beginning of a mystery. In 1918 in rural Victoria, their friend, the manager of Wonnangatta Station, has gone missing. Clues mount: a beloved dog uncared for and a foul-tempered station hand gone missing, as Riggall and Harry attempt to work out what has happened here.

The here of the events is sustained by the poetry that replaces that pre-show bush evocation – poetry in all but form from writer Angus Cerini, the Australian vernacular stripped to rhythms and phrases reprising and echoing in the craftsman’s hands of Blair and Weaving; Weaving with the lengthened delivery of a man in constant thought and Blair offering the quick and clipped of a savvy questioner. They speak in present tense with an air of having told this story over many years and, considering they never look at each other, they may well be in different pubs, each with a free beer provided by an eager audience to the goings-on at Wonnangatta.

Under Jessica Arthur’s assured direction, these are occasionally synchronised bushmen, with stability and a laconic economy of movement in roaming the raked stage and rhythmically riding dangerous trails in search of answers. The slope is mostly ignored, until they ride off-track in the fog and snow of an ancient land. The Bastard’s Neck sequence is arguably one of the most superbly designed and delivered goosebump moments of Australian theatre.

Wonnangatta has a deeply considered simplicity in the tech and design to match the lyrical swirl of the reverberating lyrical dialogue. The slatted stage has pre-chainsaw palings to evoke a slab hut, and the almost exclusive use of side lighting presses in the darkness around the men. The lighting design is beautifully limited in palette to that shimmer of pre-pollution night stars rather than any attempt at bush greys or gum greens. There’s avoidance, too, in the equally restrained score, and as a result, the one occasion when the line ‘birds set up a chorus’ brings a single sustained note causes chills. The sparely used music wavers in valleys until the percussive punctuation of a muffled drum heralds the ending.

This play appears to have a theory about this famous mystery. There are historic documents easily accessed before one sees the show but, perhaps, a little ignorance allows a deeper immersion in this production. The real life facts a wombat hole to be dived down into afterwards, for this is a thrumming and immediate theatre experience to be revelled in for its beauty and terrors.