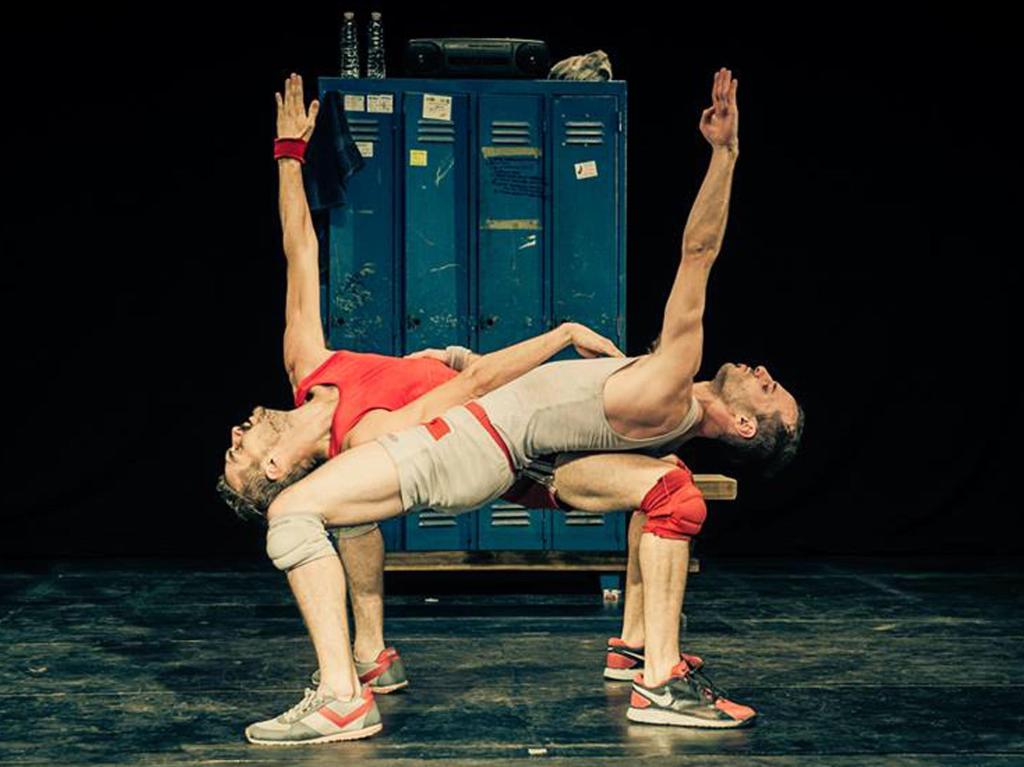 A crowd-pleasing production blending ballet and Beyoncé, cock fighting and pop culture, Un Poyo Rojo begins in silence before introducing a live soundtrack provided by channel-surfing between local radio stations, to which the pair improvise at every performance. Simultaneously they shift seamlessly between a sequence of set routines exploring masculine rivalry, competition and homoeroticism.

It’s relatively rare to see dance as comedy performed on Australian stages, even rarer to see it presented so exquisitely, with both men in full control of their bodies, whether performing fluid leaps and pirouettes or precise leg extensions and toe articulations.

Indeed, Rosso and Barón display extraordinary physical process from the moment the audience enter the theatre, their on-stage warm-up exercises already demonstrating their flexibility and fitness.

For the majority of the performance the pair wear little but nondescript t-shirts and tracksuit pants; later, skimpy basketball shorts and kneepads are donned, but not before droopy underpants and a flash of bum crack are displayed, provoking yet more laughter – especially, though not only, from the children in the audience.

The sparse set consists of a few lockers, a wooden bench, and the radio, which is contested territory between the two men. Fiddling with the dial sparks spirited responses in the form of a new dance sequence every time the station is changed, with t-shirts becoming red capes at an impromptu bullfight and cigarettes playing a pivotal role in shifting the tone of the performance from aggressive to flirtatious – though at an earlier point Rosso also uses them to hilarious effect.

As the performance unfolds, whether strutting and squawking, dabbing or voguing, the pair find comedy at almost every opportunity – such as the contrast between a muscular physique and a mincing walk, or the resonant qualities of an open mouth. Simultaneously there’s a sub-textural tenderness at play thanks to the chemistry between the two that pays off in a genuinely charming finale.

The major flaw in the work is its lamentable tendency to recast behaviour which is clearly sexual harassment, even assault, as playful and flirtatious. Such uncomfortable undercurrents, which include Rosso forcing his hand down Barón’s shorts and refusing to take no for an answer on multiple occasions, are far more jarring and disquieting now than in 2008, when the work was first developed in Buenos Aires as a sketch comedy piece.

Conversely the production delights by rejecting the idea that a straight man’s response to his homosexual counterpart’s desires should be a cause for panic, disgust or violence. It’s a message all too appropriate for South Australia, the last Australian state to retain the ‘gay panic’ defence on its statutes.