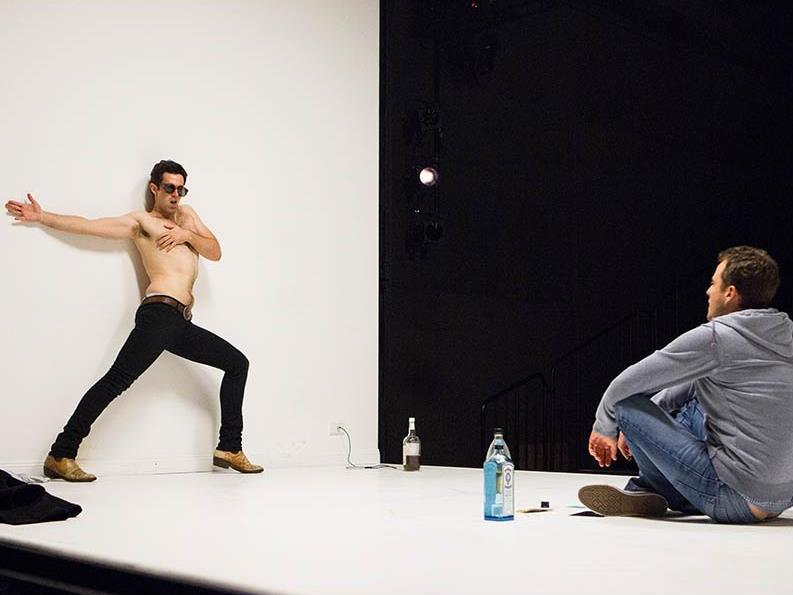 For all its power, and it is undeniably a potent theatrical work, Simon Stone’s breakthrough stage production now feels like something of a museum piece.

Thyestes premiered at the Melbourne Fringe Festival in 2010, at which time its casual misogyny might have seemed provocative, even daring. Today the play’s hyper-masculine banter and the treatment of its female characters reveal just how far the conversation around gender in the theatre has come in the intervening years. This is a play made by young men, at a time when Australian stages were dominated by men and their preoccupations and concerns – and it shows.

Nonetheless, there’s a raw power in the production, in which we can see the seeds of such subsequent Stone works as The Wild Duck (2011) and Yerma (2016) – the use of opera-like surtitles; the striking contrast between high drama and mundane, colloquial speech; the boxing-in of performers, which acknowledges the preposterous clichés of theatre in order to forget them.

Instead of glass walls, here the three actors – Thomas Henning as Thyestes, Toby Schmitz as his brother Atreus (a role originated by Mark Winter) and Chris Ryan as their half-brother Chrysippus (as well all the play’s female characters, including Aerope, Atreus’ wife, and Pelopia, Thyestes’ daughter) – are enclosed in a gallery-like white space, with black curtains descending at regular intervals to delineate the passage of time and cover a series of rapid scene changes.

Co-written by Stone together with the original cast – Henning, Ryan and Winter – after Seneca’s original tragedy circa 62 BC, Thyestes is a story of murder, madness, ambition, incest, rape and cannibalism. It’s certainly not a comfortable night out at the theatre.

Stone’s ability to generate tension is apparent from the opening scene – by the time the curtain falls for the first time, between scenes one and two, the sense of menace generated is palpable. Unfortunately, this is not sustained throughout the production, in part due to Stone’s decision to leap forward in time before rewinding back to the critical moment which forms the play’s bloody, bilious climax. Knowing what is coming deprives the play of dramatic tension; these latter scenes, with horror following horror, still shock but lack the genuine, queasy frisson generated earlier.

Performances are strong, especially Ryan in his numerous roles, though Stone’s directorial choices sometimes draw the eye away from Ryan at his most abject and helpless, towards Schmitz as the psychopathic Atreus, suggesting a lack of interest in the suffering of his female characters and a glorification of male power and rage.

The true heroes of this production are the stage managers, who flawlessly reset each scene in the limited time available, at one point even wheeling a piano on and offstage during the brief interval in which the curtains are lowered.

Ultimately, Stone’s Thyestes is a little like a magician’s box of tricks – once you know how the magic is done, it loses its appeal.