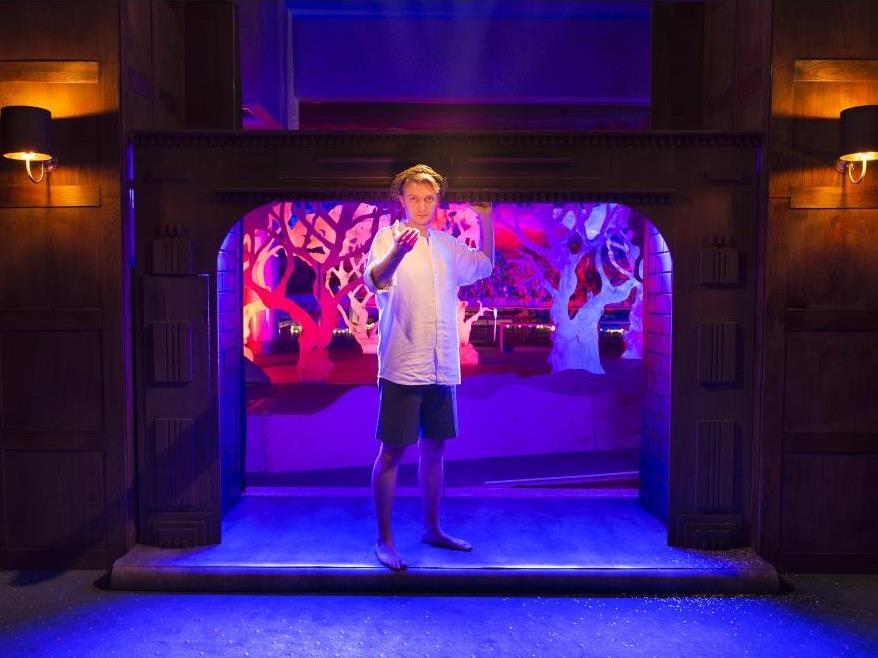 Adapted for the stage by Nicki Bloom, The Young King is currently touring Australia. Photo: Andy Rasheed courtesy of HOTA.

Possibly the best way to see any kind of art is with no expectations. None. Let yourself be taken on the journey as the artist intended.

So, do not even think of (re)reading The Young King by Oscar Wilde before you see this marvellously quirky adaptation from Adelaide theatre company Slingsby. Save it for the tram ride home.

This version of The Young King, based on Wilde’s story of the same name, is a fabulously imaginative production. Snuggled into a backstage chink behind HOTA’s main theatre, it is so familial; The Young King feels less like ‘theatre’ and more like a fantastic story told at an intimate dinner party. We can only assume all the show’s touring sites are in similarly peculiar locations.

The journey starts in the foyer, with costumed ushers asking us to ‘Remember Where You Come From’, and to ‘Look to What’s Inside Yourself’, before leading us through secret backstage corridors, past craft stations (yes, you read that right), and tiny installations. We were all in a state of wonderful curiosity by the time we took our seats around the tiny performance space. Whatever was going to happen next?

As one of the cast reflected in a post-show Q&A, the tiny stage with bench seats on three sides is designed to bring us all back to our primeval need for a good story around a fire or a dinner table.

Designed for small audiences – both in numbers and age – everything here holds an adult’s attention just as well as any eight-year old’s. Friday’s audience – many of whom haven’t seen a single digit birthday for decades – were all entirely entranced from start to finish.

With two actors (Lachlan Barnett and Jacqy Phillips) playing multiple roles and accompanied by Quincy Grant on piano and melodica, the trio create a vibrant visual tapestry that weaves Wilde’s tale back and forth before doubling in on itself.

Wilde’s social commentary on the inequalities of his age still sadly ring true today – and the Young King’s wish for fine clothes and jewellery could easily transfer to today’s penchant for designer handbags and fast fashion. Sweatshops, blood diamonds and child labour all spring to mind when the Young King dreams of the horrendous working conditions of his time. But Wilde does not let us off easily, and the commercial ecosystem, despite its horrors, also has its interdependencies.

‘By your pomp, we are nurtured,’ says one surly character, when the Young King reconsiders his greed. It’s not always easy to do the right thing.

Barnett and Phillips’s acting is seamless and well-supported by Grant’s deft musicianship which creates a mercurial tone. The rich tale is told through not only the actors and the music, but via cunning use of wall panels hiding pocket size scenes, and torches crafting puppet shadows. There’s tangible tension as the story swings between the merry, the macabre, the sad and the beautiful, and it keeps the audience from relaxing into the role of simply watching.

If the perfect theatre experience is to feel slightly uncomfortable, be taken on a journey, and to emerge in a state of wonder, then The Young Prince is a quirky slice of dramaturgical perfection.