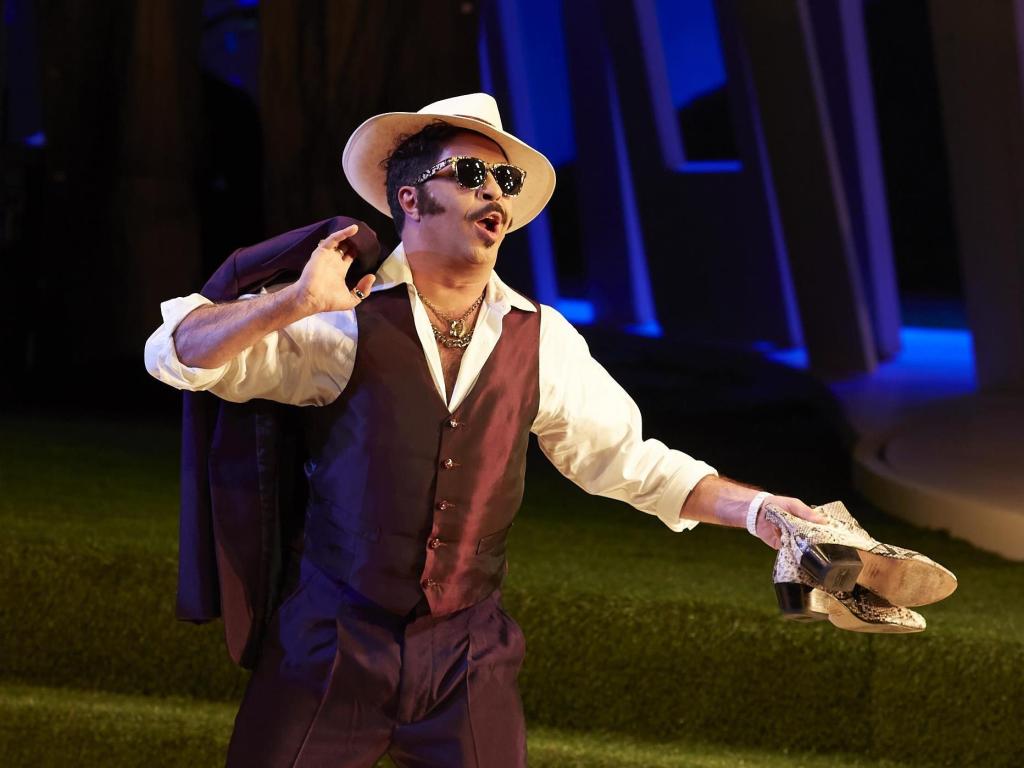 Paolo Bordogna as Selim in Opera Australia’s 2018 production of The Turk in Italy at the Sydney Opera House. Photo credit: Keith Saunders.

While Gioachino Rossini’s rarely performed The Turk in Italy (Il turco in Italia) may lack show stopping hits, the role of Fiorilla has been a great vehicle for sopranos such as Callas, Sills and Bartoli. First performed at La Scala, Milan in 1814, this opera buffa with a libretto by Felice Romani closely modelled on Caterino Mazzolà bubbles along with a sequence of well-paced and vigorous ensemble numbers that keeps the action buoyant and lively.

Originally set in 18th-century seaside Naples, its story is of the poet Prosdocimo, haplessly searching for a plot for his latest comic play. As the unlikely story of the opera unfolds before us, so does his plot become realised. The tale is a combination of mistaken identity and farce circling around Don Geronio; Fiorilla, his bored and flirtatious wife; Selim, a visiting Turkish Prince and Zaida, now a wandering gypsy who has escaped from the prince’s harem with amorous intent.

With masks and costumes aplenty, several love triangles stumble along before we see the happy resolve of Fiorilla’s return to her husband and Zaida sailing off into the sunset with her prince. Even for Rossini, the synopsis of A Turk is flippant and slight, yet on opening night in this sparkling production by Simon Phillips, the work was impossible not to enjoy. All that worried me was that in an interpretation so weighted towards slapstick it was difficult to discern any character development or subtleties of music.

Phillips’s production (first presented in 2014 and well revived here by Andy Morton) transports the work to the mid-20th century. The movie star glamour of the period is a recurrent theme. There is a quaint commedia dell-arte crudity to the production with its ‘modernised’ translation vulgarly highlighting the sleazy Selim’s prosthetic phallus, Fiorilla and Salim’s awkward and breathless manipulation of a champagne bottle and regular, centre-stage mock coitus under full spots.

On opening night, Warwick Fyfe in loud, checked fat suit and patchily dyed red hair stole the show as a truly grotesque Don Geronio; we could only draw feelings of utmost sympathy for his constant pathetic humiliation from every character on stage and especially his faithless wife. Stacey Alleaume as Fiorilla was in superb voice, though wearied in some of her Olympian coloratura work. Virgilio Marino as Narciso seemed underpowered, though gave his best to an oddly redundant role. Anna Dowsley as Zaida was superb, while Graeme Macfarlane as the constantly inebriated Albazar was unable to make more than a passing impression. Samuel Dundas as Prosdocimo was on stage most of the night and impressed for his solid, true voice and quicksilver acting skill. Improvement was needed overall in the rapport of the tongue-twisting patter arias and ensembles.

Australian Opera Chorus and Opera Australia Orchestra, sounding well in the newly adjusted acoustics of the Joan Sutherland Theatre, were both in fine form under the clear and expressive direction of Andrea Molino save for some messy string ensemble here and there that could be put down to opening night nerves. Recitatives were skilfully and stylishly accompanied on fortepiano by Siro Battaglin.

A highlight of the production came in Act 2 at the masked ball with the stage full of Elvis and Marilyn Monroe impersonators when Battaglin started up an impromptu rendition of Love me tender, love me true…