Review: The Nose by Opera Australia

Does absurdity make for the best opera? If we are talking audience reaction to The Nose then hands down, yes!
Gina Fairley 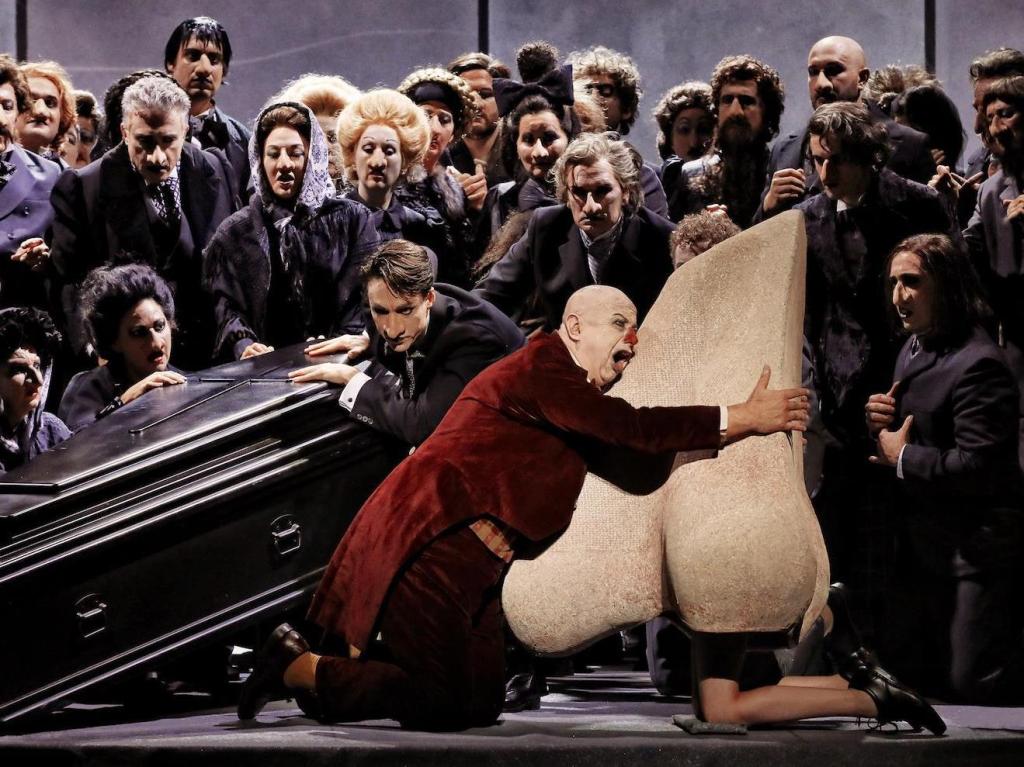 Bawdy laughter is not the usual emotion we expect of an opera – rolling, ludicrous laughter from start to finish. That is what audiences are offered in Dimitri Shostakovich’s The Nose, and in Sydney for the opera’s first staging in Australia – they responded!

Opera Australia appears to be balancing its season well and updating the jaded operatic palette – last year it was Prokofiev’s The Love for Three Oranges (1921) that offered that surreal alternative. This year is was it was a tap-dancing chorus line of giant noses and a riot of befuddled soldiers that captured imaginations.

The opera opens with the fabulously costumed public servant, Kovalev, having a shave by his barber … only to wake later from his sleep to find his nose had disappeared.

Yes this opera is essentially a surreal treasure hunt as an increasingly hysterical Kovalev searches for his nose in St Petersburg – written at a time when the Weimar Republic celebrated the creative arts and on the cusp of its future erosion by political regimes.

Kosky observed that you can ‘already hear the despair in the music’.

The Nose was adapted from a short story by Gogol and was Shostakovich’s first opera (1929) and, like most of his career, was received with mixed reviews. It had a dark side to it that is clearly a satire on authority and a satire on bourgeois corruption and public servants lofty status. But Sydney loved it.

And with the clever insertions of current dialogue – at one moment in the opera delivered by chorus members embedded in the audience – it had a strange currency that met the contemporary demand to be entertained.  Sung in English translation by David Poutney this opera is bought ever closer to the audience.

It is not surprising that Berlin-based Australian director Barrie Kosky’s name is behind this production. He is known for his inventive, bright contemporary take on opera; he is not known for playing it safe. And for The Nose, he reminds us to loosen up a bit – to forget our right-wing pontificating and high-brow opera tastes for a moment and embrace the ridiculous.

More than a sniff of creativity

The sets by Klaus Grunberg and Annie Kuhn are minimal in their staging – largely delivered on a central round podium – almost like raised mannequins in a shop display.

It allows for the fresh punchy colour of this opera to be delivered through its costumes and choreography, designed by Otto Pichler – from those infamous tap dancing noses to dancing policemen and bearded ladies in corsets and fishnets.

But despite its madcap fun, this opera is really polished into the highest echelons of operatic delivery, led by baritone Martin Winkler in the role Kovalev – a public servant who fancies himself as more in society. He is incredibly expressive – moving from overwhelming dramatic lament over the loss of his nose to rapturous joy in its reuniting.

He is matched by the renowned bass, Sir John Tomlinson, as the doctor and drunken barber – suspected as the culprit for the nose’s amputation – and Kanen Breen as the police inspector.

Antoinette Halloran as the pretzel maker, in whose dough the nose is first discovered, is strong in balancing this at times male-heavy opera.

It is hard to draw out all in assessing this opera – there are 78 singing and nine speaking roles in The Nose (all of whom wear prosthetic noses) and both the vocal and dramatic range they are to deliver is impressive.

Despite the light storyline, Shostakovich’s score is not your usual foot-tapper. The orchestra at times sounding haunted and at others burlesque-like, driven by a high octane energy. Conductor Andrea Molino drew both orchestra and chorus through with great expression.

The words that spring to mind in describing The Nose are: surreal, grotesque, bizarre, vaudeville, bewildering, mayhem, bawdy, madcap – you get the picture.