If you’re looking for a great night out at the theatre, a chance to laugh, and a peek back into the 1970s, then these shows are for you.
Oliver Wakelin
[This is archived content and may not display in the originally intended format.] 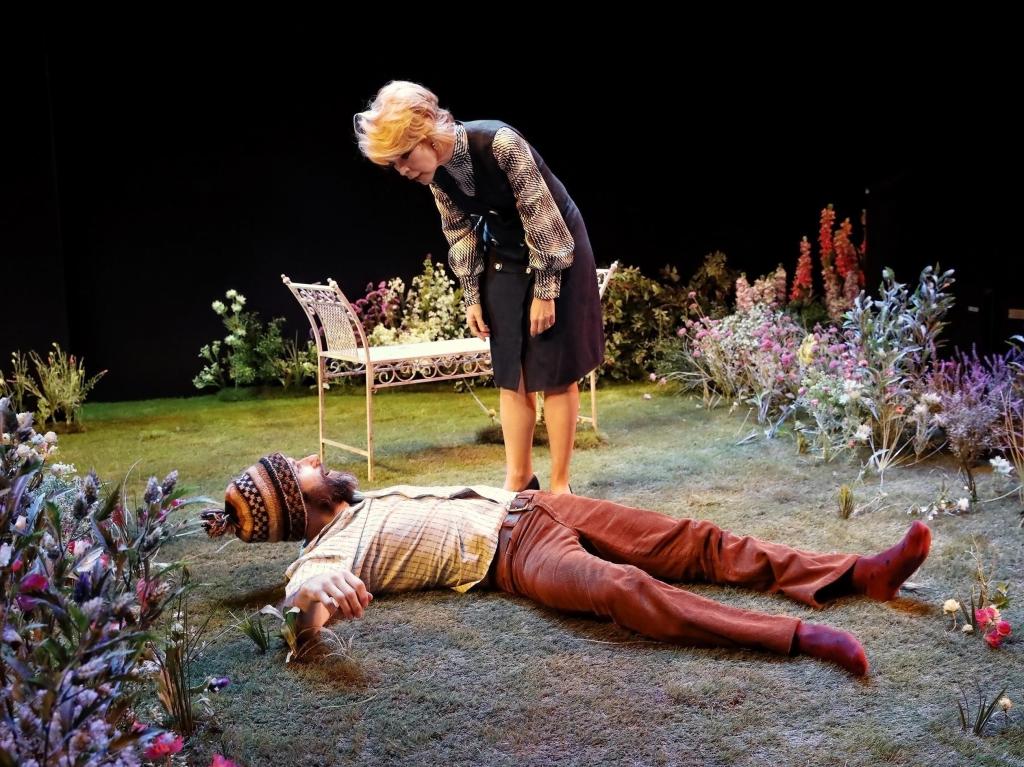 Yalin Ozucelik as Norman and Danielle Carter as Sarah in Round And Round The Garden, The Norman Conquests. Photo by Prudence Upton.

Norman and Annie have been planning a pleasant weekend away in the English countryside; Norman has even purchased special pajamas for the occasion. Complication: Annie is Norman’s wife’s sister, and before they can steal away, Annie’s happy-go-lucky brother and his eagle-eyed wife arrive on the scene. The family vet, who harbours a love for Annie which appears both promising and hopeless, knows something is up but can’t quite put his finger on it. The one thing he’s certain of is that they are all jolly good friends! When there’s talk of Norman’s wife arriving at the house, all eyes turn to the titular character, this unlikely Don Juan, in preparation for a melt down. Let the homebrew flow!

The action is set in the early 1970s, with the three plays, Table Manners, Living Together, and Round and Round the Garden, offering three separate insights into the weekend. One is set in the dining room, one in the sitting room, and one in the garden. They don’t have to be viewed in order (reportedly there is no correct order), and while each play is a piece of the main, every one is an island entire and of itself. Each offers a complete experience; seeing more than one heightens the experience of each.

The highly lauded playwright, Alan Ayckbourn, has written 82 plays, nearly all of which had their debut at Stephen Joseph Theatre in Scarborough, where he was Artistic Director from 1972 to 2009. More than 40 of them have gone on to be produced in the West End since his first success Relatively Speaking in 1969. Suffice it to say that Ayckbourn was the first British playwright to receive both the Olivier and Tony Special Lifetime Achievement Awards. In the program notes he is quoted as saying that the Norman Trilogy itself was composed in less than two weeks, and that two of the plays were completed in a single night! Ayckbourn posits that as the plays are so widely translated and performed, it’s likely that at every moment, somewhere in the world, a Norman is wooing an Annie.

As for this thrilling production, the performances are a joy to behold. I viewed all three shows on a single day, and by 9 o’clock the actors were into their 5th or 6th hours on stage, yet still full of vigour. Norman is such an outlier, such an unusual and intriguing man, that it requires an extraordinary actor to bring him to life, and sustain the audience’s sympathy. Yalin Ozucelik manages this with seeming ease. He’s just so funny, and delivers perhaps the best drunk acting I’ve seen. Danielle Carter as Sarah is a tower of strength, a backbone of power in these shows; she disappears completely into the character. Detailed and subtle performances from Brian Meegan and Matilda Ridgway won me over quickly.

One of the first things I realised on entering the theatre was that the back to back staging of three plays in three locations offers a tremendous challenge, and therefore opportunity, for any set designer. The breadth of Hugh O’Connor’s talent as designer is on display in this triptych. The design for Round and Round the Garden was particularly appealing; the floral arrangements were rewarding to the eye, and gave the actors a theatrical Eden to draw inspiration from. Inside the house, details like the Persian rug, the dresser and the Willow patterned crockery all combined to whisk me away to a time when progressive and conservative lifestyles were so at odds. The costuming (also by O’Connor) was a pleasure to behold, featuring ascot caps, a purple almost satin business/pleasure jumpsuit, and some very fetching, and potentially dangerous, pajamas. The lighting states (Scott Allan) skillfully complimented the set design, subtly transporting us through time from morning to night, and accentuating the colours in the garden. The direction itself was masterful (Mark Kilmurry), evidenced by a wonderful rhythm underpinning all three pieces, driving everyone inexorably forward towards hysterical highs and touching lows. In comedy, so much depends on the timing, and I truly felt I was in the safest of hands with Kilmurry.

At times this production highlights how much has changed for the better since the 70s, and conversely how much remains the same (and perhaps how much further there is to go). I recommend you get along to these shows for a night of good feeling and fun.