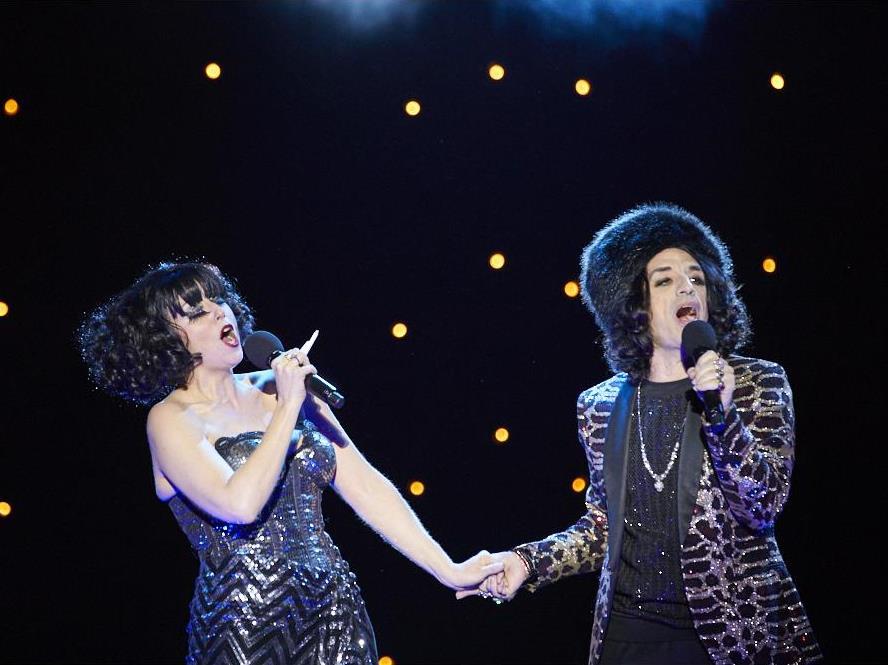 I’m not entirely sure that the Adelaide Cabaret Festival is indeed the biggest and best in the world, but who am I to question the press release? And with over 380 artists in 245 performances over 16 nights, it’s certainly big, brassy, and very glitzy.

Television’s much-loved Julia Zemiro is the artistic director for this year’s Cab Fest and was the host for The House is Live, the gala opening event. Unlike previous years, the gala featured many invited cabaret stars who are not performing in the festival. This changed the dynamic of the evening from a showcase of festival acts to a stand-alone night of cabaret.

And also unlike previous years, it was staged at the Thebarton Theatre, usually the home of touring country bands and wrestling tournaments. ‘The Festival Theatre was triple booked,’ acknowledged Zemiro in the opening. But that wasn’t such a bad thing, with the faded grandeur of Adelaide’s beloved art-deco Thebby echoing the shabby chic appeal of traditional cabaret.

Zemiro was an extremely likeable and charming host from her Eurovision-style welcome to the end of the packed program. Directed by Craig Ilott, this very slick show featured a host of cabaret stars, four dancers, a live band, and two impressive gold confetti canons.

After a musical Welcome to Country from Karl Telfer, the evening kicked off with a duet by Zemiro and Mitchell Butel, artistic director of SA’s State Theatre and an actor with a strong background in musical theatre. The Frank Sinatra/Bing Crosby classic ‘Well Did You Evah’ from High Society was given a very Adelaide twist with new lyrics by Zemiro and Butel for the occasion.

The totally irrepressible Reuben Kaye was the first star with his anthemic ‘Look at Me’. He didn’t need to ask twice – he was simply mesmerising. And he was back again later in the show, all sequins and eyelashes and amazing vocals, the perfect polished showman. This was Kaye’s only appearance at the Cabaret Festival as he’s doing an Auckland run now and the Sydney Cabaret Festival later this month.

Kaye was a hard act to follow but Melbourne chanteuse Alma Zygier sang two beautiful numbers, including ‘The Trolley Song’, heard the other night in End of the Rainbow. She’s appearing next weekend with her Alma Zygier Quintet at the Space Theatre.

The show powered on with performances by many of our leading cabaret favourites including the delectable Meow Meow, the divine Paul Capsis, who can sing a torch song like nobody else, and the magnificent (and very funny) Queenie van de Zandt.

Whilst the program was loaded with the singers and songs of cabaret, two acts changed the pace. Omar Musa, a rapper and spoken word artist who won best cabaret at the Sydney Theatre Awards this year, gave the concert some grit, while the UK’s Flabbergast Theatre startled the audience with their recreation of the street world of The Swell Mob.

There were some serious moments too as Meow Meow received the Cabaret Icon Award and there was a tribute to the late, and much-loved, Frank Ford who founded the Adelaide Cabaret Festival. Previous Cabaret Icon Award recipients include Ford, actor Robyn Archer, and the great Reg Livermore.

A duet of Get Happy with Meow and Capsis led into a full cast finale that had the audience on their feet. And in truly professional style, they took their bows and exited the stage leaving us begging for more.