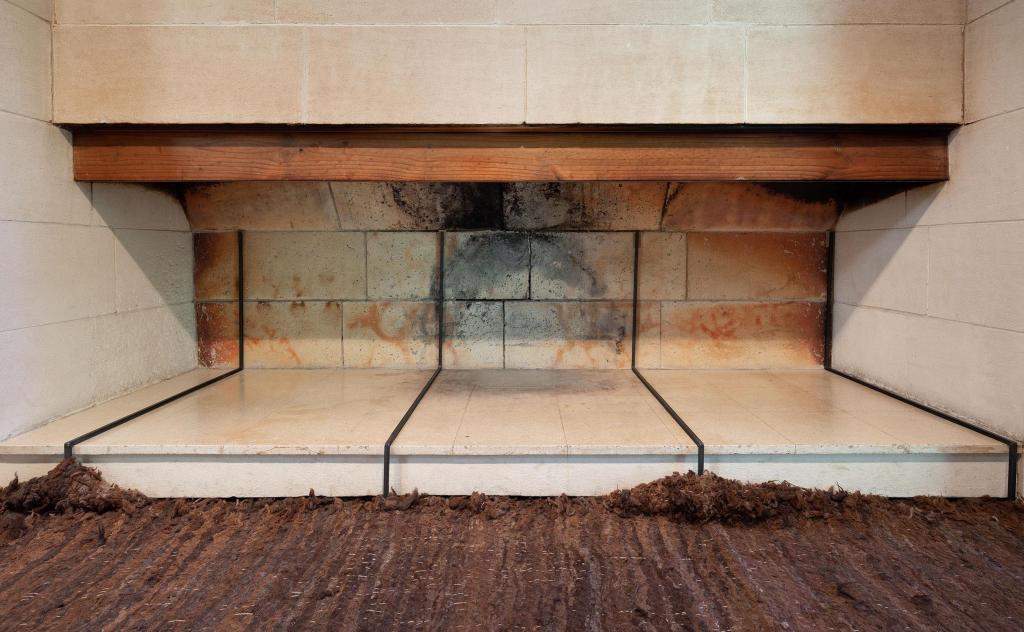 Carolyn Eskdale’s exhibition Memory Horizon features site-specific interventions that directly respond to Heide II, the former residence of arts patrons, John and Sunday Reed. The residence was commissioned in 1963 by architect David McGlashen to accommodate the growing number of artists that the Reeds supported throughout the mid-twentieth century. The building formed part of a cultural institution on the outskirts of Melbourne city and was recognised for its achievement in modernist design.

Within this historical building, Eskdale has created installations that trace, fold, extend and frame architectural features, encouraging observation and awareness of space. The exhibition explores the relationship between public and private space, while considering past and possible modes of inhabitation. Installations are thoughtfully interposed throughout the home, while photographs of previous insertions hang on the walls, generating dialogue between old and new sculptures.

Memory Horizon ultimately begins by highlighting the journey of approach and accessibility into the building. Punctuating the front entrance passage are four steel poles, each with a small bronze sculpture on top. Once passing this installation and moving inside the building, interventions start to articulate the interior character of the home. Visitors walking through the ‘study’ will discover five timber studs situated along the perimeter of the room, each fixed with a central aluminium plate. The timber studs emphasise the ceiling height of the space, while the aluminium draws attention to the reflective light and shadow.

Within the old ‘powder room’, two steel extrusions project from the wall, both displaying hand moulded bronze casts. Interventions in the ‘conversation pit’ highlight the existence of the lounge chair and interior firepit by removing furnishings and delicately tracing the profile of each with angular metal rods.

Downstairs, the exhibition continues to reveal the spatial qualities and conditions of Heide II. A small piece of wax has been carefully wrapped over the stainless-steel handrail beside the ‘lower window’, and a large installation proudly positions itself within the ‘lounge room’, expanding into the open space with what appears to be timber stud walls and polyurethane cladding. The smell of the polyurethane permeates throughout the building, creating an olfactory sensory experience. In the ‘laundry’, Eskdale has stacked blocks of limestone on top of one another, with layers of latex looped in between. The blocks draw attention to the limestone walls, which are the predominant building material used within the house.

Eskdale’s installations explore the intimate relationship between what is personal and what is in communal.  What was once a residential home is now a gallery for the general public. The interventions frame past moments of domesticity and inhabitation, while considering the present, and possible futures. Materials such as wax, plasticine, polyurethane and steel casts emphasise the ephemeral qualities of the exhibition by exposing the traces of the artist’s fingerprints and hand marks.

Eskdale has produced a gentle and thoughtful response to the architectural qualities of the former residence and celebrates observation and awareness of past and imaginable modes of inhabitation.