An intimate evening of shared personal stories. Rayson is a true storyteller.
Liza Dezfouli
[This is archived content and may not display in the originally intended format.] 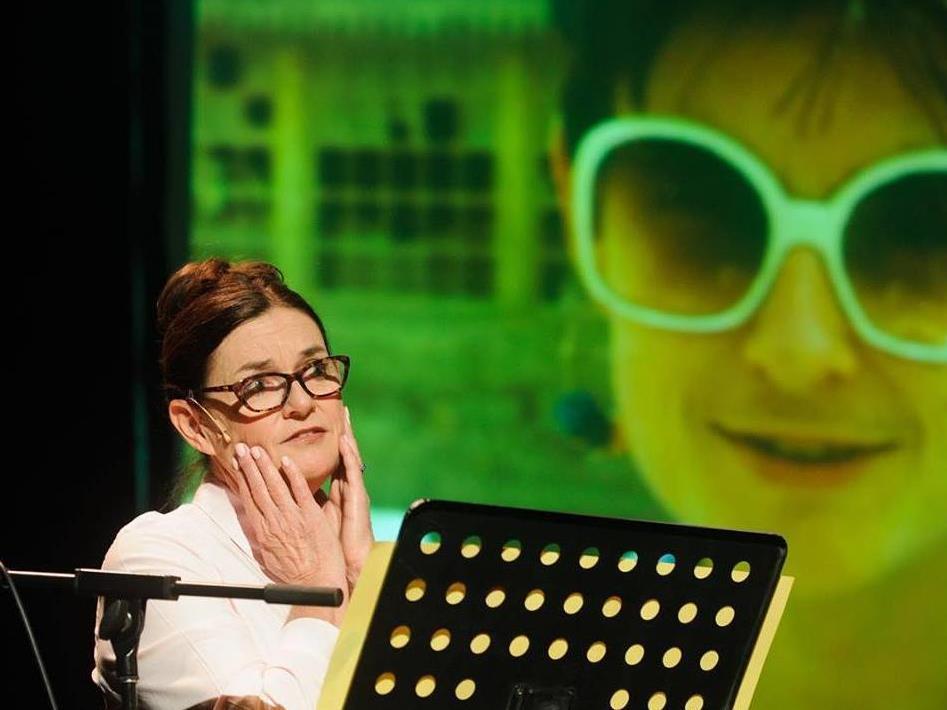 Playwright Hannie Rayson has written a memoir called Hello, Beautiful! and has been performing a show of the same name, presumably to promote the book. Rayson’s one of Australia’s favourite storytellers with Hotel Sorrento and Life After George enjoying regular productions. Although her later plays have had mixed responses and a recent work was rejected by the MTC, in this show, Rayson is in her element.

Hello, Beautiful is a piece of graffiti, words dripped in red paint à la Jackson Pollock, appearing around the streets of Fitzroy. Towards the end of the show Rayson shows us projections of the graffiti, telling us of her search for the street artist, who remains mysterious. This story ties in nicely with an earlier experience (probably universal for our generation) in childhood of boys on the bus calling out ‘Hello Beautiful!’ then ridiculing her when she turned towards them.

We see Hannie at her writing desk, at the microphone, and she uses projection, including photos of her younger self (her name’s really Helen but as an infant she called herself Hannie and it stuck) with her family and performing in early theatrical works. Rayson comes from a conventional Aussie background: mum and a dad and two siblings, living in Brighton in the years before ‘Brighton’ became synonymous with wealth. She remembers her family driving with their kitchen pots to buy Chinese takeaway, describing the excitement of looking forward to eating chicken with cashews.

A socialist and a feminist from a young age, Rayson attended the VCA to train as an actor and fell into playwriting via a strong nudge from the Dean at the time just as she was about to quit. He gave her a key to a writing space, and this set her off in the direction of writing for the stage, where she has shined. The key acts as a motif in the show, used as a reminder that the key to understanding oneself comes via the telling of one’s stories, and how a turn in one direction, a chance event thought little of at the time, will hold significance later on.

Performing Hello, Beautiful!, a show about herself, at Theatre Works feels special to her, Rayson tells us, as she was one of the theatre’s founding ensemble.

On the whole Rayson’s had a lucky life, not without its vicissitudes, naturally – a life both ordinary and not. There are shared house experiences, a delicious tale of revenge on a cheating lover, we meet her son, hear the story of her afternoon with painter Arthur Boyd and how this memory becomes intrinsically linked with a personal tragedy.

Rayson tells us small human stories we can relate to. One she doesn’t tell (because it’s somebody else’s), is about the support and kindness she gave a struggling young woman years ago, mentioned here only to confirm how she’s genuinely kind, something which comes through, albeit unintended, in this show.

Being headhunted to co-write a Hollywood musical is definitely a story out of the ordinary. It’s fun hearing how the time when Rayson was on the verge of making it big. Her acting training stands her in good stead throughout but here she gets to play some of the characters from her times in New York and Los Angeles.

None of the stories in Hello Beautiful are sensationalised, rendered sentimental or intended to impress. The snippets and moments are curated to create an atmosphere where you feel like you’ve gotten to know her. As a performance, Hello, Beautiful! isn’t quite a dinner party, it’s more of a picnic or late afternoon barbecue in autumn.

Rayson is clearly well-loved by her partner, ABC broadcaster Michael Cathcart, who joined her on stage at the end of her show on Friday night to take questions. Fortunately, this display of domestic cosiness just managed to eschew smugness – for the cynical and unromantic among us it was a pleasure to witness Cathcart’s pride in Rayson.

And that’s about all there is to be said. Hearing Rayson’s stories brought to life, presented with a playwright’s attention to dramatic weight and balance, transitions, segues and narrative momentum, is an experience of poignancy and quiet delight. Good on her.

By Hannie Rayson
Presented by Theatre Works
2-6 May