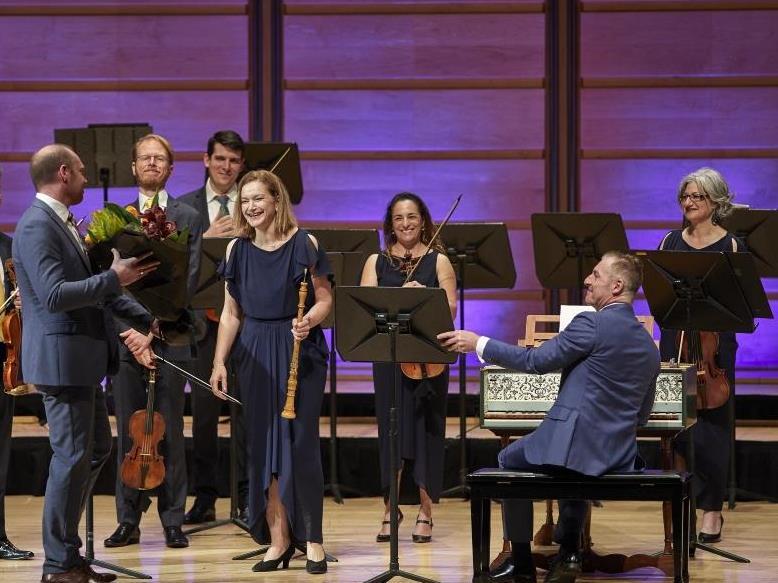 Emma Black with the Australian Brandenburg Orchestra at the opening night of Handel’s Anthems and Fireworks. Photo: Keith Saunders.

As part of its multi-city tour celebrating its 30th anniversary, the Australian Brandenburg Orchestra has presented an all-Handel program under the ebullient direction of its founding conductor and artistic director Paul Dyer.

The regal theme of the program created an exciting atmosphere through the near-capacity audience. Opening with the Coronation Anthems commissioned for King George II in 1727, we were pinned to our seats with the powerful beginning utterance of Zadok the Priest by the Brandenburg Choir, comprising 30 or so freelance singers from Sydney and Melbourne. Here was a young ensemble with a luxuriously rich soprano line, combined with equally accomplished countertenors, tenors and basses. Together they provided a very listenable and stylish ensemble with careful tuning, strong rapport, good diction and expressive ornamentation – and, when the music required it, some thump and majesty. Though unconventional in reviewing a distinguished and mature vocal ensemble such as this, I’m induced to highlight one stand-out vocalist, Austin Haynes from Melbourne, whose alto voice consistently impressed with intelligent attention to detail; it is hoped that we will hear him later in his career in a solo capacity. The Four Anthems were performed with ebullience by the choir, though it is hoped that some untidy upper string playing along with occasional coarse rapport within the orchestra will be smoothed out as the tour progresses.

The orchestra then reduced in size for Handel’s comparatively restrained oboe concerto featuring the soloist Emma Black, now leading an impressive career with significant orchestras in Europe. Black’s performance of the concerto was mature and freely expressive, particularly in the delightful Largo movement, though some technical issues with her instrument withheld the overall accomplishment from excellence.

Another standout performance of the night was the Music for the Royal Fireworks, which was written to accompany a firework display in Green Park, London, to celebrate the War of the Austrian Succession. Here, exuberance abounded: Dyer was truly in his element exhibiting his characteristically flamboyant conducting style with wild sweeping gestures in ascending waves and dramatic gapes on stage from left to right. How much this was effective for the orchestra as opposed to mere posturing could be debated. All that was lacking were the fireworks themselves, which would have presented further excitement but doubtless also some serious OH&S concerns.