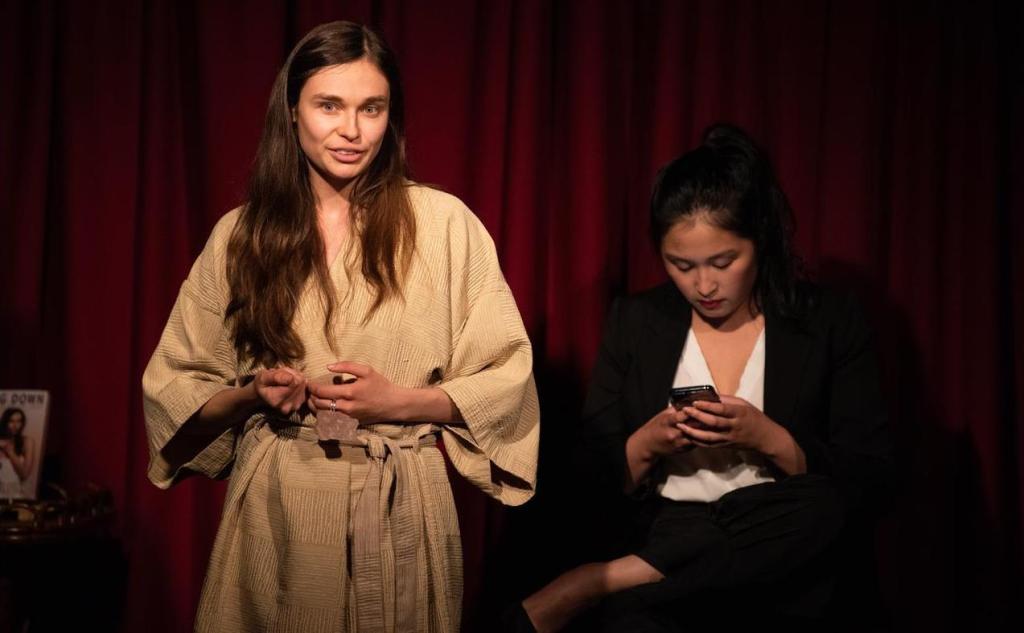 Going Down: How to Stay on Top When You’re Getting Sucked Below is a gutsy effort from It’s All Happening Theatre. There’s a unique character, some well-considered video and a logical framework for the show. The Truru may not make her imprint on your life but a night at live theatre which has a point to make is never ‘truly’ wasted.

The Truru – a self-styled life coach and would-be influencer – is created by Trudi Ranik with a very strong sense of who this character is. The character previously appeared in a season at Melbourne Fringe 2018 but this outing focuses on her comeback after her closest confidantes and followers turned on her. The Truru was trolled for insincerity and being a false prophet – a dangerous one. After talking to the kettle and some dubious singing involving her cat, Namaste, The Truru has come out of her stay-in-bed depression to emerge with a new book, Going Down: How to Stay on Top when You’re Getting Sucked Below, and a speaking tour. The audience is gathered in a search for renewed wisdom.

The Truru is created by Trudi Ranik with a very strong sense of who this character is. The script is written with some clever use of language such as ‘cataroki’ and ‘possessed Dyson’ and there are aphorisms and sayings which give rise to wry smiles when the audience is travelling with her. The journey is a little limited, however, and poor Truru doesn’t seem to have thought through how to successfully engage her audience with the appeal to emotion, drama and stakes play that is used by these master manipulators. There is a very strong sense that she is a bite-size small screen character.

There are mini sections in the script which show promise in that regard. A surprise visitor appears and that character is a good foil who helps with the comedy and energy; she has a finger-click running gag which is great fun. There are other concepts in Going Down which have potential – an animal aggression ‘therapy’ encounter and some nicely scripted standalone advertisements. Though the logic of using The Truru’s book as the shape could be quite effective, in its current form there are too many sections which are overextended and unmodulated.

Video sequences and title cards are used throughout the show and they are an indicator of the effort which has gone into the production. Audiences for independent work are very forgiving of elements such as the poor audio but respond positively to the creative reasoning behind the use of video, and in this production its use has a clear function. One little section of stills of the lovers is beautifully created and quite purposeful. There are some technical issues with washing out and white lettering on light backgrounds but there are lively choices of music behind the video sequences.

As an exploration of falsity, The Truru may overstay her welcome this time round, but who knows what Ranik will satirise in her next foray into the world and absurdity of money-making advisors.

Going Down: How to Stay on Top When You’re Getting Sucked Below
Written by Trudi Ranik
Cast: Trudi Ranik, Vivian Nguyen
Costume and set: Rose Baird
2-7 March 2020
The Butterfly Club, Melbourne VIC
Tickets $35