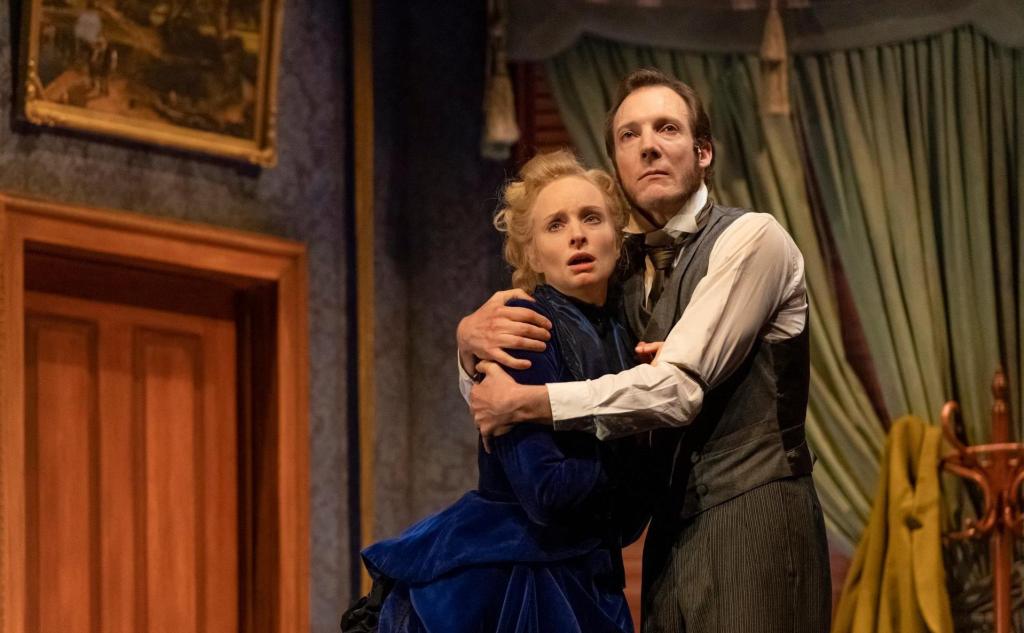 Gaslight is a classic drawing-room drama, written by Patrick Hamilton in 1938 and set in Victorian London. The entire play is set in one room and takes place over a single day. It is largely a two-hander throughout, adding to the tension and suspense.

At its heart is the unsettling relationship between Bella and Jack Manningham. Bella is skittish and terrified of succumbing to the madness that haunted her mother; Jack is very much in control and skilfully exploits his wife’s fears. As the play unfolds, we see there is more to this than emotional cruelty. Jack has a secret and manipulating his wife is very much part of his plan.

Bella and Jack are wonderful roles for the actors. Bella, played here quite delightfully by Ksenja Logos, ultimately gets the last word. It is, in that regard, a revenge thriller, and Bella has the entire audience on her side. It’s such a great role that Hollywood star Ingrid Bergman won an Academy Award in 1945 for her portrayal of Bella in the film adaptation.

Jack is a gentlemanly brute – charming and erudite but also mean and manipulative with a ‘taste for unemployed actresses’. And he has a dark past that is not revealed until late in Act 2. Nathan O’Keefe captures the confidence and desperation of Jack as he strides across the stage, chides his wife, and exploits his domestic staff. Ellen Freeman and Katherine Sortini give marvellous performances as the Manningham’s housekeeper and maid, finding an endearing balance between duty and comedy.

The star of the show is undoubtedly Eileen Darley camping it up in a genuinely melodramatic style as Inspector Rough. The audience loved Darley from the moment she opened the show as a music hall performer singing ‘Following in Father’s Footsteps’.

Director Catherine Fitzgerald terms the play a ‘friller’ which is a rather lovely portmanteau word for a ‘feminist thriller’. Indeed, there are deeper concerns about class and gender underlying this play. Patrick Hamilton was a committed Marxist and his politics infused much of his writing. Fitzgerald takes a gentle hand here, highlighting the power relationships without becoming didactic.

It is said that the term ‘gaslighting’, meaning to manipulate someone into questioning their own sanity and reason, came into common usage based on this play. Only this week, the international media was  accusing President Trump of  ‘greenhouse gaslighting’ over his environmental claims.

Gaslight is the first mainstage production to open in Australia post-COVID. It is also the first mainstage production to be staged at Adelaide’s newly-rebuilt Her Majesty’s Theatre. The Grote Street façade is all that remains of the grand old lady; inside it’s a lavish new space. And it’s good to see that Adelaide audiences are so excited to be back at the theatre that Gaslight is fully sold out, even with an additional matinee added to the run. Welcome back!