Margaret Leng Tan cuts a figure of elegance, grace and ferocity in this blend of piano, storytelling and projection art.
Sabine Brix 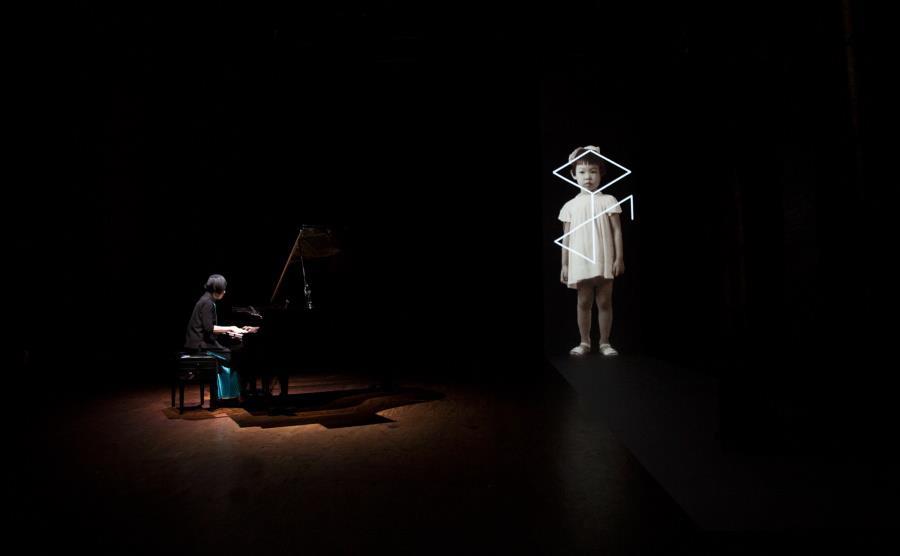 The evening opens with Double Phase, a 25-minute experimental visual exploration intended to consider the complexity of the ‘natural’ world. Filmed entirely on location in Australia, the piece is an evolving visual and sonic journey of the senses. Lawrence English’s composition rumbles and roars along with Makino Takashi’s visuals, which conjure sand-like granules swirling then morphing into gold flecks, and landscapes resembling canefields and rainforests obscured by a force sent to wreak havoc. Sound oscillates as the film changes from colour to black and white, then back again. Somewhere amid the distortion, a heart beats, changing pace in accordance with the intensity of the visuals. Then, calm. The angry thing that throbbed and pulsed underneath the water returns to a state of equilibrium, filling the screen with ethereal light.

Following a 35-minute interval is the main act featuring performer Margaret Leng Tan. You might be forgiven for thinking this wasn’t Tan’s first foray into theatre. The 74-year classical music performer and toy piano virtuoso, along with her team, have created a show which draws on her skills as a pianist while presenting a collage of her life and those who have inspired it through snippets of spoken word and projection art.

A classically trained pianist who left Singapore for New York to study at Juilliard, Tan’s Dragon Ladies Don’t Weep looks at memory, resilience, loss, control and time, examining both her relationships with her mentor John Cage and her mother.

Underpinning the work is Tan’s battle with OCD, in particular her obsession with counting. She begins by circling a grand piano until she counts to 74, her current age. Projections cascade down a wall and onto the floor, often displaying numbers, a link to her internal struggle with control tying the anxiety to music.

The music, composed by collaborator Erik Griswold, is a nod to 20th century minimalism, and is curious, sombre and at times celebratory, synchronous with Tan’s life. She plays with a repetition that is hypnotic. But it’s at the toy piano where she comes alive.

At 74, she cuts a figure of elegance, grace and ferocity behind the 51cm instrument where she possesses a power that’s bewildering. At times simultaneously playing what looks like a melodica, melodies are looped together while Tan walks around the stage playing other instruments which add to the layers of sound.

Her playing is punctuated with anecdotes which are both philosophical, humorous and poignant – storytelling is at the heart of this performance. Her mother’s struggle with dementia opens up a dialogue about memory. As she plays on a toy telephone she jokes about society’s obsession with technology: ‘El Chapo probably wouldn’t be in prison if he didn’t have a cell phone,’ she jokes.

Tan’s affection for John Cage, whose music she has interpreted over many years, is very apparent throughout the piece. The lengths she went to in order to meet him initially are nothing short of inspiring – hiring out a 1000 seat auditorium to perform privately for him after he said he wouldn’t watch a performance in her living room. After their meeting, a 10-year working relationship ensued. Her initial failed attempts to connect with him brushed off with resilience. She quotes Samuel Beckett: ‘Ever tried. Ever failed. No matter. Try again. Fail again. Fail better,’ she said. And it’s obvious that this attitude has sent her in a direction as far away from failure as possible.

A co-production between Chamber Made and CultureLink Singapore, presented as part of the SUBSONIC program curated for Asia TOPA by The SUBSTATION