Inventive puppetry tells a story of environmental collapse in a family-friendly show that ventures into bleak territory.
Richard Watts 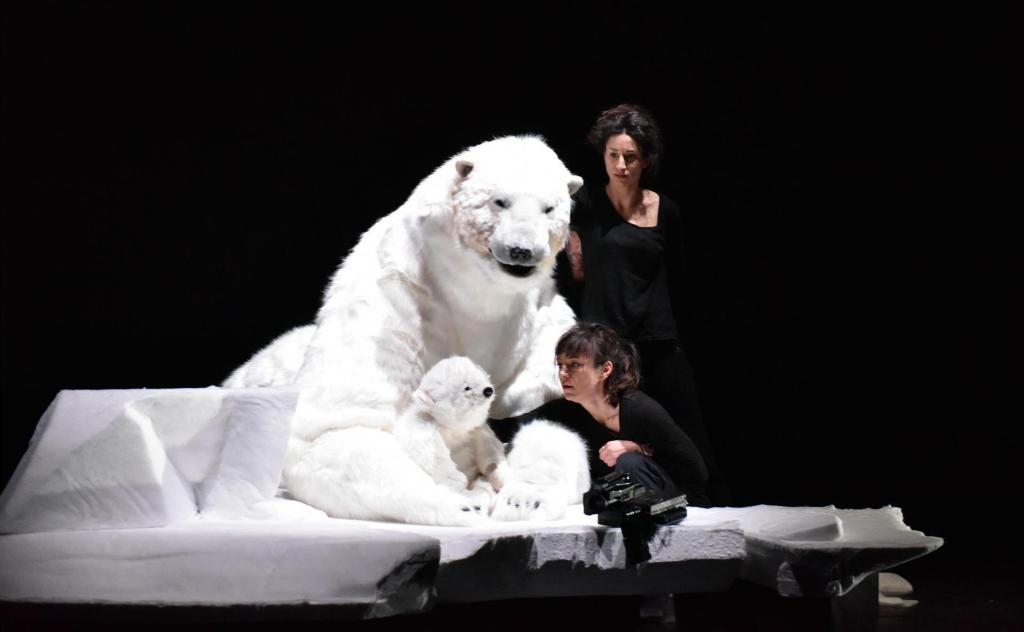 An Adelaide Festival co-commission, Dimanche (the French word for Sunday) utilises puppetry, live performance, video and beautifully executed shifts in scale – from the personal to the environmental, and from miniature to macro – to reveal a planet under threat as climate change runs wild.

Three filmmakers (performers/creators Julie Tenret, Sicaire Durieux and Sandrine Heyraud) set out to capture a vanishing world, only to be caught up in catastrophe as ice cracks and melts, cyclones rage and the oceans rise.

With our protagonists plunged into icy Arctic waters, the scene shifts to show us a polar bear on a fracturing ice floe; the fragmenting ice threatens the bear and its adorable cub, each skilfully made and manipulated puppets whose appearance is one of the highlights of the production. Elsewhere, a stork feeds its chick, only to be snatched away by howling winds. Nor is the damage wrought by the Anthropocene restricted to the natural world; between scenes of wildlife under threat we see how extreme heat and wild weather impact the lives of an ordinary family of three (one of whom, the grandmother, is a beautifully designed and poignantly manipulated puppet whose actions spark both humour and tragedy).

Inventive shifts between small-scale puppetry, landscapes created by both props and the performers’ bodies, and well-integrated video create moments of genuine wonder and delight. As the production opens, a miniature van drives across a snowy landscape; the next moment we are inside the van, watching on the performers manipulate windscreens, the rear vision mirror and a thermos in the cramped interior. Physical humour is successfully employed both in this scene and a subsequent moment on the unstable ice shelf, where the performers climb atop one another in order to avoid standing on the fracturing floe, but even at this early stage there’s a sense that some moments are unnecessarily over-extended, as if the creative team are too enamoured of their own artistry to recognise where cuts need to be made in order to emphasise tension and pathos, and reduce the running time of each subsequent sequence.

This impression only grows as Dimanche unfolds, presenting a kitchen chair and table that melt due to extreme heat, a helicopter in flight (whose illusion is weakened by the lack of a pilot inside its miniature cabin) and a simple but beautifully realised underwater scene in which the black-clad performers’ hands become a school of squid, floating through the flooded world.

At approximately 1 hour 45 minutes, Dimanche (which originated as a 30 minute work at the 2018 Edinburgh Fringe) feels overextended; tightening individual scenes would also heighten the emotional impact of the narrative, which feels frustratingly predictable on too many occasions. All too often we know the direction many of the sequences will take long before they resolve themselves – the staging is inventive but the narrative less so. Conversely, lighting and sound design are strongly executed and humour is employed effectively to counterbalance the narrative’s bleaker aspects.

Dimanche is vividly realised, but a stronger directorial hand and condensed running time would make for a more potent and memorable production.

The writer was a guest of Adelaide Festival.