Technically adept and visually striking, this Belgian production uses miniature sets, live video editing and the performers’ fingers to bring an array of stories to life in an intricate handmade world.
Richard Watts 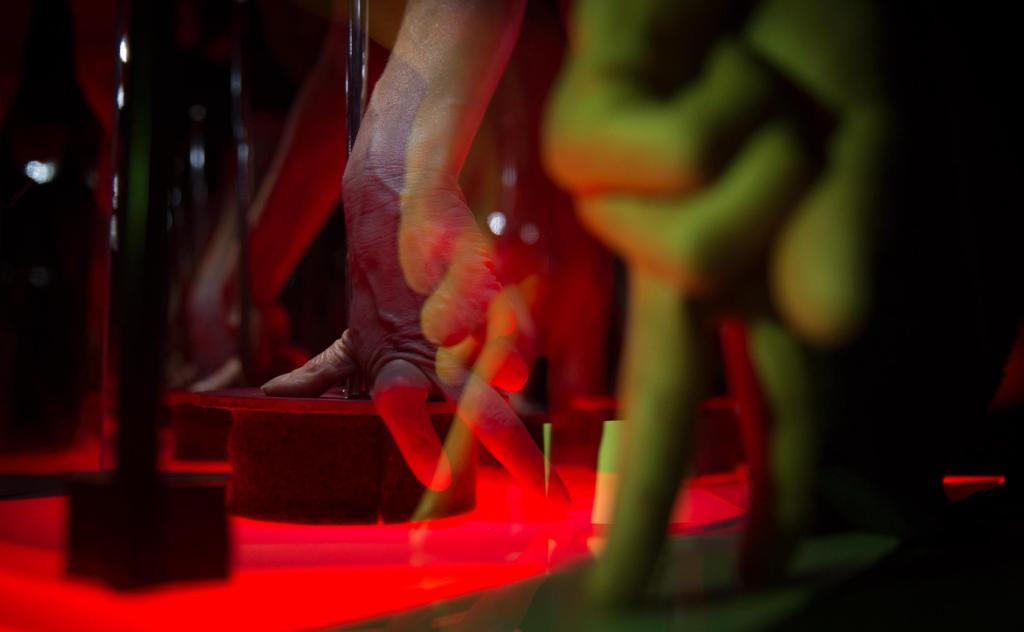 We are not at the theatre, a portentous narrator at the beginning of Belgian production Cold Blood cautions us; we are about to dream. Like a hypnotist whose words count us under, the brief countdown encourages us to experience the subsequent production oneirically – focusing less on the narrative transitions and links between scenes and instead surrendering ourselves to the mood and miniature worlds we are about to delve into.

Cold Blood is part theatre, part cinema. As an array of small and beautiful sets are wheeled in and out of shot, the performers’ hands and fingers become characters experiencing a series of deaths – a plane crash, a man choking on a loose clasp from a bra he undid with his teeth, an asphyxiating astronaut lost in space – with the unfolding drama captured by a series of carefully positioned cameras and vision-mixed live on stage. The audience’s attention shifts constantly between the large screen above the stage, where the finished images are depicted, and the complex dance unfolding below, where artists, cameramen and theatre technicians work their quietly frenetic magic.

The end result, as a series of striking images scroll before our eyes, is unarguably beautiful. Noir-like nighttime streetscapes; war-time bombing raids and burning cities (where red light reflected off rippling water turns smoke into dancing flames); the Aurora Borealis shining above a frozen lake on whose surface a hand dances independently of its shadow; Astaire and Rogers-inspired dance routines in which thimbles become tap shoes on the ends of dancing fingers, and an enchanting Esther Williams-style water ballet are just some of the delights created by the members of Kiss & Cry Collective. But while the production is technically proficient, it lacks the dramatic depth that makes similar works – including Hotel Modern’s Kamp, seen at the 2013 Adelaide Festival – so moving and memorable.

For a production exploring death and mortality, Cold Blood is remarkably emotionless, with the focus on artifice instead of passion. It’s a performance one observes without ever really feeling anything save for admiration at the skill on display. And while exquisitely crafted, its narrative focus is palpably limited, with only one of the stories told from a female perspective (and that being about a cannibal who kills and eats her many male visitors) and all of the vignettes distinctively heteronormative in nature.

But while Cold Blood lives up to its title in terms of being coolly dispassionate, it’s still a remarkably proficient and imaginative production. A scene set at the opera, in which the camera turns away from the miniature stage and the house lights come up just long enough to make the real audience part of show; the flight of a rocket into space and a subsequent 2001: A Space Odyssey homage; the transition from black and white dance sequence to drive-in movie and the bloody death at an automated car wash which follows, are all joyfully executed, beautifully constructed and creatively told.

Cold Blood may lack emotional impact but it’s hard to fault the skills and imagination on display.