A picturesque, experimental production that doesn’t shy away from Lewis Carroll’s darker side.
Dr Diana Carroll 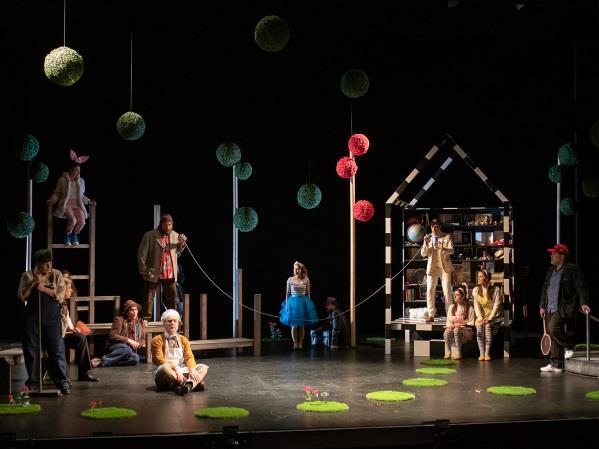 Part of the cast of Boojum!. Photo: Soda Street Production.

The writer Lewis Carroll is most famous for the Alice stories and his epic poem The Hunting of the Snark. This intriguing piece of music theatre mixes the two together and adds some darker details about Carroll’s personal life. The fascinating result is an operatic crypto-fiction cocktail.

Boojum! was written by Peter and Martin Wesley-Smith, twin brothers from Adelaide who are well-known in the local music world. The work was commissioned some 30 years ago by Anthony Steel, director of the Adelaide Festival of Arts, and premiered at the 1986 Festival with the Queen and Prince Philip as guests of honour. The work has since virtually disappeared from the canon and is performed now as the first work in State Opera SA’s ‘Lost Operas of Oz’ series. And what a great choice by artistic director Stuart Maunder as the series’ opening work.

Boojum! is a wonderful piece of performance. Part operetta, part musical theatre, it sits in that more experimental genre of music theatre.

At first glance, it’s a colourful fantasy in which Alice (the fictional character) meets the other characters going on a Snark hunt. But it soon becomes apparent that this is also about Lewis Carroll and his real-life persona, the Rev Charles Dodgson. It’s also about Alice Liddell, the daughter of the college dean who was the real-life inspiration for the Alice in the books. Alice is also played in dual roles, as the young girl and as the grown-up Mrs Hargreaves.

As the work progresses, we see some of the angst of Carroll, the flamboyant author, and Dodgson, the reserved reverend. And there are hints about his personal torments and his penchant for taking photographs of pre-pubescent girls ‘undraped’.

The story and its themes are clearly as relevant today as they ever were. (But please, can we be saved from the seemingly obligatory virtue-signalling of a Trumpian reference in every artistic endeavour?)

Brock Roberts easily steals the show as Lewis Carroll. In a nice touch of synchronicity, Roberts recently directed Alice Through the Opera Glass for Victorian Opera. He has a warm tenor voice and a wonderful stage presence. His more serious alter-ego Dodgson is played with the right amount of gravitas by local opera singer Adam Goodburn. Indeed, most of the cast are local performers and it’s wonderful to see them in this more intimate production.

Katrina Mackenzie is delightful as the young Alice and delivers her songs with a clear, sweet soprano, although curiously she never wears the dress shown on the program’s cover photograph. Joanna McWaters is commanding as Mrs Hargreaves, displaying empathy and complex emotions regarding her role in literary history and the life of Carroll/Dodgson.

The supporting cast, including Jeremy Tatchell, Joshua Rowe, and Catherine Campbell, are all excellent. They are well-supported by a group of young singers from State Opera’s Winter School Ensemble.

Designer Simone Romaniuk has created a fantasy world that is colourful and playful without being fussy. After all, this is the world of the imagination. And director Joseph Mitchell, currently artistic director of the OzAsia Festival in Adelaide, has found the appropriate balance between realism and the absurd.

The musical accompaniment was provided by a talented trio down in the pit. Conductor Warwick Stengårds kept the musicians and singers to a tight reading and wielded his baton with flair. Full marks to pianist Mark Sandon, Sami Butler playing percussion, and Louis Cann on double bass, who gave the score a light, jazzy air, and sounded like more than a trio.

The only problem with this production was the sound. Even though the Dunstan Playhouse is only a small venue, it was almost impossible to hear the words, especially in the singing. This is clearly a problem when the songs carry much of the essential narrative. The singers needed greater projection or some additional amplification for the audience to be fully in the moment with them.

Boojum! was a delightful two-hours of music theatre where nothing is quite what it seems.