Far from static, this grand Verdi opera is full of revenge, massive sets, feuding, and is brought to life with digital projections and live horses on stage.
Gina Fairley 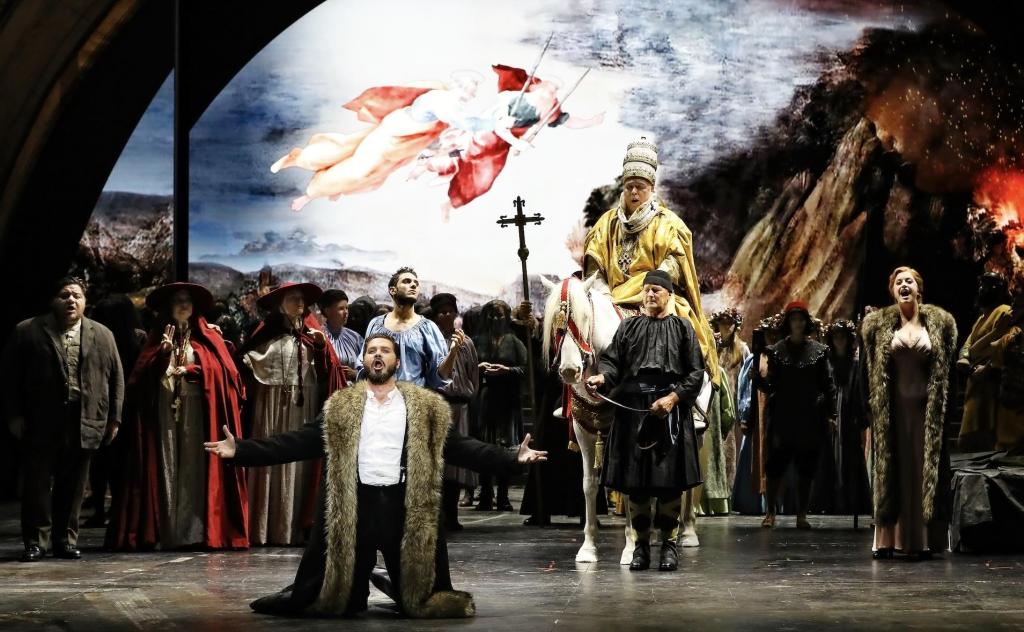 Diego Torre as Foresto, Taras Berezhansky as Attila, Gennadi Dubinsky as Pope Leo I on Frank Sinatra the horse and Natalie Aroyan as Odabella in Opera Australia’s production of Attila. Photo: Prudence Upton.

The invitation to this opera came with a warning: ‘This production contains some violence and people get shot at close range.’  Hang on – isn’t that valid for a good dose of the operas with their smorgasbord of tragic deaths? Please help us if the “nanny state” descends on opera!

While Attila is not everyone’s favourite Verdi opera, this production by Director Davide Livermore can be viewed as the pendulum swing to all things pent up and formulaic that might be ascribed to Attila.

Livermore, along with Conductor Andrea Licata, have breathed life into Attila to make it one of Opera Australia’s more enjoyable productions of the season, not to mention an Australian Premiere and co-production with Italy’s iconic Teatro alla Scala.

Sadly, however, it won’t be enduring. Within days of opening night, Opera Australia was forced to cancel the remainder of its season due to COVID-19. It is all the more reason to share the staging of this production via a review.

In a nutshell, it is the story of Attila the Hun, the ancient nomadic leader who was a significant contributor to Rome’s fall. But warfare is never enough for opera, so of course at the hand of his new wife, Odabella, daughter of the slain revolutionary leader, he is assassinated.

Attila is reliant on its four principals to be able to deliver this opera – and this powerpack did it in doses: Ukrainian bass Taras Berezhansky in the title role Attila; soprano Natalie Aroyan as Odabella; Diego Torre as Foresto and Italian baritone Simone Piazzola as the Roman General Ezio.

Livermore pushes the timeline forward on this tale, setting it within fascist Italy during the 1930s. While he updates on Verdi’s version, the politics are a base line – Attila was always a thinly veiled argument for Italy’s independence from Austria, and echoed Verdi’s passion as a leader in the resurgence against the Austrian empire.

This was bought out in Gio Forma’s impressive sets – weighty, slightly gloomy and reeking with the tensions of a civilisation, they are grand and impressive.

An opera about war could be decidedly static (a criticism often laid on Attila), but Livermore takes another stab at technology working with D-Wok to expand his set using OA’s LED screen. At times this is subtle adding an atmospheric quality, while at others it provides a rich emotional palette, such as the moment when the young Odabella witnesses the murder of her father.

I particularly like the way the screens allows a “painting” to seep into reality on the stage, turning the production into a canvas for storytelling – literally. It works well as Attila wakes to realise his dream, faced by the pope at the gates of Rome. Plus the interpretation of the banquet at Attila’s residence is rightly bizarre as debauchery meets surrealism and Joie de vivre in the wake of war.

The use of live horses on stage, funnily, was the one thing that made this production feel static.

Both Aroyan and Torre made debuts in Attila, which was a big call to cast two of the four principals as “newbies”, but it didn’t raise a ruffle.

Aroyan was impressive as Odabella, confident on stage, dramatically rich in her delivery of the feisty role, and had a voice that continued to give. Her Oh! Nel fuggente nuvolo / O father, is your image not imprinted on the fleeting clouds? in Act 1, where she laments her father is superb.

Her rapport with both Taras Berezhansky as Attila and Torre as Foresto was believable.

Dodging around librettists, Verdi finally selected with Temistocle Solera, whom also wrote his great operas Rigoletto and la Traviata. However, Attila has not been as celebrated as those other collaborations, often described as written for flattened deliveries, where the performer just stands and sings some massive aria – the set and chorus seemingly waiting until their done.

Berezhansky has a presence on stage, and captures the magnanimous character of the great leader. While Torre as Odabella’s betrothed Foresto had a sweetness to his voice, despite his capacity to project and command the stage.

Baritone Simone Piazzola as the Roman General Ezio held his place amongst the three, delivering a solid performance. His Avrai tu l’universo, Resti l’Italia a me / You may have the universe, but let Italy remain mine, was very convincing.

Licata was enigmatic in the pit bringing this score to life, and the Opera Australia Chorus bought presence and depth to the stage.

I loved this opera. It had a great balance of your gutsy traditional genre and yet was animated sufficiently through digital inversions that is held audience across its two and half hour staging – which is a feat for any Opera about war.

Moreso, the principals held this production at a high bar delivering those big notes, with conductor Licata, and kept the energy percolating throughout. I am saddened that more people won’t enjoy its Sydney season.