Review: Are You Ready to Take the Law Into Your Own Hands, Arts House/Asia TOPA (VIC) 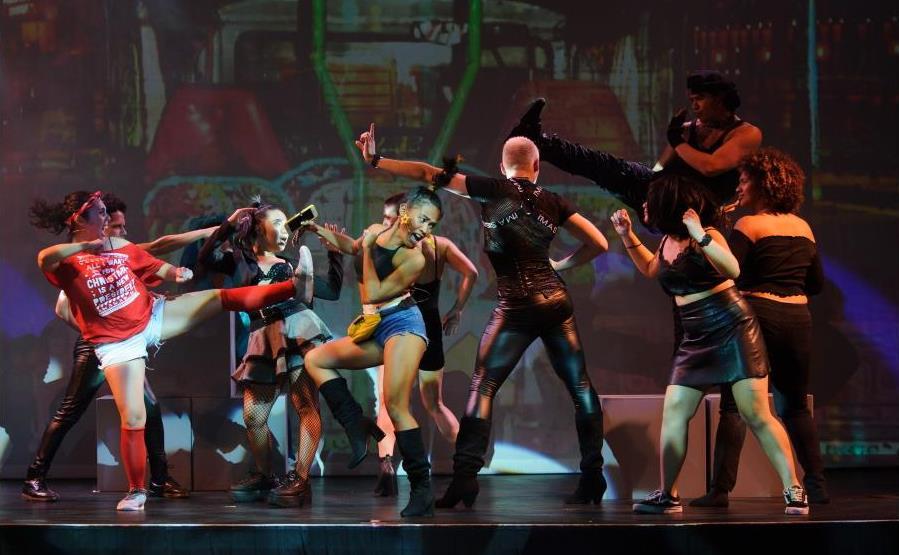 Performers from Sipat Lawin ensemble and members of KIKI House of Dévine during a dance battle in the show. Photo: Sarah Walker.

With stages on three sides of the space and huge projections on each of the four sides, Are You Ready to Take the Law Into Your Own Hands feels like there is someone looking over your shoulder as the audience waits for the show to begin. However, when the lights dim and the warm gold of champagne bubbles fill the screens, as the class-plus dancers hit the stage in front, a new world opens all around. For most of its length, this production is high-energy, music-thumping theatre framed in a cross-cultural delight of Filipino joy and craziness.

Warned by our host that popstars are treated as royalty, the audience meets the biggest diva of the Philippines, Gracielle V, who entertains the crowd before being unceremoniously kidnapped. This is when her biggest fan becomes her would-be rescuer. Selina is somewhat reluctantly joined by her sister, Sanya, and a civic minded police officer, Adriana, whom they pick up along the way. In a chase all over Manilla, the triumphal trio, dressed in nationalistic yellow and red and blue, battle corruption and villainy.

Are You Ready is a fractal offering which is realised with mayhem and a kaleidoscope of satire. The performances are committed and accomplished and, considering the running around that goes on, energetic and exciting. From the first fabulous dance through the concert atmosphere of Gracielle V’s show, to the chase across rooftops and underwater, right until the emotional finale, the work reaches out to the audience with love. That said, there is a section later in the show which does slow down the action. The intent is evident, but some self-indulgence and an over-extension of monologue affects the flow and the audience engagement. But at its most exhilarating, this is enormous fun which requires both seat dancing and an ear for subtle, sharp cynicism.

The audio has Filipino hits and all kinds of other whacks of song. From Les Miz to hymnal, and even a whiff of karaoke montage, the live and recorded music keeps the place rocking. And the dancing is equally thrilling and expertly choreographed for classicism and visual interest. Overall, the production is styled with an absorbing cohesion and detail-upon-detail to enjoy. The three rescuers, and JK the Director, are in constant costume changes within their palette and the lighting is restrained so that colours don’t overwhelm the show. It can, for sure, cut loose, when required, to amp the excitement. However, the most brilliant aspect of the show is the video work. There is some excellent coverage through a hand-held live feed but the technical skill and creativity of the recorded images is completely stunning. Just extraordinary work which, by representation or allusion, can flip the mood in an instant.

But it’s mainly fun here for the sold out crowd of a truly enjoyable production. The Madonna/ Voguing joke alone is worth the price of admission.