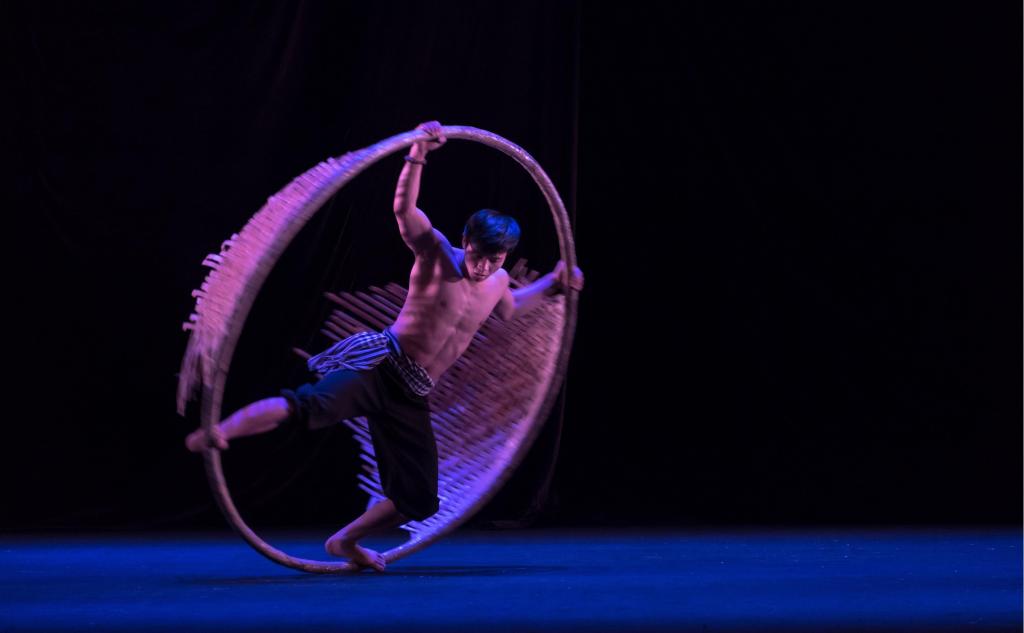 Bamboo is known for being both strong and flexible, and thus it’s perfectly placed to be the leading material used in this Vietnamese production titled À Ố Làng Phố, a hybrid of circus and performance art. Presented as part of the Asia TOPA Festival, the production is as much a showcase of the prismatic nuances of contemporary Vietnamese society as it is about strength and limberness of its 16 young performers. The name translates into ‘village and city’, with the two settings offering a scaffold upon which this show is structured. So many circus acts are presented as mere vehicles of individual skillsets: herald the juggler here, the aerial trapeze artist there – all given five minutes under spotlit scrutiny in their spangly costumes with a vibing soundtrack. This production succeeds in stringing a tale of old and new from beginning to end; there is cohesion in the way it’s been scrupulously storyboarded.

Directed by Tuan Le of Nouveau Cirque Du Vietnam (who’s worked for Cirque du Soleil), À Ố Làng Phố begins under a wan crescent moon with a series of sequences showing what the performers can do with large but humble baskets woven from bamboo. Throughout the brisk 70-minute duration of the show, bamboo sticks and baskets and rattan ware – in various sizes – are utilised in dazzling displays of ingenuity as props upon which the performers jump over, tumble across, fight with, suspend and even pretend to be farmyard animals. The lighting effects, skilful choreography and live traditional music all combine to present poetry in motion with scenes involving fishing and duck farming. This is visual theatre that draws on Vietnam’s pastoral identity but then just as quickly, the scenery changes and transforms into a bustling metropolis as the backdrop for the febrile energy of the dancer-acrobats. There’s a construction site in full production and then tiny apartments where the citizens go through life in stifling proximity to their neighbours. Modern Vietnam means life in close living quarters, with exercise, work, and love all played out with curious witnesses. There is no privacy and yet also, a camaraderie prevails when everyone knows your business.

Motorbikes, street vendors and all the colour and noise of contemporary 21st-century Vietnamese city life are beautifully brought to life, with hip-hop dance also on display as the performers eschew the modest all-black village clothing for bright streetwear and exchange Vietnamese opera for rap.

As a circus, À Ố Làng Phố more than exemplifies the various components of physical prowess (agility, strength, timing, endurance) but what sets it over and above other circus acts is how it embeds Vietnamese cultural life to present original, and startlingly impressive theatre.