A vibrant amalgam of circus and cabaret with some good old-fashioned tongue-in-gill silliness.
Megan Hanson. 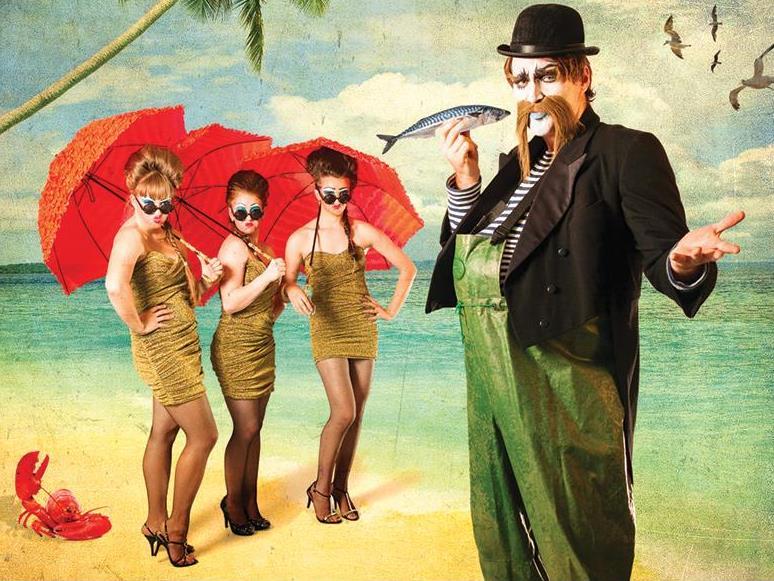 An underwater extravaganza, PESCADO – A Circus Cabaret Fusion is a superb blend of circus, comedy, cabaret and eccentricity. In just 70-minutes the show reaches all ends of the emotional spectrum, from a disco-rock Venice beach party to a poignant drowning scene – with plenty of laughs in between.

PESCADO is performed by the second-year students of Melbourne’s National Institute of Circus Arts (NICA) and directed by the accomplished Hayden Spencer and Carita Farrer Spencer. The only institute of its kind in Australia, NICA produces the best talent in all areas of circus, many of whom go on to pursue exceptional careers both locally and internationally.

Each act is a carefully interwoven expression of an aspect of life in or around the sea, and the circus skill being executed. The commitment to character is impressive, going beyond clever costume and set design, and extending to many performers taking on a personification of their sea-creature character.

Mikayla Adams’ baby whale stand-up sees her spouting off dry puns with excellent deadpan delivery while sporting a huge whale head-piece (a feat in itself). Charlie Rust, the embodiment of a shark (mohawk-fin and all), and Jonathan Morgan’s aerial ‘shark strap’ routine were standouts, as was the four-man fish-juggling club routine (Sundi Pereria, Leigh Rhodes, Ryan Darwin and Hugh Bladel).

PESCADO seems more like a circus show with a bit of cabaret to jazz it up, but musical element just adds to an already entertaining show that’s bursting at the seams with colour, sparkle and pizazz. The synchronised swimming routine is a nice touch, as was Jordan Revell’s Broadway Baby drag solo.

The aforementioned Prawn Stars (Sarah Gray, Tara Silcock and Maxine Gigilotti), a trio of gangly, pouting backup singers who spend much of their time strutting around stage peering over giant sunglasses, make hilarious exaggerated poses while miming operatic tunes. Their presence is a highlight, however their trapeze act is particularly memorable. To have the audience in fits of laughter as they clamber around on a trapeze in super-high heels takes great skill – not to mention oozing with sass and maintaining a trout pout the whole time.

NICA’s Movement studio is a perfect venue for such a show – the large space is filled with the spirit and endless energy of the 20 performers, yet is small enough to maintain an intimate feel.

For a show that’s not without its mild points, but high points that blow them out of the water (‘scuse the pun), PESCADO is a truly unique experience and a great indication of the talent brewing in circus.

Megan is an editor and freelance writer based in Melbourne.