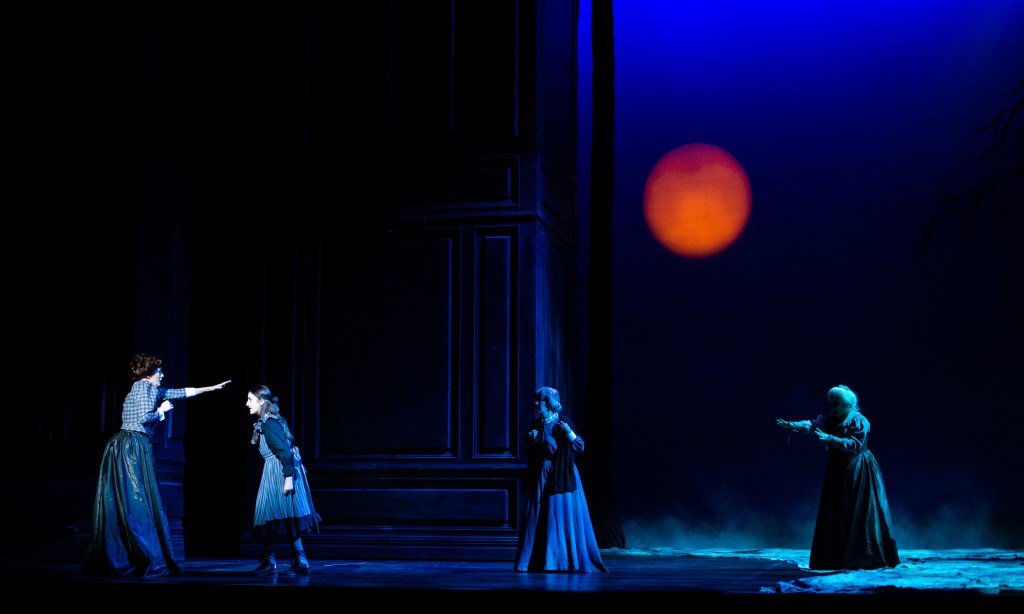 ‘The Turn of the Screw is all about atmosphere, and to this end the staging is superb.’ Photo by Soda Street Productions.

Benjamin Britten’s The Turn of the Screw is an eerie, unnerving work based on the Henry James novella of the same name. At its heart is an uncomfortable ambiguity that is never satisfactorily resolved. Some may find this haunting; others frustrating. From the opening lines of ‘It is a curious tale…’ to the closing line of ‘Peter Quint – you devil’, nothing is quite what it seems.

James wrote the novella at the end of the 1890s, based (curiously!) on a story he was told by the Archbishop of Canterbury. This was the era of ghosts and hauntings, of Spiritualism and table-tapping, of grand gothic tales, and within this milieu, the story is one of tragedy and dark secrets.

Later interpretations gave rise to Freudian explanations of female hysteria and madness. And now, with a cool 21st Century gaze, the implications of child sexual abuse and female subjugation are writ large. It is a credit to director Stuart Maunder that he has stayed true to the storyline and not pandered to political correctness by rethinking it to suit contemporary agendas.

Britten composed the opera in the early 1950s as a commission for the 1954 Venice Biennale with a libretto by Myfwany Piper. It was Piper who had originally suggested he take on the project.

The opera opens with a brief prologue by the narrator to set the scene, sung here by Kanen Breen who later shines as the ghost of Peter Quint. The narrator explains that a new Governess, who is never named, is arriving shortly, to care for the two orphaned children, Miles and Flora. The action takes place at Bly, an imposing manor house set in the Essex countryside. The Governess has been employed by the children’s uncle, their guardian, with strict instructions that she is to care for the children and is never to contact him. This in itself raises questions that are never fully answered. The uncle is not seen in the opera, although he does appear in the classic 1961 film version, The Innocents, played by Michael Redgrave.

The Governess in this new State Opera SA production is acclaimed Australian-American soprano Rachel Durkin, who handles the part with ease. Her tone and clarity never falter even as her mood changes from wide-eyed enthusiasm to disquiet and ultimately dread.

She is joined by Elizabeth Campbell as Mrs Grose, the doughty housekeeper who prefers not to ask the difficult questions. Campbell is a distinguished mezzo-soprano with a vast operatic repertoire and brings a quiet dignity to her role here.

Kanen Breen and Fiona McArdle are both engaging as the ghosts of Bly, recurrent reminders of dark deeds that took place there. Breen excels in being charming and threatening in equal measure, often at the same time. The flaming red wig and Halloween make-up do somewhat undermine his darker side, but his stage presence is superb. And despite my usual apprehension of any professional production involving children (the old acting adage of ‘never perform with children or animals’ is well-founded), Max Junge and Eliza Brill Reed were faultless as Miles and Flora, the two young charges at the heart of the darkness. Together, they are on stage for most of the two-hour production and are exceptionally good, in both their operatic singing and their stagecraft. At just 12 years old, they each have a performance CV that would make many adults proud.

Read: Opera review: The Rise and Fall of the City of Mahagonny

Down in the pit, the 13 musicians from the Adelaide Symphony Orchestra did a sterling job under conductor Paul Kildea, a late replacement for Anthony Hunt. Both are acknowledged in the program notes.

The Turn of the Screw is all about atmosphere, and to this end the staging is superb. The massive set, designed by Roger Kirk, dominates the action and creates the effect of a grand manor house with just a few panels and towering walls. The apparent simplicity of the set, as the panels move to create new spaces, is a marvel. And the delightful conceit of the two children tugging the vast lake onto the stage, and then having to stamp on it to flatten it out, is so assured that only a director of Maunder’s experience would make it work. Trudy Dalgleish also does a fine job as lighting designer, setting the scene and changing the emotional tone with depth and subtlety throughout. It’s impressive what can be achieved with a well-placed shaft of glowing light.

The music, of course, is central to creating that atmosphere, from the twinkling of the children’s nursery rhymes to the foreboding themes that are repeated throughout. And Britten’s score is superb, with musical interludes between each small scene. Relying on the music alone leaves us with a rather one-dimensional sound-scape that would be enhanced with more sound effects. There is a big tree front-of-stage but we never hear it creaking in the wind; and twice-over the large bolt is drawn on the doors of Bly but we don’t hear it clanking into place. A more developed sound world would definitely add to that eerie and haunting atmosphere.

As a fully sung-through opera, with no spoken dialogue, the surtitles are important for the audience to fully grasp what is being said (even though it’s in English). Unfortunately at the Festival Theatre the screen is way up in the gods and is impossible to read without missing the action on stage.

Stuart Maunder has created a production that is restrained and understated, which is not necessarily a criticism. There is space left, both on stage and in the air, which creates the feelings of loneliness, of being abandoned in a grand old manor house. It is a subtle and considered exploration of evil and its consequences.

The Turn of the Screw hasn’t been staged in Adelaide for some 20 years, so this is a great opportunity to see one of the most popular works in the chamber opera repertoire.

The Turn of the Screw
Based on novella by Henry James
State Opera SA, Adelaide Symphony Orchestra
Festival Theatre Adelaide

The Turn of the Screw will be performed until 6 May 2022.