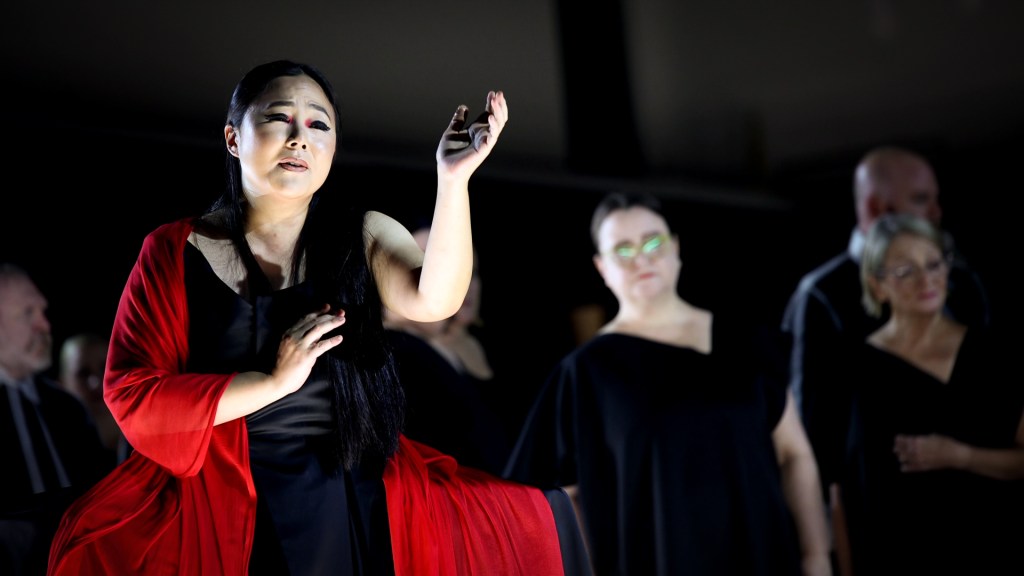 When the going gets tough, opera’s heroines don’t shop, they sing. It’s no secret that women are victimised, ridiculed, murdered, bullied or languish on day beds with terminal illness in operatic storytelling. The mouthier the woman the more she is likely to die a horrible death.

This refreshing, worthy show that’s been conceived and written by Sarah Holland-Batt with insightful direction by Patrick Nolan and Laura Hansford, unspooled the brilliant legacy of women’s voices in the genre’s history from Monteverdi to Finsterer. And the program highlighted the multiple ways spirited heroines are traumatised in operas by Purcell, Mozart and Poulenc.

After a frustrating period of live performances being brutally axed, this show gave a large cast of women, several male soloists including the silver-toned Jose Carbo, and Opera Queensland’s robust, polished chorus, the chance to sing in a gritty mix of intense arias. On show was an intense selection of classics in which plucky heroines put up a helluva fight and don’t mince words.

The arias were connected by drifts of murmured ghostly whispers that functioned as a Greek chorus and linked the 20 arias and choruses together. To be picky, the momentum waxed and waned and dragged in the first half, perhaps because the program of slower-paced arias all peddled gloom and tragedy. Despite the worthy political message, the program still needs to be entertaining too.

One of the strengths was the simplicity of the setting that featured orchestral players on stage, liberated from the pit. The irrepressible Jessica Lethin supported rather than dominated the singers and when the instrumental commentary soared, it wasn’t at the singers’ expense. Stunning video projections added depth, atmosphere and intriguing visual interest. Costume design by Karen Cochet was classy. And to the stage designer’s credit, the concert hall stage didn’t convey an awkward compromise but rather an authentic simplicity.

Eleanor Greenwood as Leonore in Beethoven’s Fidelio could be opera’s answer to pop star Alanis Morrisette. Not vocally, but because of her theatrical flair for delivering white hot spitting rage. Her distinctive lower register complemented a lovely upper range.

Hayley Sugars’ fluid clarity in Purcell’s much-loved lament ‘When I’m Laid in Earth’ with its swirled undertow of scorching pain had appeal and she rocked as Carmen in Bizet’s sassy, man-baiting, ‘Pres des remparts de Seveille.’ Katie Stenzel embodied queenly evil in The Magic Flute’s murderously difficult ‘Der Holle Rache’ and, her admirable execution of the repetitive segments of stabbing staccato were fired like deadly bullets.

Opera Queensland’s exploration of the soprano voice will hopefully inspire librettists and composers to create three-dimensional heroines who are not exclusively defined by their relationship to men. The proud cast on stage humming ‘Coro a bocca chiusa’ from Madame Butterfly was a magical conclusion.

The Sopranos was performed from 29 March to 2 April 2022 at the Concert Hall, QPAC.