Hand to Earth offered an extraordinary insight into the ceremonies of our First Nations peoples.
Suzannah Conway 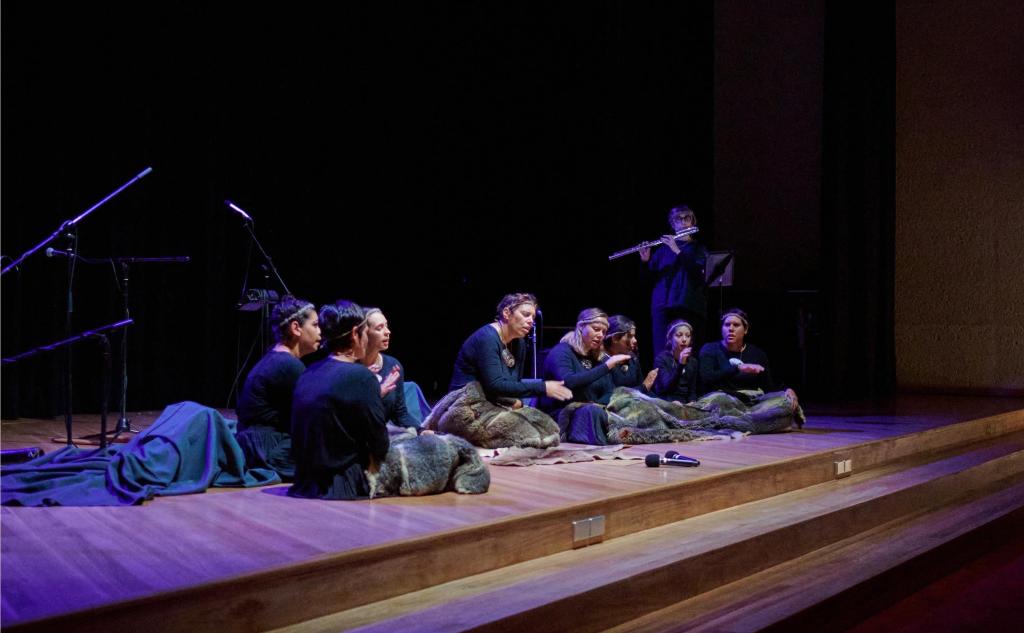 As part of this year’s Canberra International Music Festival, with its concentration on Australian music, composers and artists, a strong component has been the musical heritage contributed by our First Nations people. A number of concerts are being presented that include music and stories from First Nations artists with a few specific concerts that explore certain cultural practices in depth, Hand to Earth being one of them.

The concert was in part a celebration of women’s culture, through the telling of the Possum Song, Yugal Mudhaybaraay, involving women and girls  from Lightning Ridge. It was followed by a work created by Ngukurr Songmen Daniel and David Wilfred, the keepers of Yolgnu manikay (songs) from south east Arnhem Land, in a joint development with members of the Australian Art Orchestra. Both works in different ways were immensely powerful, couched within their deeply rooted cultural practices with impressive outcomes.

Yuwaalaraay women traditionally create a cloak of possum skins with the ceremonial garment taking on a life of its own as a work of living art: the music itself. The process was marvellous to watch as it helps to inform their performance practice. A ceremony of seven women and two girls, representing all women, and accompanied by a narrator/musician, took their positions. Draped by the possum skins, sitting cross-legged on the floor, with evocative bird sounds and the ethereal sonority of the flute, the women chanted and sang, kept time and rhythm and imparted their story.  It was both hypnotic and engaging. From time to time they were urged on by the narrator to listen to the song of the possum, a creature seen as a symbol of communities staying together. The rhythm of the beat was repetitive, gradually increasing in sonority and speed, until the ceremony was finished with a sudden stop. The skins were then displayed. It was a moving and quite beautiful ceremony, and is clearly still a continuing practice in their culture.

Hand to Earth was developed through an Australian Art Orchestra residency, leading to a collaboration between Songmen Daniel and David Wilfrid; the orchestra’s soprano, Sunny Kim; Artistic Director, trumpeter and electronic musician, Peter Knight, and clarinetist Aviva Endean. The achievement of the musicians in bringing all these elements together, so successfully and with such passion, was extraordinary. A blending of cultures, of the oldest on earth with new technologies, of the didgeridoo with clarinets and a trumpet, of a female voice with an Arnhem Land Songman, these were managed with aplomb around a palette of contemporary and traditional music. And the stories, based around a series of traditional manakay (songs) of the land and animals, of wild buffalo looking for fresh water, also included a flower song for the female voice.

Daniel Wilfrid’s haunting vocalisations, sung in language to the strong rhythmic beat of the clapping sticks, while David Wilfrid accompanied with a dark, throbbing, didgeridoo was mesmerising. Aviva Endean played a range of wind instruments to produce effects of wind and noise, as well as accompanying on clarinet and bass clarinet. Peter Knight’s trumpet varied from a high-pitched  metallic soundscape to gentle, sweet whispering, while he also added electronic sounds to create noises of the bush. Sunny Kim’s ability to both contrast and match her expressive soprano, in English and Korean, alongside Daniel’s language as Songman, worked extremely well.

It was a privilege to participate as an audience member in this very special musical event, to glean an insight into the extraordinary 40,000 year history of our land, while also learning more about the culture and ceremonies of our First Nations people. Rarely do we get such opportunities of cultural involvement and it is generous of these artists to share their stories and history. Much credit should also be given to this festival and to its Artistic Director, Roland Peelman, for having the foresight to present creative work of such quality and relevance at this time in our history.