A joyous celebration of one hundred years of the piano trio.
Dr Diana Carroll 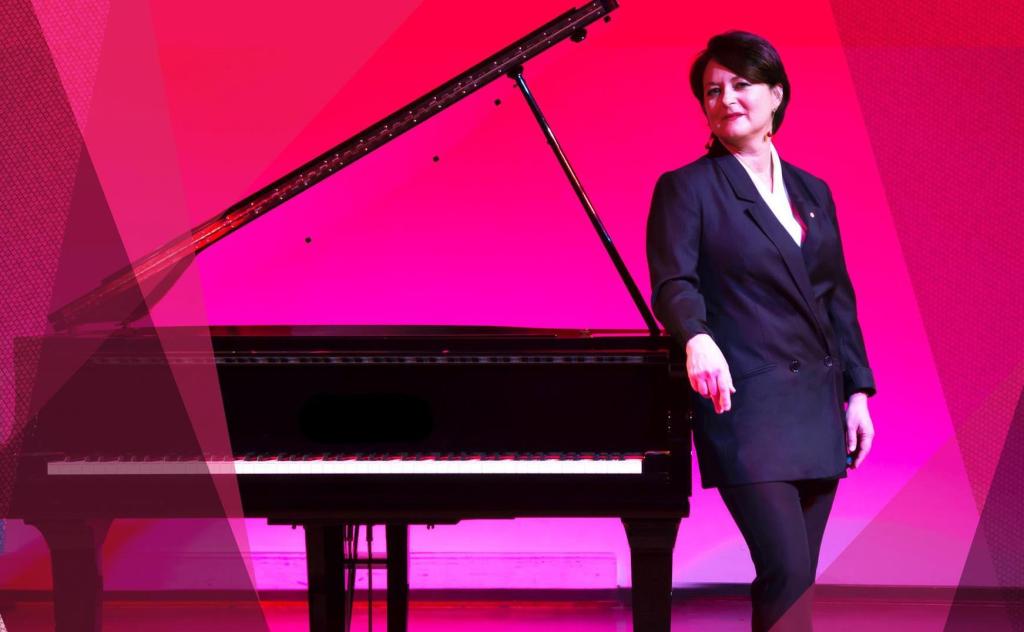 Almost exactly a year after their last Adelaide performance, Selby & Friends were welcomed back to Elder Hall by a small but enthusiastic audience. This is the perfect setting for chamber music with its aged wood-panelled ceiling and air of faded  grandeur.

On this occasion, Kathryn Selby was joined by Julian Smiles on cello and Susie Park on violin for a program celebrating the piano trio in its various forms.

‘One of the delights of a Selby & Friends performance is these brief commentaries from Selby and her friends, the guest musicians of the day.’

Opening without any preliminaries, and curiously beginning 15 minutes ahead of the programmed starting time, the musicians began with a delightful rendition of Circulo by Joaquín Turina. Written in 1942, and comprising three brief fantasias, this piece evokes the sounds of a traditional day in Spain. I confess the hints of bullfights, siestas, and flamencos were a little lost to me, but the overall effect was still sunny and charming. Circulo celebrates the composer’s Andalusian heritage, said Selby in her remarks, and is one of her favourite pieces to play.

One of the delights of a Selby & Friends performance is these brief commentaries from Selby and her friends, the guest musicians of the day. They give the concerts an intimacy that you don’t get in a more traditional orchestral performance and allow the players to share their musical knowledge and particular passions.

Next came Three Nocturnes by Swiss composer Ernest Bloch. These musical miniatures were written soon after Bloch moved to the United States in the early 1920s and are full of optimism and energy. There is a timorous modernism to these small but well-crafted pieces that makes them well worth another listen.

Introducing the  Piano Trio No 1 by Shostakovich, Julian Smiles admitted to a slight ‘frisson of fear’ for the players as this was the first concert performance of these works played together.

‘It’s very different playing in concert to in rehearsal,’ he admitted. But they need not have worried – their performances were warm and generous and very much appreciated by the audience.  Any slight hesitancy or musical emphasis left unspoken did not diminish the performance.

Dmitri Shostakovich was just 16 years old when he wrote this short, single-movement piano trio in 1923 and it is, indeed, a portrait of the composer as a young man – undoubtedly an astonishingly talented young man.

After the interval it was a journey back in time to 1827 for the highlight work, the Piano Trio No 1,  by Franz Schubert. Speaking a little tearfully, Kathryn Selby said this work was dedicated to her father who had passed away just a few days earlier.

‘Selby, Smiles, and Park worked together beautifully, from the delicate emotionality of the second  movement to the dramatic presto of the fourth that seems to appear out of nowhere.’

Schubert composed the Trio in the last year of his life, and even though he died at just 31 years old his musical legacy is vast with over 1,100 known works.  This is comprised of four movements and Selby, Smiles, and Park worked together beautifully, from the delicate emotionality of the second  movement to the dramatic presto of the fourth that seems to appear out of nowhere.

The composer Robert Schumann once said that ‘Schubert’s pencil was dipped in moonbeams and in the flame of the sun.’  The Selby & Friends audience appreciated just a touch that magic in this dramatic concert finale.