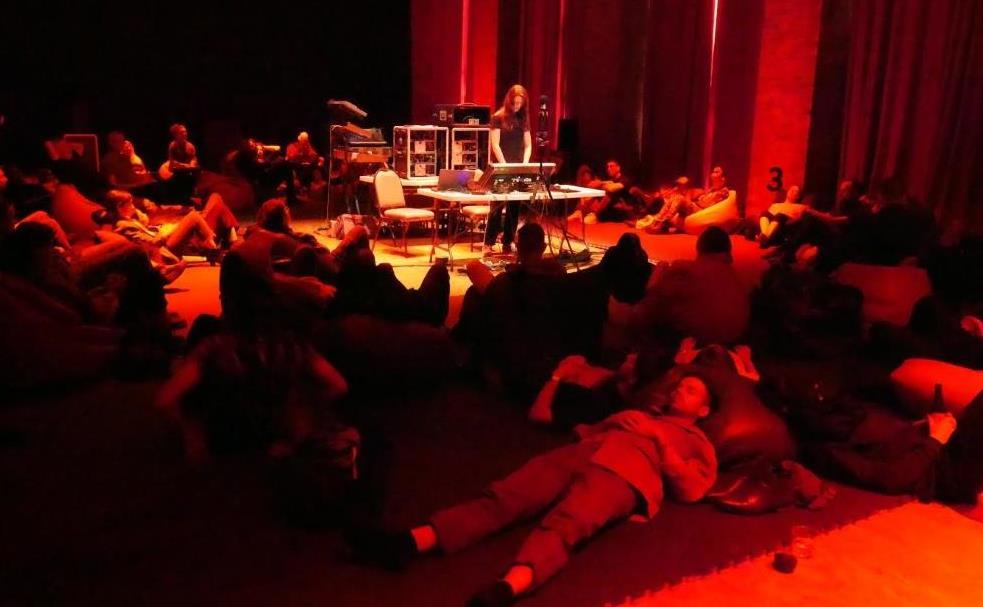 There’s something slightly relieving about going to an electronic music performance that starts at 7pm, has beanbags strewn across the floor and punters still in control of their faculties. Maybe I am showing my age?

When MESS say their commissions ‘will allow audiences to experience the expansive range of electronic sound that is created in Australia in an environment conducive to deep immersive listening,’ they’re not lying.

The work of Rosalind Hall and Steve Law (Zen Paradox) fits perfectly into the Substation and the atmosphere created by MESS. There wasn’t much visual stimulus, which forced the audience to do nothing but listen.

Positioned towards the back and centre of the room, I was immersed in Hall’s sound but not able to see much. Lights were dimmed so the emphasis was purely on the rich soundscapes she was creating and not what was going on behind the console, which can often take away from the simplicity of enjoyment when you’re busy trying to figure out what an artist is doing. Hall’s 30-minute set was a cinematic journey, lending itself to deep imagination. I saw forests, canyons and vast spaces when I closed my eyes. Her layered sound was hypnotic with most people zoning out to take pleasure in the sound. There was a dark, almost-gothic quality to her set, with the addition of bells drenched in reverb taking the journey towards a mystical end.

Part of MESS’s remit is to support and expose the significant culture of electronic sound that exists in Australia as well as to present unheard work that has been created in the Australia since the late 1960s. MESS cofounder Robin Fox managed to dig up some magic when he re-played some of the idents created on the iconic Synthi 100 that were used for news stings and programs such as Bill Collins’ Midday Movie, which tells you how old they were. When you consider how complex the Synthi 100, an analogue synthesizer, is to get sound out of it really allows you to appreciate the compositions, which were well ahead of their time.

Fox also unleashed an epic piece of music by his late mother Cindy Johns who was a mainframe computer musician in the 80s. You can start to see how his family lineage influenced his career choice – his stepfather also ran the computer music department at La Trobe University.

Johns’ composition Disarray is about as electronic as you can get – an 8-minute piece of music with beeps and bleeps that builds to a chaotic crescendo reminiscent of Star Wars’ droid R2D2, perhaps a homage to composer Ben Burtt’s sound creation on the ARP 2600? Or maybe it was he who was inspired by her?

Lastly, Steve Law capped off the evening with an epic performance which lasted for about an hour. His set up looked insane with instruments ranging from a Korg MS20 to a bunch of other synths and modulars. He began on the laptop and synths working his way towards the modular set up.

What began in a chilled out manner, with birds chirping and ethereal-sounding pads became increasingly intense, making use of surrounding speakers with pops, cracks, and broken glass coming from every single direction. A kick drum then slowly built to make way for a pumping bassline reminiscent of the works of one of Law’s music aliases, Mr Suspicious, a force in underground rave culture in the early 2000s that I always used to look forward to seeing live.

The set eventually wound down with Law patching cables from his modular synths to make a variety of sounds that could have been the backdrop to either a Super Mario Bros game or an intensive care unit.

When I asked my friend what she thought, she said his set had triggered an acid flashback.