Meow Meow’s Little Mermaid is light and bubbly but it also dives below the surface just deep enough.
Kyle Walmsley
[This is archived content and may not display in the originally intended format.] 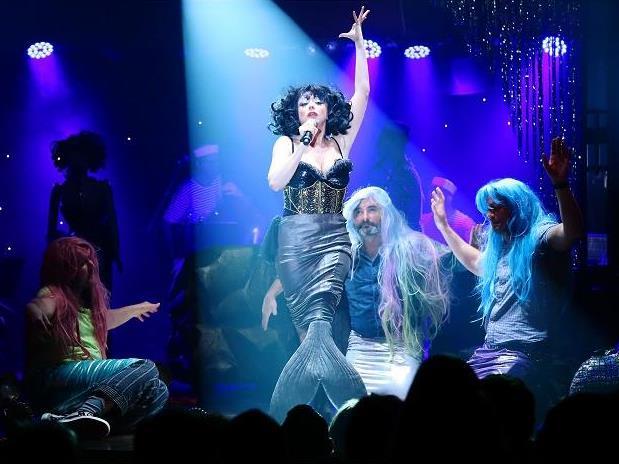 The world premiere of Meow Meow’s Little Mermaid, as you may have guessed just from knowing anything more than nothing about Meow Meow and her previous work, does not include Jamaican crabs, sea witches, or silent princesses. In fact, the show spends almost no time dwelling even on Hans Christian Anderson’s original tale. What you do get though, is a hilarious, brassy, and surprisingly poetic exploration of the search for hope, and what we sacrifice for love.

The inimitable Meow Meow is accompanied by a brassy ensemble of sailor-uniformed talents playing keyboard, doubles bass, sousaphone, cello and accordion. The ensemble are on pulse for the whole show. A show where they get not a moment to relax.

Our Mermaid is on a quest for love. She is tired and downtrodden at the opening – washed up. She’s lost hope that she’ll ever find her true love, unsure if there’s even such a thing and desperately trying to convince herself not to give up hope all together.

Over the course of the night we get to see Meow Meow in her full glory – she holds nothing back, and you can’t help but shuffle out of this show smiling. Like your teenage crush, Meow Meow has put together a 70 minute mix tape for you (with commentary) including some classics, some completely reimagined covers (a spectacularly absorbing one in particular of Black’s Wonderful Life), and a few new tunes you’ll probably be into. Overall, it is a playlist that’ll leave you in no doubt of her intentions to win you over.

It works. You will fall in love with Meow Meow during this show if you haven’t already. The songs are frequent and the moments in between are equally engaging, including deftly handled audience interaction and brilliantly funny dialogue. The show leaves no potential for laughs unexplored – slapstick, innuendo aplenty, but balancing this is a sophisticated self-awareness and an equally fearless approach to the dark and the emotional. A credit to Meow Meow’s supple skills is in the moments of shock, and absurdity that turn on their heads in a beat to moments of poetry and depth.

The inclusion of Chris Ryan’s character happens a little clumsily, aiming to use a bit of trickery and misdirection in order to introduce him into the story. This clumsiness is quickly forgiven and accepted as part of Meow Meow’s endearing approach that is her trademark kind of all-knowing buffoonery. Ryan meets Meow Meow well with a standout voice in his own right.

Thick with its aquatic theme, the highlights of this show for me include a dolphin vocal solo, her fearless immersion into the audience (literally), and the impeccable costumes.

While the Spiegeltent venues are beautiful to look at and house world class acts at Arts Festivals the world round, they can actually be annoying to sit through a whole show in. They have lots of partially obstructed viewing points and odd audience seating angles. My tip is to get there early to get a good seat. In saying this it takes something incredible to make you forget where you are and get lost in this venue. Not only is Meow Meow’s The Little Mermaid light and hilarious fun but it also dives below the surface just deep enough to make it substantial.