I went to the Melbourne International Comedy Festival's CJ Jenkins is a Freakshow expecting some sort of zany burlesque. I was, however, surprised to find that it is actually a candid, funny and moving one woman show, with CJ playing herself, telling stories about her upbringing and her disability.
Samantha Wilson 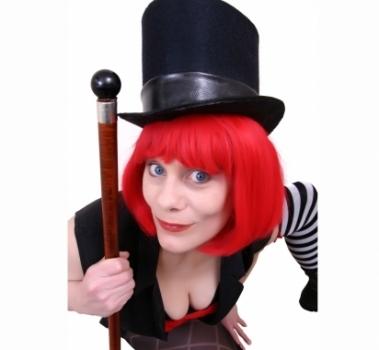 I went to CJ Jenkins is a Freakshow expecting some sort of zany burlesque. I was, however, surprised to find that it is actually a candid, funny and moving one woman show, with CJ playing herself, telling stories about her upbringing and her disability.

Host of Channel 31’s The Comic Box, with extensive experience in Melbourne’s comedy scene, the pink-haired CJ Jenkins initially presents herself as the all singing, all dancing variety performer, entering the echoey gallery space of Dante’s upstairs, twirling her walking stick to circus music blaring out of a tinny portable stereo. However this small performance at the start is used to set up for the central show, CJ under a single light, sitting in a chair, telling us stories from her life. She sits as close to the audience as possible, squaring each member with a straight stare. Her story may not be pretty, but it has to be honest and funny.

Born with cerebal palsy and spina bifida, CJ has in recent years developed rheumatoid arthritis. She tells us what it was like to be the first disabled child in Victoria to attend a ‘normal’ school: the taunts of the bullies, the inability to play like the other kids played. She instead had to make her own fun. A child who fell over a lot, for example, she describes the science behind falling over in hilarious detail.

Moving on to her family, she describes what it was like to live with her homosexual drug taking father and mentally unstable religious zealot of a mother, who, after turning to the Pentacostal church, came to believe that CJ could be ‘cured’ through exorcism and speaking in tongues. This whole section is hilarious in its absurdity, but equally heart breaking.

CJ Jenkins is a Freakshow is hilarious and vulnerable and incredibly well performed because this is Jenkins performing as herself, presenting a painful life in progress in all its absurdity. One moment she has you dancing along with her, another you are moved almost to tears, all because she is letting you into a very intimate story that she has made very very funny. The glibness that seems to be required of the Comedy Festival guide simply does not reflect the complexity and beauty of this show.

Melbourne International Comedy Festival: CJ Jenkins is a Freakshow
Tuedays, Thursdays and Saturdays at Dante’s in Fitzroy until the 25th of April

Samantha Wilson is a freelance writer and poet. She also co-founded SNAFU Theatre, and has directed all eight of its productions, including Month of Sundays (2007), The Beginning of the End (2008), and both the Melbourne and Edinburgh Fringe seasons of Murder at Warrabah House (2011).