Locust Jones: A Week in the Life of the World

A stream of consciousness turns the gallery into a ticker-tape news commentary that stimulates the viewer on many levels.
Gina Fairley
[This is archived content and may not display in the originally intended format.] 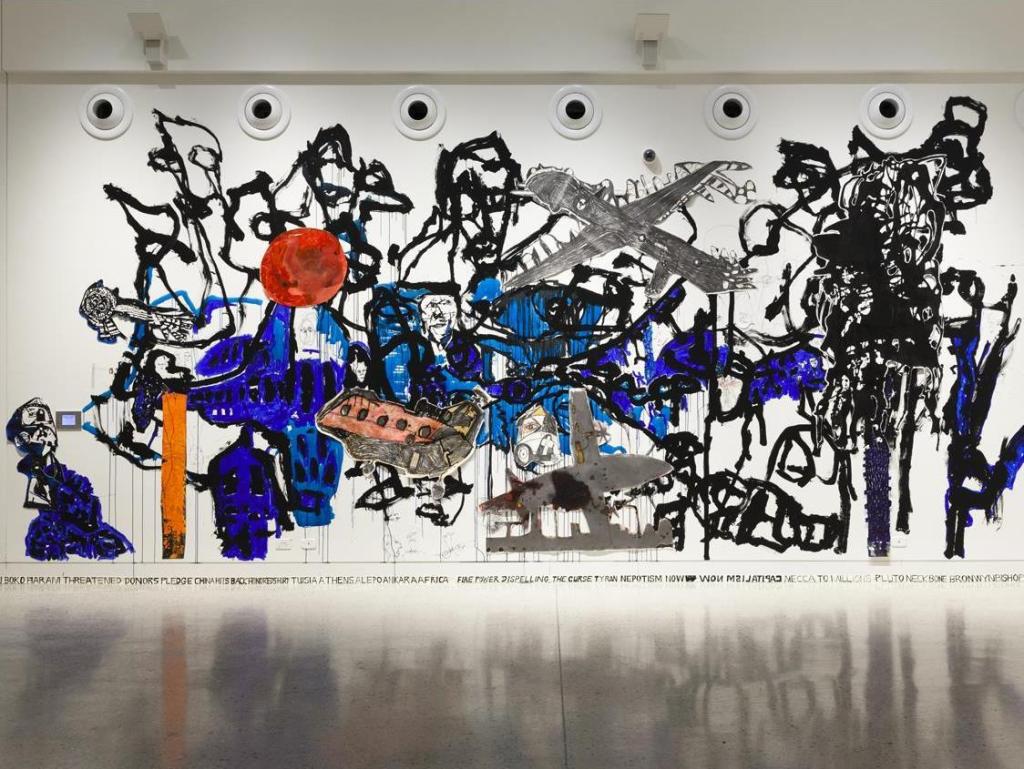 It is a rare and rewarding moment to stumble across an exhibition that is as cohesively considered as this, not only in its making but its presentation within the gallery space.

Locust Jones: A Week in the Life of the World takes its title from The Guardian, a newspaper that Jones reads daily with a kind of religious zeal. Its headlines, phrases and permeations settle across the gallery with a noisy, insistent chatter – cut up fragments of quotes that graphically, and structurally, pick up on the zeitgeist of global chaos.

This ‘noise’ is not the only heartbeat to this exhibition. The sense of hand, of gesture, movement and making that flows in a subconscious stream pulses with its own energy that has nothing to do with news.

The layers and levels on which the viewer can engage with this exhibition are many.

While some reference has been made to a sympathy with the German Expressionist movement, this show is uniquely Jones and has a strength of its own identity and mark.

Walking into the gallery visitors are faced with a vertical drawing articulating the space with a fresh approach. It spills onto the floor – seemingly unstoppable – gushing in its graphic verbiage.  To walk up and around, to look down and into, to have this scroll baring down on you, captures the barrage of the media and the physical interruption it can have in our lives.

It is more subtly played out through a ticker-tape skirting board, running around the gallery like a hand-written news-feed. While it does not cause a visual interruption to the hung works, its presence has a persistence that cuts to the very heart of this exhibition in its drone of daily news commentary.

Jones explained in a statement: ‘The first thing I do when I wake up in the morning is turn on the radio, then the internet – Al Jazeera followed by other world mass media internet sites. I listen to stock market quotes, financial information, reports on who has died, what plane has crashed, what politician has been assassinated, what climate change disaster is coming, endangered species and nuclear accidents…

‘I stand next to a wall scribbling down all the facts and figures on cupboard doors in the kitchen while I wait for my coffee to brew. All this information is channeled into my drawings and paintings. I then go out and buy the current newspapers…I have the radio on or live web stream from Al Jazeera while I work. I am permanently plugged into the chaos of the day.’

A further highlight of this exhibition was a piece Jones made in the space, painting direct to the wall. Simply titled Wall Drawing (2015) (pictured top), the looseness of Jones’ gesture and mark making stomps out in confident expanse over several meters, and is overlaid with collaged elements.

It moves between the bold and the intimate; pulling the viewer in but then repelling them to ‘read’ the work, forcing consideration.

Across it is an image we see often in Jones’ work, and in particular this exhibition, the plane.

Among the global events of the past twelve months that have informed this exhibition were the German Wings airplane crash in the French Alps, the Malaysia Airlines Flight 370, which disappeared on 8 April 2014, and the increasing surveillance of drones, both in the public and private space.

It connects with a stealth-like form that hovers central to the gallery over a ceramic skyline.

The proximity of the drone-form to the viewer is threatening, predatory and bodily engaging – confusing reality with perception. We have vague understanding of drones (constructed largely by what the media tells us) but do we really know how they sit in relation to our being. Jones plays out this intimidation.

Constructed in a papier machê technique from local newspapers, its looming presence over a cluster of ceramic towers plays with memory and fragility of the material.

Jones has been drawing these structures since the 9/11 tragedy, towers of power that can be toppled. They can been seen repeated around the room.

This ceramic version, in a new move, pushes that drawn element into a 3D consideration. It is in sync with a resurgent trend for the ceramic material, punching out of its traditional craft boundaries into a broader experimental arena.

Jones’ continues his signature mark making, scoring into the clay; his palette also uncompromising to the material’s tradition.

It is a strong body of work both in content and its graphic handling by Jones. And, unlike this constant news cycle, quickly forgotten, Locust Jones’ exhibition will have permanence.

It is example, again, of the regional gallery sector in delivering solid survey and solo exhibitions by mid-career artists, overlooked by our state institutions. The New Zealand-born Jones is a local to the Blue Mountains.

Locust Jones: A Week in the Life of the World is a must see.

Locust Jones: A Week in the Life of the World