Handa’s Madama Butterfly opens with the bravado of a rising sun and cocktail flair in a spirited update of Puccini’s opera.
Gina Fairley 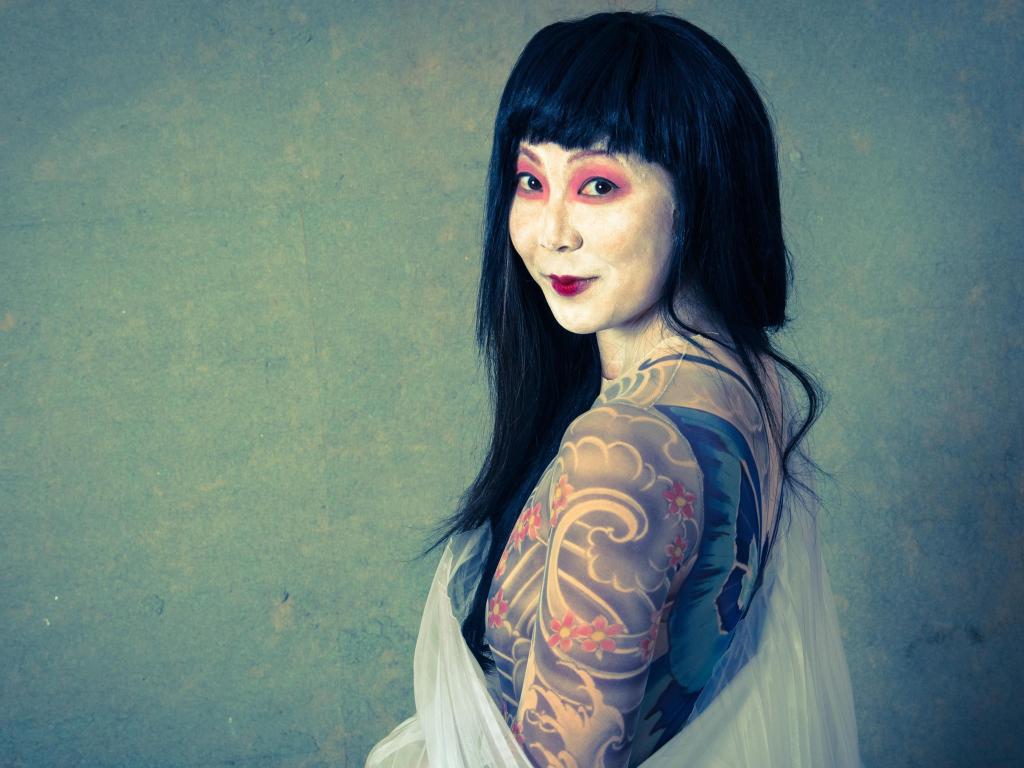 Handa’s Opera on the Harbour, or HOSH as those in the business know it, returns for its third and potentially final edition, following La Traviata in 2012 and last year’s less successful production of Carmen.

Expectations were again high, and the Spanish company La Fura dels Baus under director Àlex Ollé delivered in Technicolor spectacular, amped up at every level.

First impressions cast a mood for the night. And, if we were to review this production on those alone, Eamon D’Arcy’s site design was the perfect marriage to Alfons Flores’ sets, which carry the fantasy of this landscape forward onto the stage, blurring contemporary and traditional narratives.

Approaching this patch of harbourside property, one enters a world of Japanese gateways, lantern lit pathways, bamboo bars, and floating fan terraces created by D’Archy, stacked and sprawling along the harbour’s edge. It is a visual feast.

Landfall is annexed by a less-than traditional stage – or pontoon for that matter – as miles of astro turf rise in a simulated hill challenging the city’s skyline beyond. It is the perfect conversation for Ollé’s retake on Butterfly, where B.F. Pinkerton is cast as a property magnate; his wealth and arrogance in this role has a contemporary relevance that is as believable as Puccini’s original derivation as a naval captain.

Furthermore, it has an uncanny currency with Sydney’s recent development of another harbor site, Barangaroo. But I am getting ahead of myself here. That is the depth and excitement of this production. Taking your seat among the 3,000 bleachers – which feels surprisingly intimate despite the open environment – a surveyor holds the stage marking out Pinkerton’s future development.

A minivan with hazard lights flashing arrives harbourside as the crowd hushes. Its team of caterers busy themselves turning the hill into a playground for Pinkerton’s wedding to Butterfly, their white coats and hygiene facemasks signaling this will be like no other version of the opera.

Likewise Goro becomes Pinkerton’s architect and Butterfly’s uncle The Bonze is a yakuza gangster. They are bold translations of Puccini’s opera by the La Fura dels Baus team, and yet maintain the integrity of the opera superbly.

While not everyone’s image of Butterfly, it sat well with the misguided zeal and decay of Flores’ set for Act II.

If you don’t want to drain your bank account with those intermission cocktails, stay in your seat and watch the flip of Acts as this pontoon garden becomes a derelict construction site – literally built by two cranes in the half hour.

I even heard one punter reading it as the residual of soured developments by the GFC. Regardless, it is the familiar picture of concrete carcasses we see across many Asian cities, caught between the promise of Western dream and failed aspiration.

With a similar bleak tone, Puccini’s Humming Chorus of the Second Act moves across this stage like homeless or transient dwellers, or, dare we add, unexpected maritime arrivals, ushered out of sight as quickly as they appeared. One criticism it that the Chorus was largely under utilized in this production, kept out of sight, their voices lost to over amplification.

Whatever one may think of this set, it does cast a mood in keeping with Puccini’s tragedy.

Despite spectacular, when we are ‘talking Opera’ the big question will always remain: ‘How was the singing?’

Japanese soprano Hiromi Omura stole the show as Cio-Cio-San, or Butterfly. One of Opera’s most demanding roles, her acting carried the emotion of her song, cutting through the night with remarkable passion and strength. She was rewarded with a standing ovation on opening night.

Russian tenor Georgy Vasiliev captured Ollé’s vision of Pinkerton as a ruthless property tycoon and yet conveyed a warmth and rapport with Omura that was palpable. Their Act I love duet, under the much-hyped rising moon floated offset, delivered the spectacle that gives opera its name.

The greater problem was the ‘boosted’ sound, a bit boxy and booming, which missed the texture of Puccini’s opera at times. It is a hard call. Last year HOSH was criticised for the sound being too soft; and opening night had strong winds to contend with – which I should add were not picked up by the singers’ microphones. Overall, Sound Designer Tony David Cray managed to control the live and fluid outdoor venue, and the criticism of opening night could be easily fixed by hitting the volume dial.

While we complain about the wind on one hand, it created magic with the other. The use of fabric across the production – Butterfly’s costume, bolts of red fabric that danced over the wedding party, and laundry recklessly flapping in a desperate environment – animated the stage within this vast outdoor location, training the eye back onstage.

The spectacular harbour location was always present. Fireworks were the unstated mandatory element for this Sydney production. And with cars, boats, taxis, and cranes flying in and off of set, this was no ordinary opera. Could there have been more? The arrival of the ‘humming chorus’ by boat would have added a contemporary Australian tone.

Ollé has tried to push the boundaries of this location to its max. Was all achieved, then, it terms of our expectations of a Madama Butterfly production? You can only conclude a resounding yes! While the cynics may say it has a Disney-quality, cleverly massaging the popular and spectacular, this production maintains its integrity and its vocal benchmark. The Handa Opera on Sydney Harbour series was designed to bring new audiences to opera in the light of dwindling audiences globally. It has proven to be a success.

Yes, it’s radio-miked, amplified, updated, and has fireworks … but that larger-than-life experience is delivered superbly. I have seen Butterfly many times and I can confidently say this production is one not to be missed.