Australian Dance Theatre’s latest work, the first in 'The Nature Series', examines our domestic arrangements.
Richard Watts
[This is archived content and may not display in the originally intended format.] 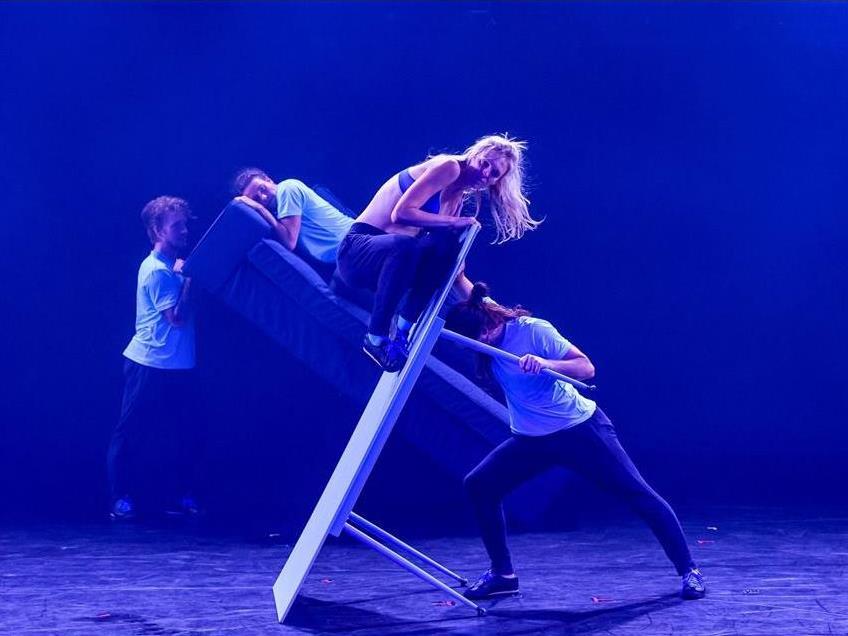 Premiering at this year’s Adelaide Festival of Arts, Australian Dance Theatre’s Habitus is the first in a new series of works entitled The Nature Series and exploring our connection with the Earth, or lack thereof.

Here, choreographer Garry Stewart and the company he has led for 17-years examine our domestic arrangements, dancing with books and ironing boards, tumbling over couches, and discussing planned obsolescence while surrounded by the detritus of modern life.

From its opening scene, in which a package wrapped in brown paper abruptly falls from above as if delivered by Amazon-drone, to reveal – once is it finally opened – a blue garment, ludicrously worn, there’s a strong element of comedy present in the work. There are fart jokes, and coquettish smiles from men who balance books on their heads as if in a gender-swapped deportment class, but slowly, a darker undercurrent emerges.

A couch tilts and rises like a mountain as a dancer carefully and precariously balances upon its tipping flank. As dancers open ironing boards, unfolding metal legs and swinging them about, a man moves a woman’s body through identical poses, manipulating her body like a doll and powerfully evoking the ugly sense of ownership some men feel over their partners.

Books are flung furiously in a weapon of words. A man struggles to separate a knotted-together couple, as if physically intervening in a lovers’ quarrel.

Near the end of the work, a figure perches like a prophet upon the piled furniture, and a vast drop-cloth is drawn across the stage, like flooding waters drowning the world. The dancers emerge from its folds and the darkness, their garments – previously blue – now a uniform green, necklaces rattling around their necks like jewellery worn by a lost tribe.

From yoga-like positions featuring slowly extended legs and flexing toes, shared breaths and group work, Habitus intensifies as it develops, incorporating b-boy like breaks, dramatic leaps and controlled falls. The cast dance with objects as often as with one another, referencing the work’s central focus on the materiality of our lives.

Though occasionally episodic, as a whole the piece coheres thanks to its demanding and athletic choreography – though more overtly emphasising a shift in the softened choreographic vocabulary in the final, green-lit sequences following the ‘flooding’ of the world would assist in the sense of a narrative transition.

Overall Habitus impresses, but its impact is drained somewhat by the production’s length, which on opening night felt significantly longer than its advertised 70 minute running time – an impression emphasised by a series of false endings.

Consequently, despite precise, dramatic lighting and a vivid sound design – poetic one moment, the next ominous – Habitus left this reviewer feeling that less is definitely more: an aphorism as equally applicable to choreography as it is to our contemporary, consumerist lifestyles.