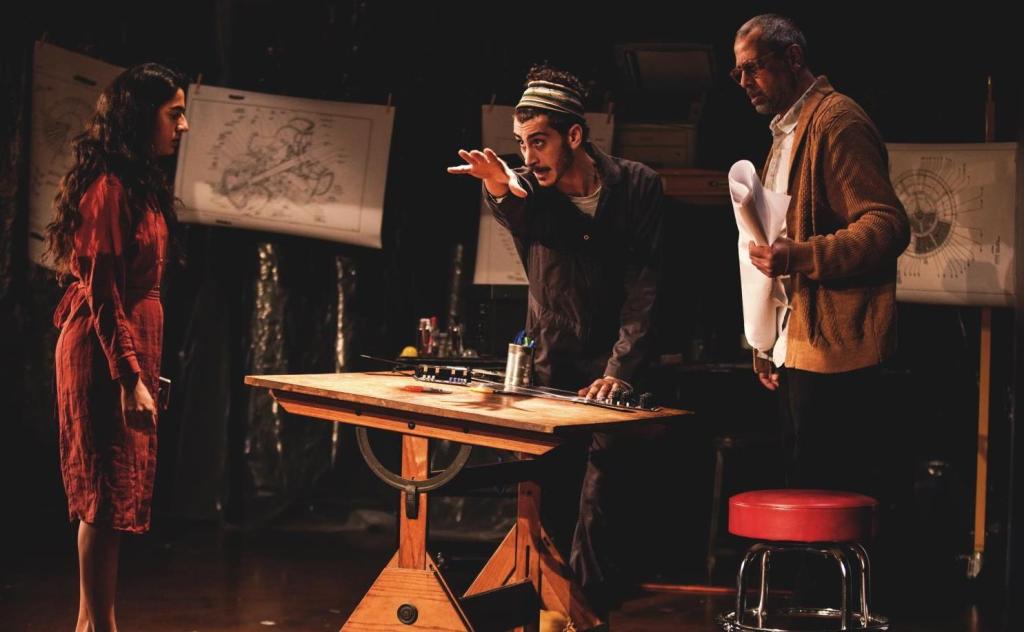 Grey Rock is a Palestinian play about fantasies of escape and rediscovered glory. Against a backdrop of limited freedom and stifled imaginations in the West Bank, one older man, Yusuf (Khalifa Natour), a grieving widower, secretly concocts an outrageous plan to single-handedly build a rocket to the moon. When his plan is discovered by friends and family members, it provokes utter bewilderment and disbelief. But eventually they come around, and soon find themselves embroiled in his outlandish plan. Those involved in the machinations must, on the one hand, fend off accusations from neighbours that Yusuf is working as a collaborator, and, on the other, try to mitigate the dangerous repercussions of rousing the suspicions of the Israeli army. Through ingenious use of social media, they finally overcome the opposition and get the go-ahead to launch their rocket to the moon – a first for Palestine.

This is a brilliantly written comedy that struggles in the execution. This is partly due to the challenges that invariably come with performing in a language that is not your first. Nevertheless, the play’s expansive vision and hopeful message, and its origins in a complex and conflict-ridden political situation, lend it a special significance. The writing is clever and funny, and there are instances of sublime poetry in the script. The single-mindedness with which the characters pursue their outlandish mode of egress calls attention to their desperation to escape their stifling and repressive everyday reality. The absurdity of the plot becomes a part of the play’s implied political critique. Yusuf’s obsession with outer space is the obverse of his frustration with his claustrophobic reality. References to and meditations on entrapment and escape appear throughout the play. The other characters are frequently called upon to justify staying in the West Bank, as if their decision to forego an opportunity to leave is inexplicable.

Yusuf’s daughter, Lila (Fidaa Zaidan), articulates the frustrations of daughters, sisters, wives and lovers who find themselves picking up the pieces of lives shattered by constant conflict. Alaa Shehada plays Lila’s conventionally pragmatic and materialistic fiancé with élan, injecting humour into his confrontations with Lila and her seemingly mad father. Motaz Malhees plays a lovable imam whose respect and affection for Yusuf does not temper his initial condemnation of Yusuf’s bizarre ideas; his patriotism ultimately compels him to support Yusuf’s mission for its potential significance as a breakthrough Palestinian scientific achievement. Ivan Kevork Azazian plays Fadel, Yusuf’s dreamy and adorable protégé and original co-conspirator.

One is left with a lingering sense of uncertainty about whether the playwright’s metaphors extend beyond the immediate context of the comedy. The furore over Yusuf’s secret plan to construct a rocket to the moon could be a reference to fears about clandestine weapon-building, while other parts of the plot hint at self-destructive violence. What is interesting is that even as Yusuf’s solitary mission gradually transforms into a communal one imbued with nationalistic fervour, the play’s focus remains deeply personal.

Ultimately, when Yusuf’s true motivations are revealed, we find that it is profound personal grief, rather than overweening scientific ambition or zealous nationalism, that drives his actions. The playwright invokes the spirit of this complex and multi-layered land and its people’s grief and desperation brilliantly.