A landmark celebration of the music of Nigel Butterley who celebrates his 80th birthday this year.
David Barmby
[This is archived content and may not display in the originally intended format.] 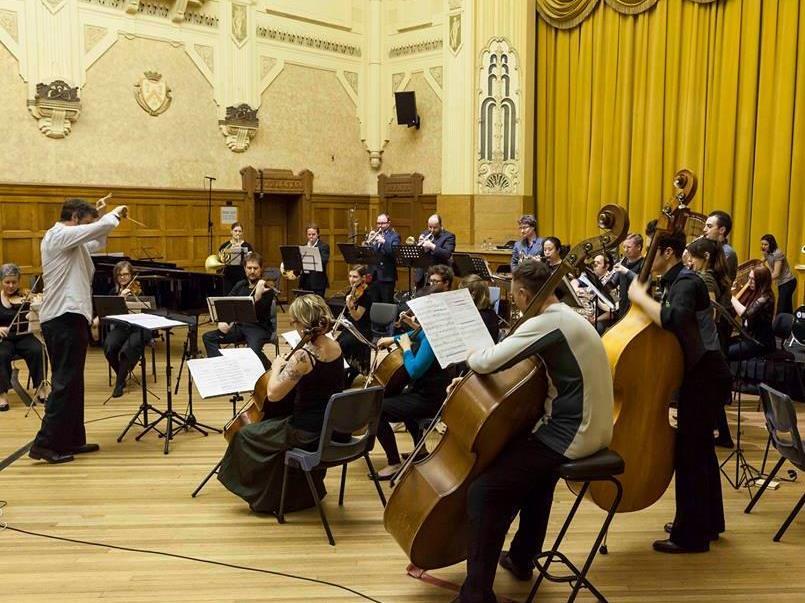 The Arcko Symphonic Ensemble comprised upwards of 60 musicians for this long-planned celebration of Nigel Butterley’s music and his 80th birthday. Conducted by the ensemble’s founder Timothy Phillips, this co-operative of formidable skill performed Butterley’s From Sorrowing Earth (1991) and Elliott Gyger’s From Joyous Leaves (2015), on this occasion receiving its first hearing. Pianist Zubin Kanga contributed the exquisite Butterley miniature Uttering Joyous Leaves (1981) before the featured composer’s large-scale radiophonic work, In the Head the Fire (1966). Throughout this celebration there was a palpable sense of esteem, indeed affection, from the performers, composers present and members of the audience alike towards Nigel Butterley, also present in the Auditorium, who has held his own unique and important voice in Australian contemporary music – as a composer, educator and performer – for nearly six decades.

Elliott Gyger’s From Joyous Leaves, a concerto for piano and chamber orchestra of 26 musicians, is a remarkable composition in many ways. Gyger takes his inspiration from Butterley’s brief solo piano composition Uttering Joyous Leaves, composed for the Sydney International Piano Competition, as the basis of a much larger-scale creation. It was as if all of the Butterley was separated out into its components and re-examined, each component used as the basis of expansion, rather like walking around a sculpture and meditating on various aspects of the whole seen from different singular angles. The Butterley, inspired by poetry by Whitman recounting an oak tree in Louisiana ‘Uttering joyous leaves all its life without a friend or lover near’, includes episodes of spacious poignancy. This sentiment is most beautifully explored by Gyger particularly at the opening of his work, a trio of sinuous solo violas out of which the solo piano organically, vertiginously emanates, and at the conclusion of his concerto, a delicious texture of tremolo xylophone and marimba, celeste and fragmented, fragile piano texture disappearing into sunlight.

Part way through the composition the work explores the percussive sonorities of prepared piano, a touching reference to Butterley’s long association with the prepared piano works of John Cage. I could not help but think that many of the markings in the score – ‘with sober intensity’, ‘quirky’, ‘unexpected’, ‘fragmented’, ‘enigmatic’, ‘on edge’, ’utterly still’, ‘sparkling, with energy’ – acted as a heartfelt portrait of Butterley himself. In sum, from its fecund initial utterances to its exhilarating and cathartic summit, Elliott Gyger’s From Joyous Leaves is an outstanding achievement. Further, I cannot think of a more worthy and deeply satisfying tribute to Nigel Butterley.

The concerto was preceded by the piano composition on which it is based (in his spoken introduction to the concert, Gyger aptly referred to the work as “distilled Butterley”) superbly performed by Zubin Kanga, and the giant radiophonic work In the Head the Fire for orchestras, narrator, various soloists and choirs composed by Butterley in 1966, and which won the Prix Italia. The work was originally recorded in mono and was remixed for stereo when released on LP, the version we heard on Saturday night. Sitting as we did through this nearly half-century-old composition based on the then recently discovered War Scroll (one of the Dead Sea Scrolls), we were reminded of Butterley’s early vivid originality, confidence and virtuosity in writing for voice and orchestra. Butterley had attended the first performance of Britten’s War Requiem in Coventry Cathedral in 1962 and composed the exquisitely beautiful Laudes celebrating four sacred buildings in 1963. He returned from Europe deeply inspired by the numinous. Although it was very good to hear this important composition again, In the Head the Fire is, without doubt, a work of unrestrained, apocalyptic religious fervour. Particularly, much babelesque shouting and commotion accompanied by blaring shofar made for a cerebrally draining first half; without an apparent shared context, the concert would perhaps not have suffered from its excision.

Following interval, we heard a welcome performance of Butterley’s From Sorrowing Earth for full orchestra (1991). Drawing inspiration from poetry by Kathleen Raine, in one long sweep the work is a reflection on the distress of human degradation of the environment (from the opening until its massive breaking point) and the hope of reconciliation (mainly through its gentle, spiritually restorative epilogue).  The work, which deserves far wider attention, is mature Butterley: clear, concise, mostly edgy and crammed with feistiness and intelligence.

The audience was expertly guided by Elliott Gyger’s excellent annotations on each work in the printed program. Timothy Phillips conducted his ensemble through this complex program with surety, restraint and clarity. Zubin Kanga’s performances were masterful; intelligent, imaginative and demonstrating an impressive technique. His balance with the ensemble in the concerto could have improved had he observed the composer’s dynamic markings more strictly; difficult with such an exuberant work. The Arcko Symphonic Ensemble gave outstanding performances of two multifaceted compositions though both could have been improved by each work’s broad structure, narrative and dramatic architecture being more clearly resolved and plainly articulated.

At the conclusion of a long night of intense music-making, Nigel Butterley was warmly acknowledged at the front of the stage and treated to a light-hearted arrangement of Happy Birthday (after his own musical style) before more sustained applause.

This concert will be broadcast by ABC Classic FM on Wednesday, 4 November, 2015 at 9.30pm