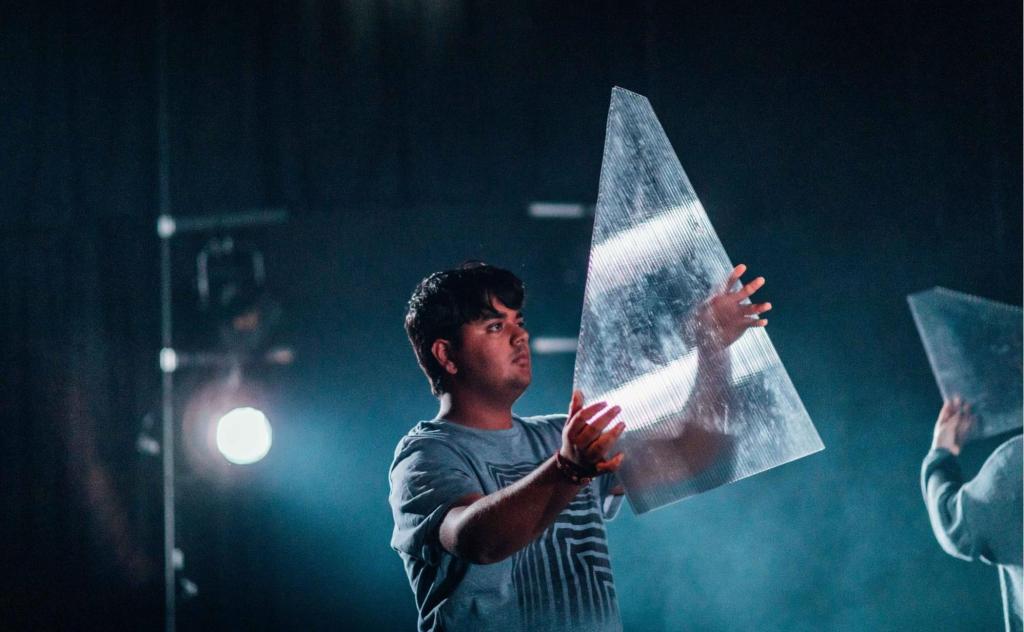 Fragments, written by award-winning Canberra-based author and playwright Maura Pierlot and directed by Shelly Higgs, gives audiences a multi-sensory, embodied experience of what it’s like to be a teenager in distress. The cast delivers the angst-driven script movingly, and are well-supported by an innovative use of set, sound, and lighting. It’s an effective exploration of not quite being able to communicate effectively, and what happens when those around you can’t quite see your reality under fake smiles and photoshopped selfies.

Showing at The Street Theatre, the ensemble cast performs a series of eight monologues along themes of mental illness, neurodiversity, relationship and family issues, coming to terms with the grinding realities of new adulthood, gender identity, and belonging. It’s relatable to anyone who has been young and has either struggled themselves or know someone who has. At the same time, the play integrates more contemporary preoccupations like FOMO, figuring out a social life on Snapchat, and influencer culture on platforms like Instagram and YouTube.

‘People assume that you have to be bleeding and bandaged to be in pain,’ states one character. It’s impossible for her to talk about her distress with others. Another talks about the hardships in his life which come down to how ‘different’ he is. ‘But different to who?’ he asks. Another character seems to almost answer this question when he says ‘If my head’s fucked, it’s not because of who I am, but because no one will let me be who I am.’

The monologues are so separate though; the characters are fragmented, distant. Everyone is worried about how different they are that they don’t realise how normal it is to suffer. The diagnosis as to why is laid out too: ‘Can anyone put down their fucking phone and really see me?’ Everyone struggles to speak, and struggles to appear as they are.

The audience is drawn into each story by the whole on-stage atmosphere. Strobe lights and the sounds of rasping breath contribute to a visceral sense of anxiety. The creeping black sheet stalks a character on the edge of hopelessness, eventually overwhelming him entirely, taking him into a state of depression. And the sounds of tapping and drumming echo the agitated stimming associated with autism. Old-school Nintendo-style video game music immerses us into the experience of a life lived through technology, with an oscillating sense of reality. The unplanned, inarticulate offline world is contrasted with the world of text where it’s easier to be witty and funny. The ‘fragments’ of the title are also part of the set as stylised shards of glass, obscuring the view between characters and the audience.

The monologues are interspersed with more abstract interludes involving emotional expression, combining music and movement. At times, particularly when the cast speaks in unison, these moments feel a little more overwrought than when each character is left to give voice to their interior life, but then, this exaggerated strain is part of youthful distress too. And as Fragments warns us, it’s dangerous to ignore those expressing despair, those in want of attention.

And despite the angst, the script also contains moments of genuine humour, of wit, and of hope. The tragedy isn’t so much the pain the characters feel, but the fact that they’re so consumed by it that they don’t notice that everyone else feels it too. And by pointing this out, Fragments opens up the vital possibility of connection.